You’re Dead to Me - Gypset Magazine

You’re Dead to Me 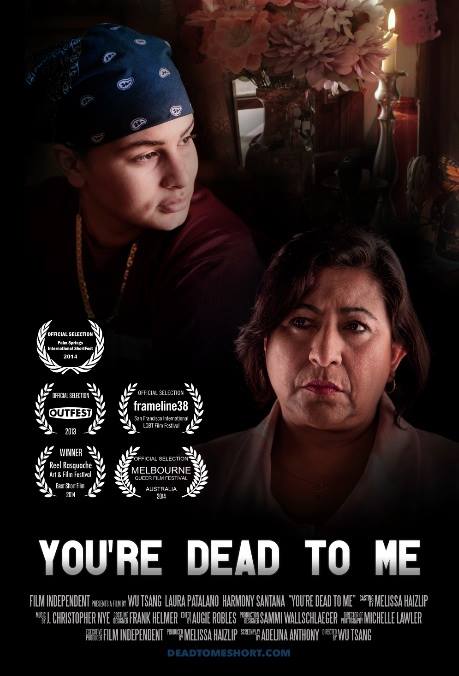 In suburban Inglewood, California, Andrea — a grieving Chicana mother — confronts an unwanted family member before her Día de Muertos celebration. By night’s end, death offers her a choice that she couldn’t make in life.

YOU’RE DEAD TO ME is a new narrative short film executive produced by Film Independent for their signature diversity fellowship, Project: Involve. The short is produced in partnership with the National Minority Consortia for PBS and has an option to air on PBS. YOU’RE DEAD TO ME made its world premiere at Outfest 2013.

YOU’RE DEAD TO ME takes place in suburban Inglewood, California, in 1998. The story begins on the eve of Día de los Muertos (Day of the Dead), a traditional Mexican celebration centered on family gatherings to remember and pray for friends and family members who have died. Two years after the tragic death of her teenage child, Andrea is hosting the celebration for the first time when an unexpected guest pays her a visit. By night’s end, death offers her a choice that she couldn’t make in life.

HARMONY SANTANA (Gabriel) made history at the 2012 Independent Spirit Awards as the first transgender actress to receive a Best Supporting Actress nomination for her role in the compelling coming-out drama GUN HILL ROAD (Sundance, 2011) She earned major buzz for her breakthrough performance as a male teenager trying to live openly as a girl and dealing with a disapproving father (Esai Morales). Santana’s portrayal of Vanessa/Michael, a shy teenager undergoing a sexual transformation, was a case of art imitating life.

WU TSANG has directed several shorts and a feature entitled WILDNESS which won the Grand Jury Prize at Outfest 2012. He was also one of the New York Times T-Magazine’s “Twelve for ’12” creative influencers last year, and works as a visual artist.

About the Director of Photography

Want to volunteer or join our team? Email us:
deadtomeshort@gmail.com

Check out behind the scenes footage on Indiegogo: