Watch Out: The Story of the Watch that’s saving the Planet

Watch Out: The Story of the Watch that’s Saving the Planet

Home » Consciousness » Watch Out: The Story of the Watch that’s Saving the Planet

The idea behind “WeWood” wooden watches is deceptively simple: “You buy a watch, we plant a tree.” End of story, right?

Not even close. WeWood watches are about much more than a pretty face and an odd tree planted here and there. The company is behind a whole movement to not only replenish the barren forests of the world, but to also create jobs, save animals from extinction and preserve nature; all while giving you a gorgeous, unique wooden watch to add to your wrist candy. It’s all in a day’s work for WeWood, who has taken “statement jewelry” to a whole new level.

WeWood was established around 2009 in Florence, Italy, when two designers and accessory distributors, Alessandro Rosano and Daniele Guidi, put their heads together to create something that was at once sophisticated and fashionable, but also sustainable and natural. The idea of using reclaimed wood was brought up.

Reclaimed wood, simply put, is wood recovered from old buildings, warehouses and furniture built long ago (during the Industrial Revolution, for instance) and is re-purposed for something new, without cutting down a single tree. It is sustainability in its essence. From an aesthetic standpoint, using reclaimed, “old” wood in design and architecture has become immensely popular as younger, modern-day trees simply lack the same sumptuous character of century-old wood.

And so “WeWood” was born and in 2010 it opened its first office in Los Angeles.

WeWood uses mostly reclaimed scrap wood sourced from dozens of different trees from all over the world, giving the watches a natural look that not only showcases the diverse beauty found in nature, but also proves just how unique different woods can be. Among the many kinds of wood used for the watches is the “African Blackwood”: a deep black, dense wood found in southern Africa and used to make instruments such a oboes and clarinets. 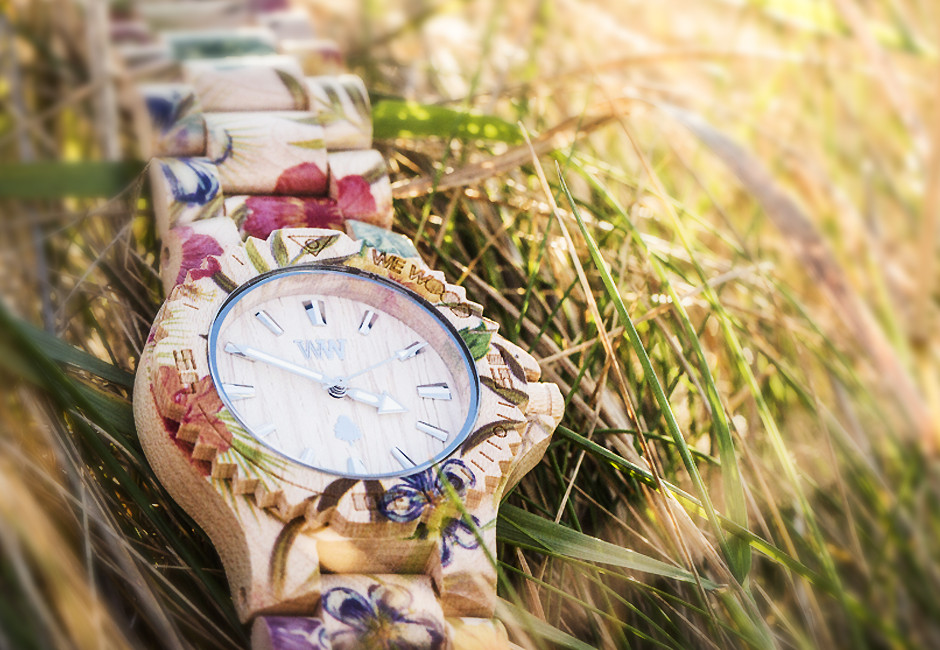 Another example is the well-known maple wood, a dirty-blonde, beige wood found in the U.S usually used for smokehouses and kitchen appliances.

The variety of woods used ensures that every single watch is unique: the beautiful coloration and hues in the wood and subtle changes in grain are different in each watch. So if you’ve set your heart on a ridiculously popular model like the “Date Beige” don’t worry! You’ll still have a one-of-a-kind watch. Following a trend, without compromising individuality- we love that. The watches are designed in Italy and produced in Indonesia and China and aside from the glass and clockwork inside, the watch is completely natural, hypo-allergenic and chemical-free. The movement inside is provided by the Japanese company “Miyota.” 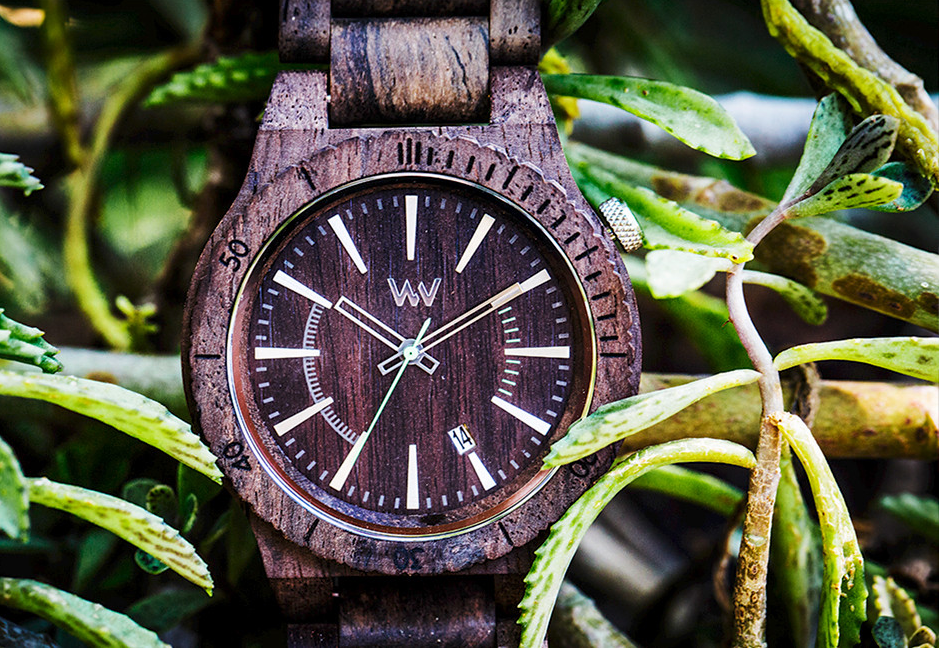 Giving Back- the Warm and Fuzzies:

With humans cutting down around 15 billion trees each year and indigenous forests rapidly shrinking, WeWood sought to start replacing and saving some of these forests by giving back. Literally. WeWood has partnered with “Trees for The Future” and “America Forests” to replant trees in areas affected by deforestation, wildfires and drought. To date, they have planted over 420,000 trees worldwide, with a goal to plant 1 million by 2020.

Their green thumbs have touched vast areas of California, including the San Bernardino Mountains ravaged by wildfires between 2003-2007 where they planted 25,000 new trees across 500 acres. For another project in the “Klamath National Forests,” the replanting of trees helped save the habitat of endangered animals like the Chinook salmon and California spotted owl. The project mostly plants sugar pines and other trees from the conifer family, as they grow quickly and dramatically improve air quality. Moreover, researchers have found that 2nd generation, young trees planted on deforested ground or on patches ravaged by wildfires, are able to absorb a much greater amount of carbon than the older-growth trees they replaced. With air pollution and smog on the rise, we really can’t have enough of those young conifers. WeWood has reforesting projects all over the world, like one in Ethiopia appropriately dubbed “Planting Out Poverty.” The replanting project has helped impoverished communities in the area find work, grow food and help revitalize soil that has degraded over time. 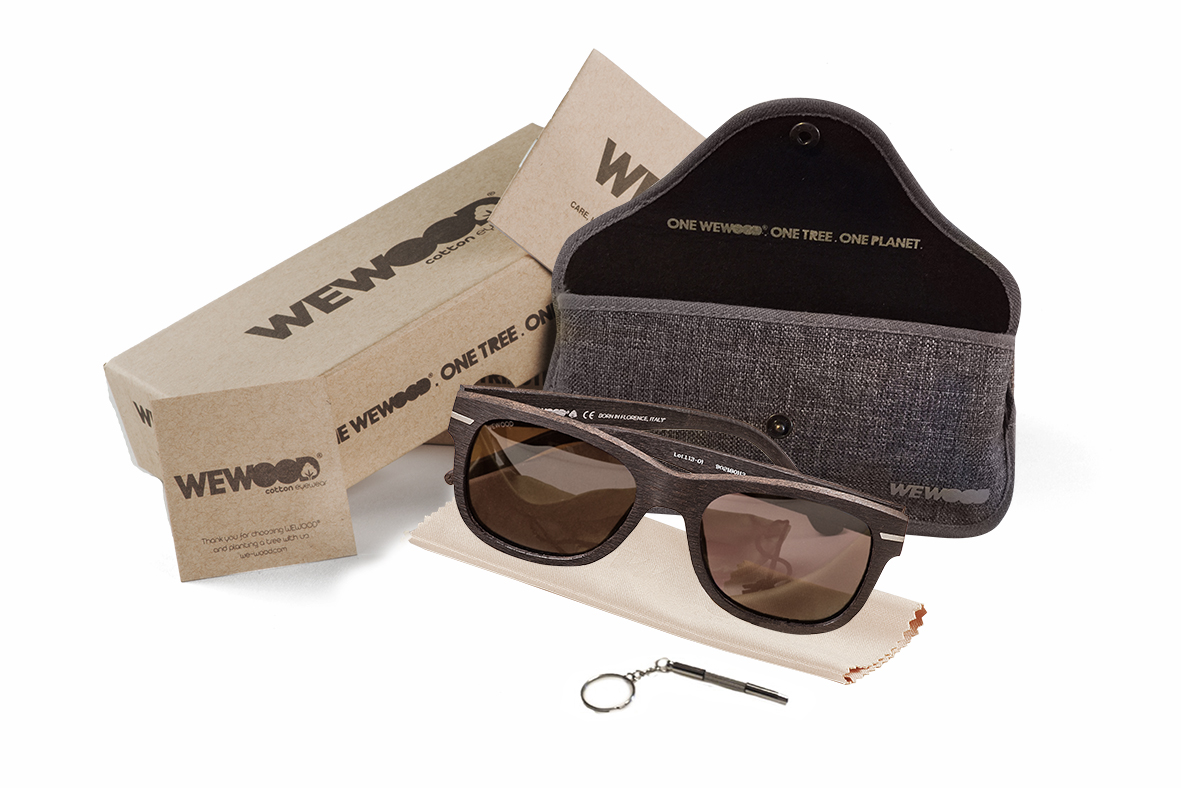 What makes WeWood so great, though, is that it provides an essential accessory that appeals to anyone- from an eco-conscious vegan to a trendy fashionista, to the gypsetter in-between- all while helping to protect the environment. As the name implies, it calls on all of us to stand as a collective “we,” and take action to preserve our ailing planet. And the time has never been more right. WeWood, like the trees it came from, has grown enormously over the years. They have expanded and included “cotton eye wear” in their range, which is sustainable-produced sunglasses made from cotton fiber. WeWood now has offices in Australia, the UK and Brazil and has been featured in countless magazines like Italian Vogue with celebrities like Colin Firth and Jesse Williams sporting their own watches.