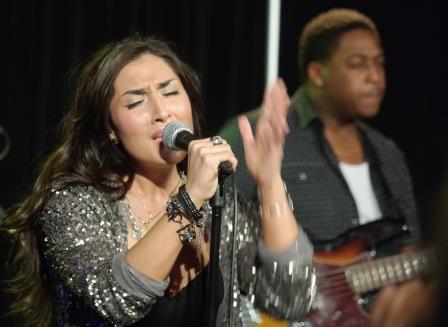 Vanessa Campagna has sung with symphonies, she has shared the stage with Reba and Blake Shelton and Loretta Lynn, she can and does belt pop and rock with the best of them, she has been on Star Search, she wrote the music for an Oscar winning film, and has herself been the subject of a PBS documentary. And that is only the beginning of the career of a 22-year old woman the press has called a “vocal powerhouse”,  a “precociously gifted entertainer” and a “singer reminiscent of a  young Celine Dion”.  I can attest to every single one of those adjectives – I saw her recently live at an exclusive WorldArts concert and could feel the electricity flowing from her every note and gesture. Music FridayLive! was able to talk to her the next day after she arrived home in Nashville. 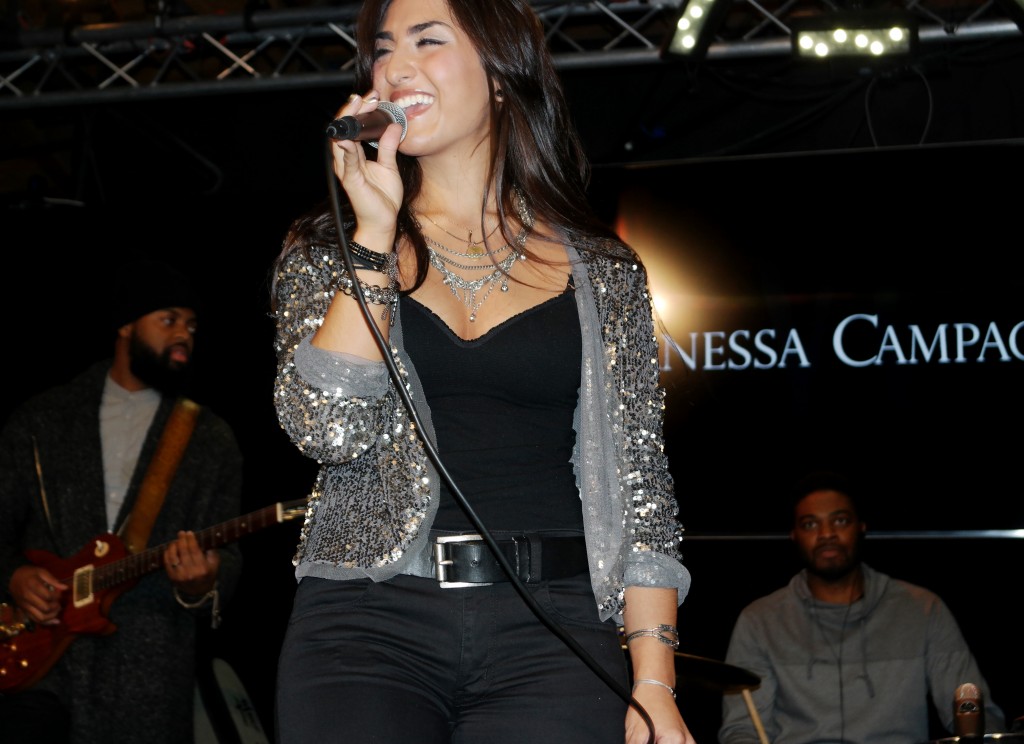 Patrick. You are  back home now. Are you in the midst of a song writing project – I understand that songs do get written in Nashville?

Vanessa. Yes.  I am actually from Pittsburg Pennsylvania.  I moved to Nashville a year ago when I got a publishing deal right out of high school.  I was flying back and forth for that whole period to write songs so I decided I need to move here and I did.  I love it here. I am writing and recording songs for myself and for other artists.  That is what I am doing here in Tennessee.

Patrick. How did WorldArts in LA find you.  They only showcase the best talent, so it is an honor.  Do they have spies in Nashville?

Vanessa. I started working with Desmond Child, who wrote “Livin on a Prayer” and “Living the Vida Loca” for Ricky Martin, and songs for Katie Perry, Aerosmith, Bon Jovi, Kiss and others.  He  lives here in Nashville and we got introduced through a mutual friends and he said he wanted to work with me and he started picking out shows for me to sing at the Latin Songwriters Hall of Fame Awards – the  La Musa Awards —  in Miami. World Arts is a sponsor and I became a WorldArts talent through that show.  WorldArts is amazing- a free platform for musicians to showcase their talent.  I love it.

Patrick. In the intro I listed some of your accomplishments – classical singer, county western singer/songwriter, big-stage rock pop musician.  Was crossing all those lines – except country and rock which are essentially the same thing now – from singing with symphonies to singing music you can dance to;  was that  difficult or did it just come naturally to you:

Vanessa. You know, it is not hard for me to cross over.  I have been singing since I was 5 years old and I am 22 now and it is just like singing is my life – my second nature. I started with a country band when I was younger and then I started touring and it was intertwined.  I would sing with a country band on Friday and then on Saturday with the symphony and on Sunday I was singing oldies like Connie Francis and Doris Day.  I love all kinds of music and if I can relate to it, I can put everything I have into it.

Patrick. You seem to have acquired a bit of a Southern accent when you sing country.  Where did that come from?

Vanessa. I have always had a little twang in my voice because my dad played country music and I heard it a lot.  But it is has become more prominent since I moved here because everyone around me has a Southern twang.  People hear me and say “oh no, are you are Southern now!”

Patrick. I can understand them asking that question when I hear you sing country. You were singing classically under the direction of  the late Marvin Hamlisch, a classical composer/conductor/director,  and now you are writing songs in Nashville, so  I can understand your friends surprise at your Southern accent.  Do you ever take out your classical music and sing it?

Vanessa. I do. I perform a lot with symphonies.  I just did the Pittsburg Symphony Orchestra Christmas Pops concert, so I went home to Pittsburg for that.  I performed on that and I also did a tribute to Marvin Hamlich a couple of years ago. I did a Christmas show too. When I performed at the Latin Music Awards that was with the Miami Orchestra, so I am still very involved in the classical side of things.  Being around that so much growing, up you can really hear it in the music I am making now – big string sections and very cinematic sounds. 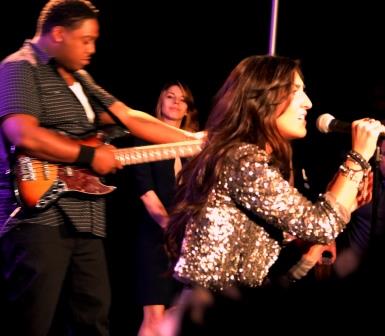 Patrick. It also accounts for the pictures of you in the fabulous gowns in symphony halls.  Now, your song “What’s It Gonna Take?” is great up-to-date modern pop rock, although there is a bit of country if you listen close. did you write it?

Vanessa. I wrote it with two friends of mine, Derek George and Chuck Jones, both big Nashville songwriters. Both of them have written for some of the greats and I was very honored to write with them – that was the first song that I ever wrote with them and now I write with them regularly.

Patrick. Something that came through dramatically in your live show is your connection to the audience. You talked with them naturally, directly and personally.  Is that just you, or have you studied stage presence over the years and perfected that?

Vanessa. I am very comfortable on stage,. If there are only 5 people in the audience I would probably be nervous, but when there are like, 300, I am fine.  I have performed before 20,000 to 30,000 people and it is just natural…I get so excited to be out there that I don’t have any nervousness. It just comes naturally for me.  I have been performing on stage since I was very young and one of the people I worked was Walt Maddox, an original member of the Marcels who recorded many hits like “Blue Moon”.  He always said to me that you can be a great singer, but you need to be an amazing performer. I remember that for every single show that is a huge thing that makes me what I am today as a performer.

Patrick. Let me ask you about songwriting.  Nashville has a reputation as a songwriting factory – another successful singer/songwriter I know spent a couple of years there and said she learned songwriting in Nashville and music in Los Angeles – that there is a format you learn in Nashville that gives you a template for a certain genre, then you come to LA, forget the template and learn to write all kinds of music.  What do you say to that?

Vanessa. I think it is different for each artist.  I started writing songs when I was 11, but I thought they probably won’t mean anything because being a singer was first for me – and it still is.  But then I had a showcase in Nashville and some people there loved my songwriting and offered me a publishing deal.  Through that deal I met people who were way, way more seasoned than I was.  I learned the craft much better and since then every single co-write that I have is a new learning experience.  So I have learned a ton about music and also a ton about songwriting. It is different for each artist.

Patrick. What is the difference between writing songs for yourself and writing for others.

Vanessa. For me, it is what kind of music I am writing.  If I am going to write a pop song, lyrics are sometimes more simple, diverse, or extreme.  If I am writing for a country artist, I write to fit that genre.  I was part of a  EDM  songwriting camp and I wrote only a chorus and a pre-chorus and a verse.  For country you have to write the whole song and really explain  it.  For pop, the words don’t always have to make sense – they just have to sound cool.

Patrick. Do you agree that country and rock have become essentially the same thing?

Vanessa. Yes, and there is even a little hip hop in country now.  I didn’t grow up in the classic country era, so I only know what is happening right now, so morphing it together is kind of easy.

Patrick. Your song, “How Was I To Know?” strikes a deep chord in any listener’s heart.  The hook is addictive, the sentiment is familiar yet personal, the delivery is stunning.  How did that come about—and how do you describe it in terms of your own development?

Vanessa. It is funny you ask because that is the only song I did not write, but there is a personal story behind it for me.  That song was written by a good friend of mine about his ex-girlfriend, who was my best friend.  He was so heartbroken he was totally in this place of “I was planning my life with you and you were planning on walking away”.  I remember my best friend saying he played that song for her when they began speaking after the breakup and it was so emotional for her.  I told her I wanted to record it on my album and she said she didn’t want anyone to sing it but me.

Patrick. That is why it is such a great song.

Vanessa. It is a very relatable song – everybody can relate to the heartbreak,.  Music is therapy.

Patrick.  Was success so early good or bad for you?

Vanessa.  That is a very good question.  I think in my case was good for me.  My parents made sure I had a balanced life.  Early success allowed me to meet many great people and work with them. It was a good thing for me.

Patrick. Are you bi-lingual?

Vanessa. I can sing in English and Spanish, but I can’t speak Spanish.

Patrick.  Vanessa, thank you for talking with us.  Will you be back in LA?

Vanessa.  I don’t know yet, but when I have a show, I will post it all over my social media and on the WorldArts website. 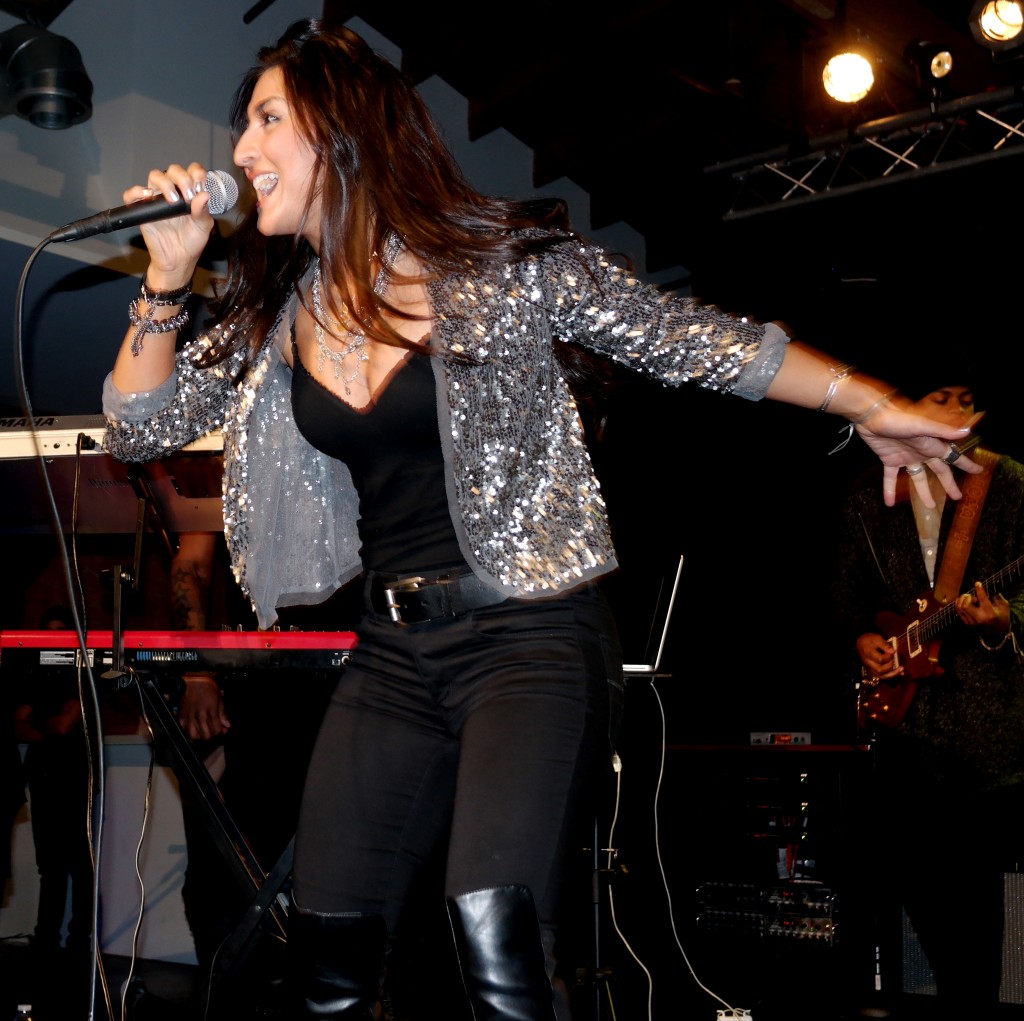 Albums available on the website and at CD Baby