“Tommy Torres (the producer/songwriter behind hit singles from Ricky Martin, Alejandro Sanz, and many others) has spent over a decade as a solo star and genre hero… Although the tonal palette he draws from is undeniably radio-ready, Torres’ production style leans towards the dark, hipper side – an evocative sonic fabric, significantly more sophisticated than standard pop fare… Torres has an inscrutable melodic sense and taste for subtle lyricism [that] pushes the envelope on several fronts at once” – All Music 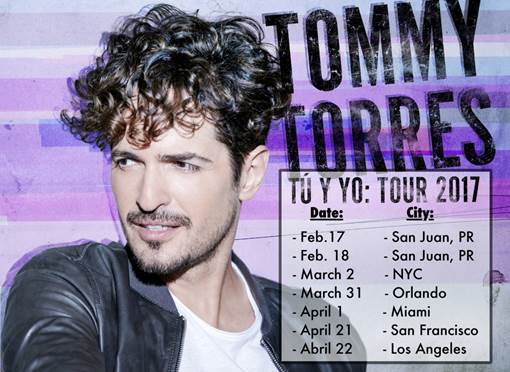 “One of the most-anticipated Latin Tours of 2017” – Billboard

Tommy Torres has, without question, been one of Latin Music’s most respected creative forces over the last decade – collecting multiple GRAMMY and Latin Grammy Awards and ASCAP’s “Composer of the Year” honor for his work with artists such as Juan Luis Guerra, Ricky Martin, Alicia Keys, Draco Rosa, Nelly Furtdado  & more, while also releasing five albums of his own.   In  addition to his recent production work on Jesse & Joy’s award winning album Un Besito Más,   Torres has also continued his collaborative nature as a performing artist – appearing on tracks with Diana Fuentes and Gaby Moreno, composing a spontaneous post-election song that went viral and recently releasing the unique duet “Tú y Yo” with Daddy Yankee.

Now, taking the song title to heart, wanting to return to the stage to once again connect directly with fans, Torres will launch a series of Tú y Yo (You & Me) tour dates.  The run will begin in Torres’ native Puerto Rico with two nights (Feb 17 &18) at the island’s top arena – with the second date added to meet fan demand following the first night selling out.  After the tandem shows at the Coliseo de Puerto Rico, Tommy Torres will take to road for concerts in New York, Orlando, Miami, San Francisco and Los Angeles:

“Tú y Yo  is an example of when a musical collaboration from two different genres is done right. Both Tommy Torres and Daddy Yankee stayed true to their legendary sound, but joined forces to make magic.” – E! News