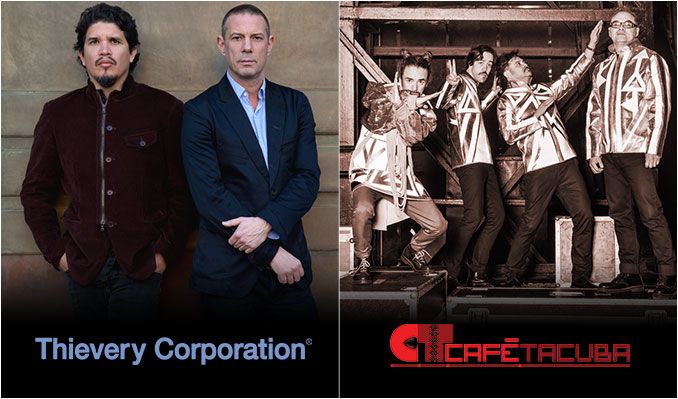 Thievery Corporation & Café Tacvba make their return to the Santa Barbara Bowl with a very special co-headlining performance on Saturday, October 1 at 6:30 PM. Tickets go on sale Saturday, July 23 at 11:00 AM.

When they met in the mid-1990s, Thievery Corporation’s Eric Hilton and Rob Garza instantly bonded over their shared passion for bossa nova. Dedicating their 1996 debut Sounds from the Thievery Hi-Fi to bossa nova pioneer Antonio Carlos Jobim, the Washington, D.C.-based duo have spent nearly two decades creating boundary-warping, complexly crafted electronic music partly inspired by bossa nova’s intricate rhythms and lush textures. Now, with their seventh studio album Saudade, Thievery Corporation present their first release devoted entirely to the Brazilian-born genre that first connected them. “We always try to progress into something different and stretch our musical chops, and taking a whole album to dive into this one sound seemed like a really great way to do that,” says Hilton. Adds Garza: “It’s a bit of a departure for us, but at the same time these are our roots, this is what brought us together. It’s us coming full circle from electronic music back to something organic before we move on to our next chapter.”

Café Tacvba is a band from Ciudad Satélite, Mexico. The group gained popularity in the early 1990s. They were founded in 1989, and since then have had the same musical lineup of Rubén Isaac Albarrán Ortega (lead vocals, rhythm guitar), Emmanuel “Meme” del Real Díaz (keyboards, piano, programming, rhythm guitar, melodica, vocals), José Alfredo “Joselo” Rangel Arroyo (lead guitar, vocals), and Enrique “Quique” Rangel Arroyo: (bass guitar, electric upright bass, vocals). Mexican folk music player Alejandro Flores is considered the 5th tacubo, as he has played the violin in almost every Café Tacvba concert since 1994. Since the Cuatro Caminos World Tour, Luis “El Children” Ledezma has played the drums in every concert but is not considered an official member of the band.

The group’s debut album, Café Tacvba, was released in 1992 and was extremely popular in Mexico. The group experimented with many different musical styles, from punk and ska, to electronica and hip hop, to regional Mexican varieties such norteño, bolero, and ranchera. Café Tacuva released For press inquiries / more information please contact Jessica Puchli at Goldenvoice Jessica@Goldenvoice.com ~ 323-900-3891 five singles from the album – “María,” “Rarotonga,” “Las Persianas,” “La Chica Banda” and “Las Batallas” – with a music video filmed for each, with the exception of the latter. “María,” directed by Gustavo Garzón, was nominated for Video of the Year at the Lo Nuestro Awards of 1993.

In 2007 Café Tacvba released Sino. The album has been compared to classic rock groups such as The Who and the Beach Boys, a departure from their previous techno and funk-influenced sound. The band also performed on the main stage at Lollapalooza that summer. On September 10, 2008, Café Tacvba became the leading nominee at the Latin Grammy Awards of 2008 with nominations including Album of the Year and Alternative Music Album, for Sino. In 2008, the band collaborated with Puerto Rican duo Calle 13 on the song “No Hay Nadie Como Tú.” The song peaked at number 23 on the Billboard Hot Latin Songs and number 15 on the Billboard Latin Rhythm Airplay.