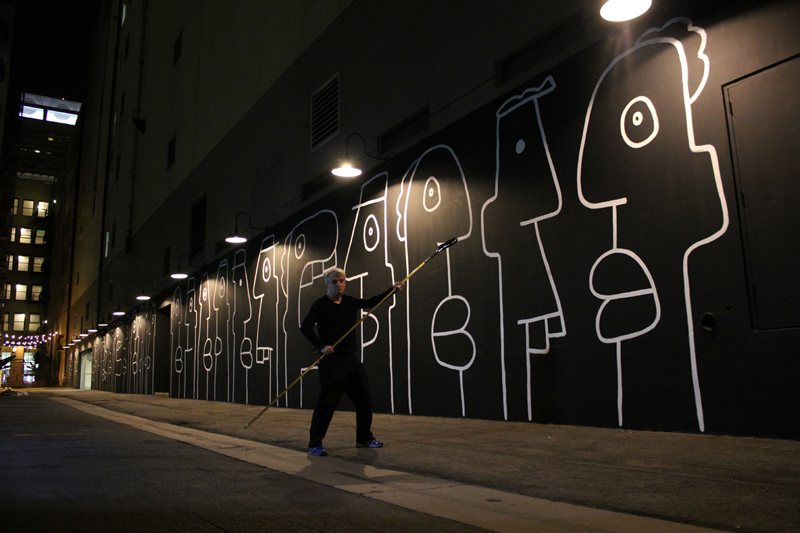 From 9th October, Howard Griffin Gallery presents a retrospective of the life and work of infamous Berlin Wall artist Thierry Noir. In 1984, Noir was the first artist to illegally paint mile upon mile of the Berlin Wall. Noir wanted to perform one real revolutionary act: to paint the Wall, to transform it, to make it ridiculous, and ultimately to help destroy it. Noir’s iconic, bright and seemingly innocent works painted on this deadly border symbolised a sole act of defiance and a lone voice of freedom. In this landmark exhibition for Howard Griffin Gallery in Los Angeles, the artist’s first US solo exhibition, original works will be exhibited on a concrete wall bisecting the space alongside rarely seen photographs, interviews and films, juxtaposing old and new to reassess Noir’s enduring legacy and contribution to society. The event also marks another first as the inaugural Los Angeles exhibition for Howard Griffin Gallery.

A number of artists, musicians and free thinkers settled in West Berlin during the 1980s despite the difficulties of the time. Within a group which included David Bowie and Iggy Pop, was a rebellious young French artist called Thierry Noir. Thierry Noir was born in 1958 in Lyon, France and moved to Berlin in 1982 with one suitcase. By chance he settled in a squat overlooking the Wall at the border of East and West Berlin. One day in 1984 Noir spontaneously started to paint the Wall and continued to do so each day for five years with whatever paint he could scavenge from nearby construction sites. Noir’s aim was not to embellish the Wall but to demystify it. As Noir says, “I did nothing but react to its sadness.” During this time Noir would sell small paintings on cardboard at local restaurants to survive.

Since this time, Noir’s exploits and highly distinctive visual language have become world famous and immortalised in popular culture such as Wim Wenders’ 1987 film Wings of Desire and the cover of U2’s album Acthung Baby. It is remarkable, then, that ‘Thierry Noir: A Retrospective’, held in the 25th anniversary year of the fall of the Berlin Wall, is also Noir’s retrospective.

Noir is today being increasingly recognised as a key forerunner of the modern street art movement and in 2014 has worked outdoors in across the world alongside renowned international street artists of the current generation such as Phlegm and ROA. Noir is also compared with contemporaneous New York pop artist Keith Haring also born in 1958 and who likewise began his career on the streets.

Noir’s practice has a strong emphasis on line and aims to simplify forms to their most basic elements. This simplicity reflected the necessity of painting quickly outdoors in a hazardous environment with very real risks to his personal safety. Noir reacted to his environment and his monsters are a metaphor for the wall itself, each one relating to his experiences or feelings of what he calls a ‘killing machine’. His enormous murals in vivid colours represented both a personal response to the oppressive environment he found himself in and a poignant political monument that is just as relevant in the 21st Century as it was at the height of the Cold War. Visually, his iconic style is the very embodiment of 1980s Berlin and conjures up a timeless nostalgia for this cultural era.

Thirty years later, Howard Griffin Gallery is bringing Noir to Los Angeles, offering a unique opportunity to look back at the story of this notorious artist alongside new works.

This week Thierry Noir painted a 700 square feet commemorative mural on South Spring Street as a gift to the City of Los Angeles in recognition of the near half-century Sister Cities relationship between Berlin and Los Angeles.. The mural particularly commemorates the 25th anniversary of the fall of the Berlin Wall on 9th November. In the next week Thierry Noir will also paint a second mural on Sunset Boulevard in Hollywood on the Caviar building next to the Cinerama Dome.

Noir’s latest public murals in Los Angeles will continue to inspire and promote a message of freedom in the United States of America and around the world. As Noir says, “They are a symbol of a freedom that does not come from the sky, a freedom that is not given to you, but a freedom that you have to fight for.” 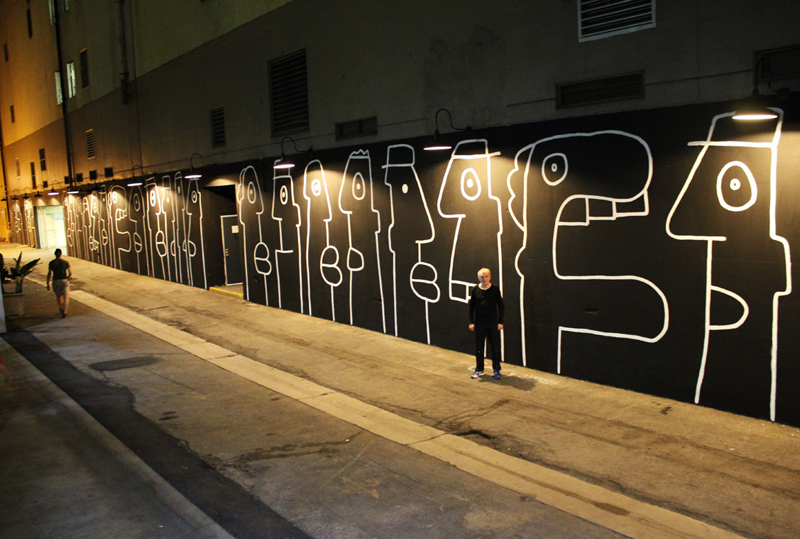 Thierry Noir mural on South Spring Street. The mural is the longest mural that Noir has painted since painting the Berlin Wall in the 1980s. 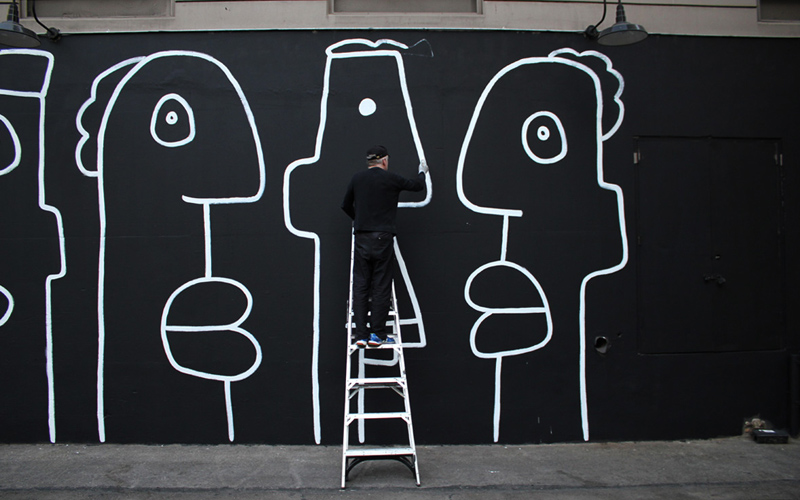 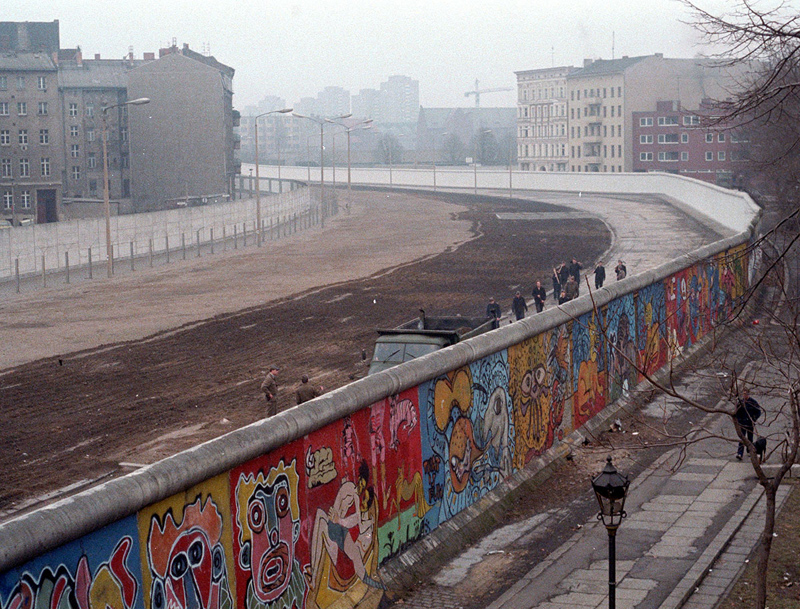 The view of the Berlin Wall as painted by Thierry Noir from the window of the squat where Thierry Noir lived in 1980s Berlin. 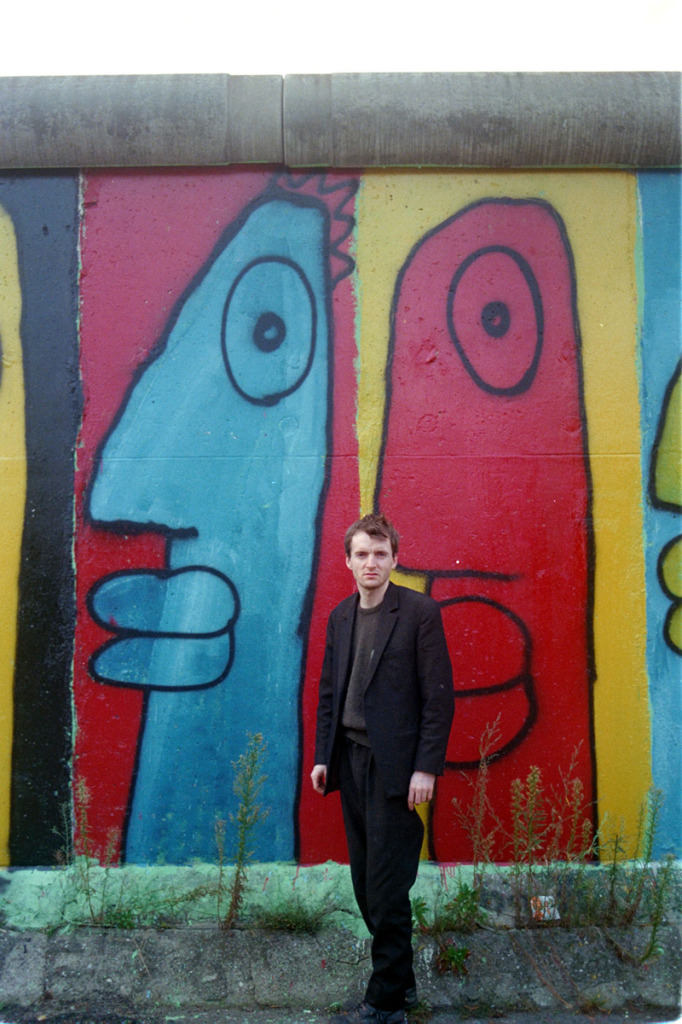 Thierry Noir at the Berlin Wall in the 1980s 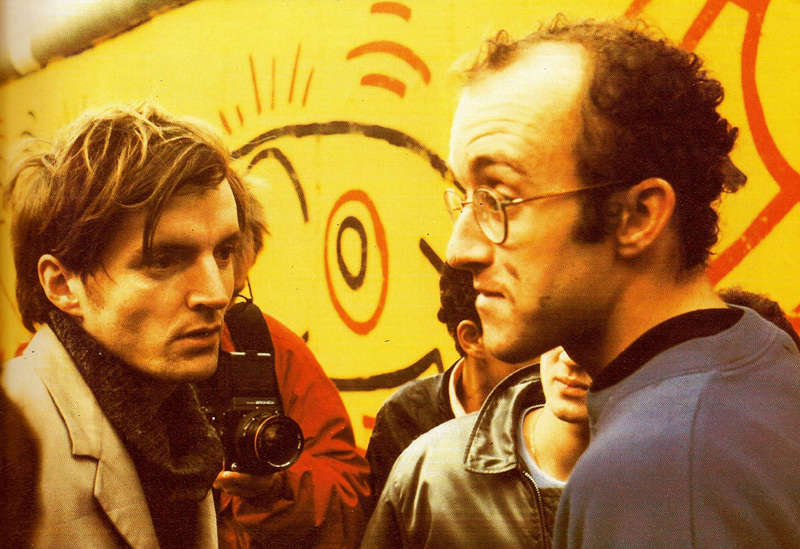 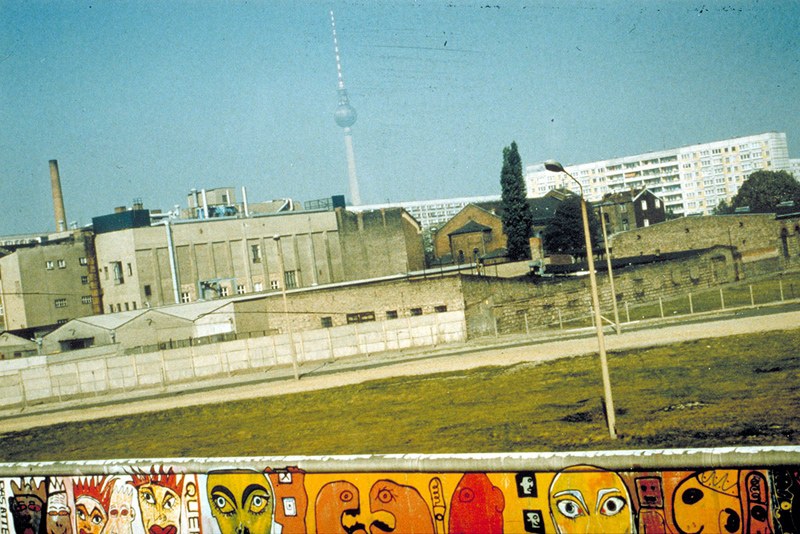 Segments of Noir Berlin Wall featured in Wim Wender’s Wings of Desire. These pieces were auctioned in Monte Carlo and are now held in a private collection in New York City. 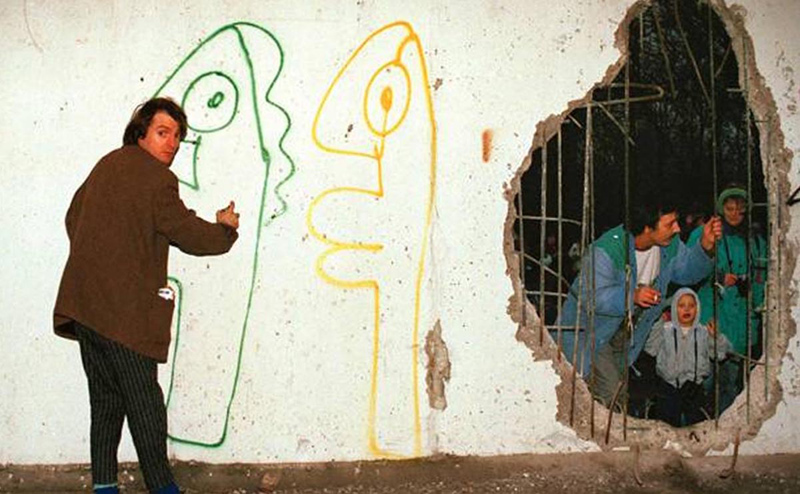 Noir painting the back of the Berlin Wall in the death strip as the Wall started to come down. 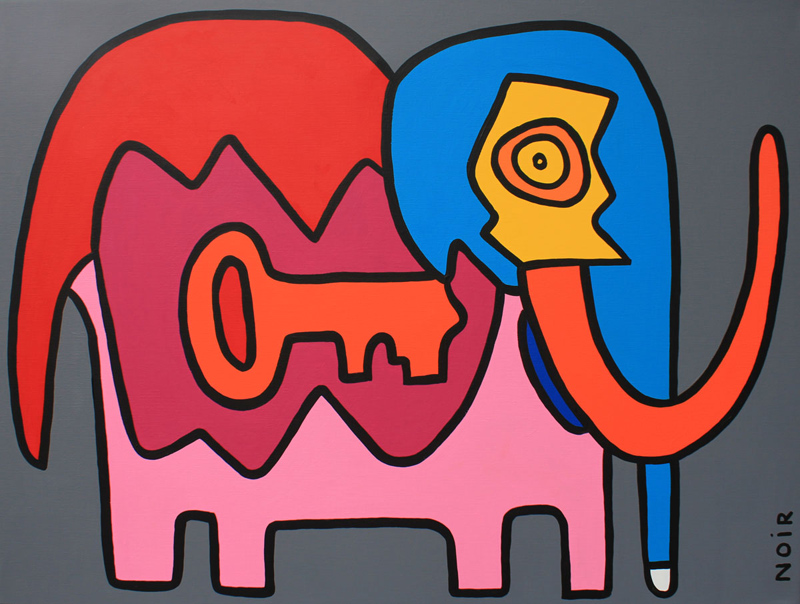 The iconic and timeless visual language of Thierry Noir. 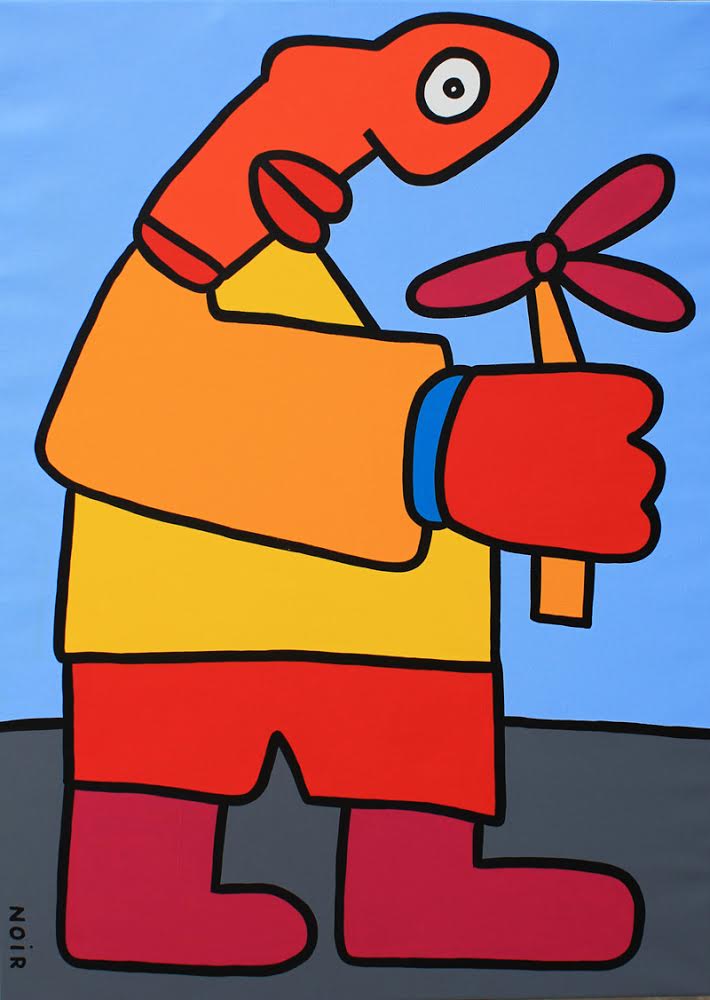 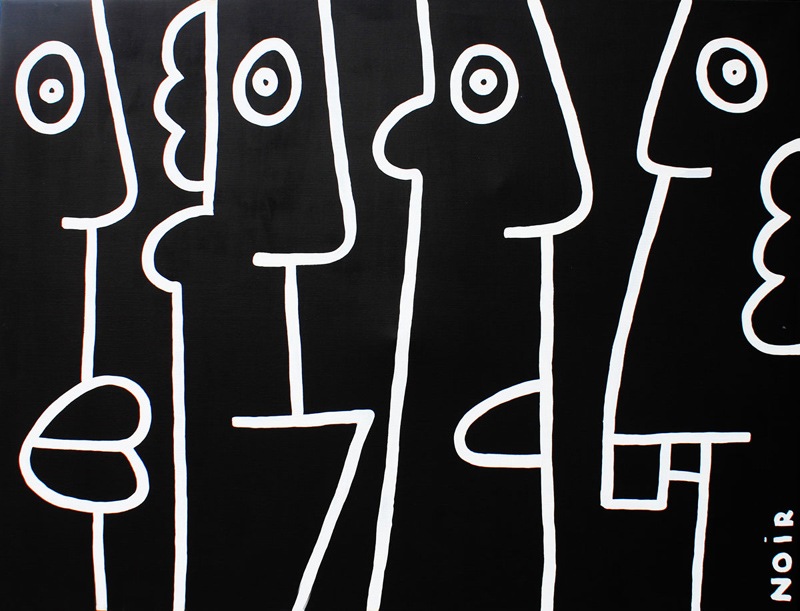