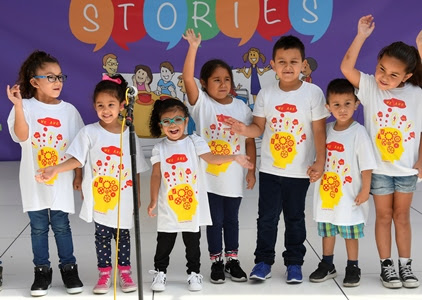 – More Than 3,000 Students Are Stars for a Day in Performances in Front of The Music Center’s Walt Disney Concert Hall –

The Music Center’s 40th Annual Very Special Arts Festival today welcomed more than 3,000 K-12 students of all abilities from all over Los Angeles County to celebrate their artistic achievements, explore the arts and connect with one another along with their mainstream peers.  More than 90 schools attended this year’s free festival, the only one of its kind in the County, which included live performances of music and movement from nearly 30 school groups and a display of hundreds of pieces of student artwork based on the festival’s theme “Celebrate!”

“By celebrating students of all abilities, The Music Center’s Very Special Arts Festival provides a platform for our students to express themselves, share their creative achievements and experience how the arts can transform lives,” said Keith Wyffels, associate vice president, education of The Music Center.  “Over the past 40 years, this multilayered festival has touched the lives of hundreds of thousands of young people, their families and their teachers, and underscored The Music Center’s commitment to deepening the lives of Angelenos through the arts.”

During the event, Grand Avenue came alive in front of the Concert Hall with a wide range of student performances, including instrumental, vocal, dance and other presentations.  The younger students also enjoyed interacting with a number of high school students, including visual arts and theatre students from Los Angeles County High School for the Arts (LACHSA), which sponsored a face painting workshop; and LACHSA dance students who conducted dance lessons for the students at an on-site disco.