The Darkness Movie In Theaters May, Friday the 13th, 2016 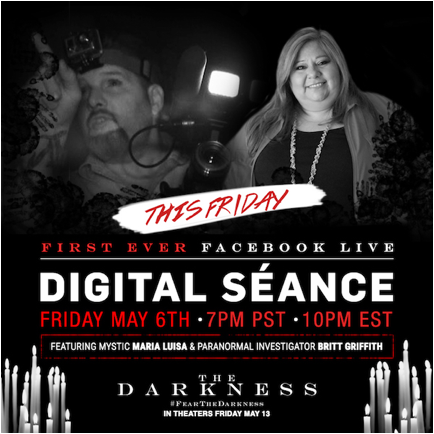 Have you ever wanted to experience a séance? Perhaps reach out to an old spirit? Well, now’s your chance, and just in time for Friday the 13th! In celebration of THE DARKNESS opening in theaters May 13th, the film will be hosting a LIVE digital séance on Friday, May 6th at 7PM PST. You might be wondering what exactly that means. Go to THE DARKNESS’ Facebook page to witness celebrity medium, Mistica Maria Louisa and Ghost Hunter’s Paranormal Investigator, Britt Griffith @ the Botanica San Simon in Los Angeles, as they reach out to the ancestral Anasazi tribe as well as do readings from select Facebook fans. Britt is bringing his gear, so be sure to keep watching as he will be continuously monitoring the room. Please find additional information below and get ready to participate in the FIRST EVER digital séance!

WHO: Britt Griffith, Maria Luisa, and YOU

Britt’s lifelong hobbies is investigating claims of the paranormal, which led him to a friendship with Jason Hawes. In 2008 Jason reached out to Britt and asked if he would like to assist on an important case they had coming up. Britt said yes, and now finds himself working all over the world in front of the camera investigating the paranormal. Britt makes appearances at multiple guest events all over the country, where he lectures and leads paranormal investigations. He has also worked on Ghost Hunters, the Food Network Challenge, Run This Town, RWG, and can be seen in Two De Force, Chillerama, and Azinda.

There have been many popular TV shows and films about psychics, mediums, clairvoyants and people with similar gifts. On television there were the fictional “The Ghost Whisperer” and “Medium,” as well as other programs hosted by real life “seers” (someone who predicts things that will happen in the future), such as Edward in “Crossing Over” and James Van Praagh (who co­executive produced “The Ghost Whisperer”) in short lived show of his own, “Beyond with James Van Praagh”. Maria Luisa Mispireta is one of the most important “seers” from Latin America who moved from her native Peru to Los Angeles when she was 15 years old. In her professional practice she has an array of clients, from local residents to celebrities and law enforcement.

The Anasazi are an ancient people that lived thousands of years ago in the desert canyons in the southwest of North America. According to believers, the Anasazi either had seen aliens, were abducted by them or were aliens themselves. According to their prophecy, the Blue Star Kachina will be visible to all, and the Day of Purification will realized. It is said that if they are unable to find uncorrupted men and women, that the earth will be completely destroyed and none will be spared. However, if they are successful in bringing the symbols and finding those who still follow the true Hopi way of life, the world will be created anew and all the faithful will be saved from destruction. Through the Facebook LIVE event, Maria Luisa and Britt Griffith will be trying to make contact with their spirits.

The Darkness Movie In Theaters May, Friday the 13th, 2016

From the director of the cult classic, WOLF CREEK, Greg McLean, comes the supernatural thriller THE DARKNESS, opening nationwide May 13th, 2016. As a family returns home from vacation at the Grand Canyon, they innocently bring home a supernatural force to be that of the Anasazi Tribe that preys off their own fears and vulnerabilities, threatening to destroy them from within, while consuming their lives with terrifying consequences.