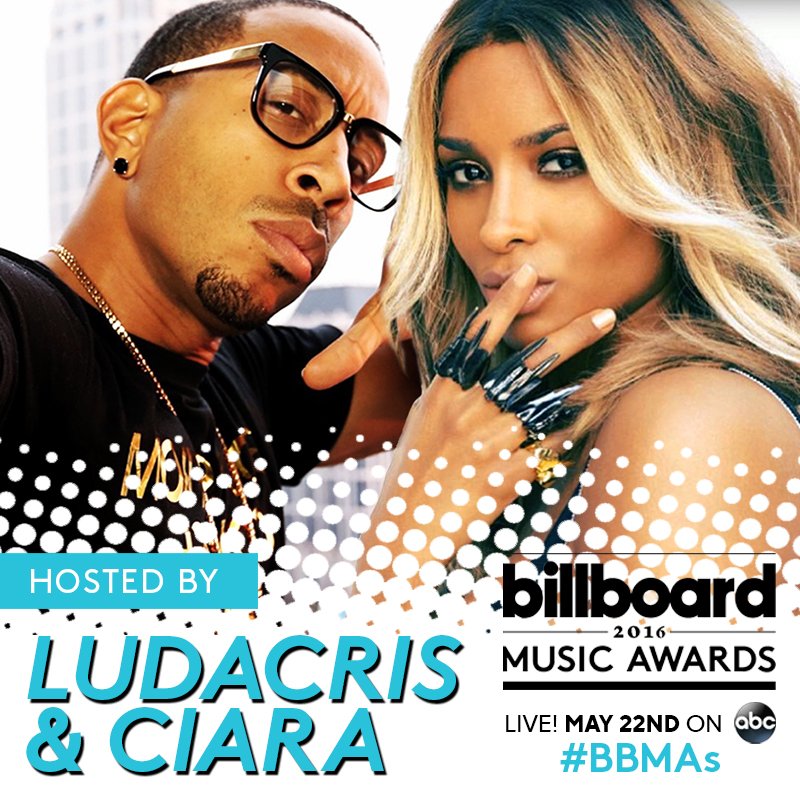 It’s a First:  A Norteño Artist & A Mexican Regional Artist Are Finalists

The Weeknd Leads This Year with Nods in 16 Categories,

Justin Bieber follows as a Finalist in 11 Categories,

Drake, Taylor Swift and The Weeknd

Ludacris & Ciara to Host the “2016 Billboard Music Awards” Live from

Wiz Khalifa and Charlie Puth follow the lead with six entries. They received five each for their hit single “See You Again” while Wiz Khalifa is also up for Top Rap Artist and Charlie is up for Top New Artist. The late David Bowie was honored post-mortem as a finalist for Top Rock Album for “Blackstar.”
2016 fun finalist facts include:

This year could prove to be historic, in that Taylor Swift could beat her own all-time record for the most BBMA wins (she has 20), while Justin Bieber and Adele are also vying to surpass Swift’s record. Swift is a finalist in eight categories this year, and thus could extend her own record, or can be caught or surpassed by Bieber (an 11 times finalist this year with 13 prior BBMA trophies) or Adele (a finalist in 8 categories this year and also with 13 all-time BBMAs to her name).

Billboard Music Awards finalists are based on key fan interactions with music, including album and digital songs sales, radio airplay, streaming, touring and social interactions on Facebook, Twitter, Instagram, YouTube, Spotify and other popular online destinations for music. These measurements are tracked year-round by Billboard and its data partners, including Nielsen Music and Next Big Sound. The awards are based on the reporting period of tracking dates March 23, 2015 through March 17, 2016 and Billboardchart dates April 11, 2015 through April 2, 2016.  Since 1940, the Billboard charts have been the go-to guide for ranking the popularity of songs and albums, and are the ultimate measure of a musician’s success.

For the latest Billboard Music Awards (BBMAs) news, exclusive content and more, be sure to follow the BBMAs on social and join the conversation by using the official hashtag for the show, #BBMAs.

Billboard is the world’s most influential music brand, built on the most complete and well- respected database of charts across all music genres. The Billboard charts define success in music. From the iconic Billboard magazine to Billboard.com, the ultimate consumer-facing destination for millions of passionate music fans, to the industry’s most elite conference series and influencer events including the Power 100 and Women in Music – the Billboard brand has unmatched authority among fans, artists and the industry alike. Billboard was named the leading U.S. brand on Twitter, surpassing the NFL, ESPN, BuzzFeed and MTV, with 7.5 million engaged actions in Q4 2015, and named an overall Top 10 U.S. Media Publisher in December 2015 with 11.8 million social actions. Billboard topped Shareablee’s list of U.S. publishers by engagement on Twitter in Q4, ahead of brands including Bleacher Report, BuzzFeed and The New York Times.Billboard magazine has scored major news-generating covers recently including Nicki Minaj, Lana Del Rey, Selena Gomez and Justin Bieber.

The “2016 Billboard Music Awards” are set to return to ABC and will be broadcast live from T-Mobile Arena in Las Vegas on Sunday, May 22 at 8:00pm ET/PT. The show will showcase this year’s hottest and biggest music stars.  Billboard Music Awards finalists are based on key fan interactions with music, including album and digital songs sales, radio airplay, streaming, touring and social engagement. These measurements are tracked year-round by Billboard and its data partners, including Nielsen Music and Next Big Sound. The awards are based on the reporting period of March 23, 2015 through March 17, 2016. The “2016 Billboard Music Awards” is produced by dick clark productions. Allen Shapiro, Mike Mahan, Mark Bracco, Barry Adelman and Robert Deaton are Executive Producers.