Sting To Be Honored With Award Of Merit at AMAs 2016

Sting To Be Honored With Award Of Merit at AMAs 2016 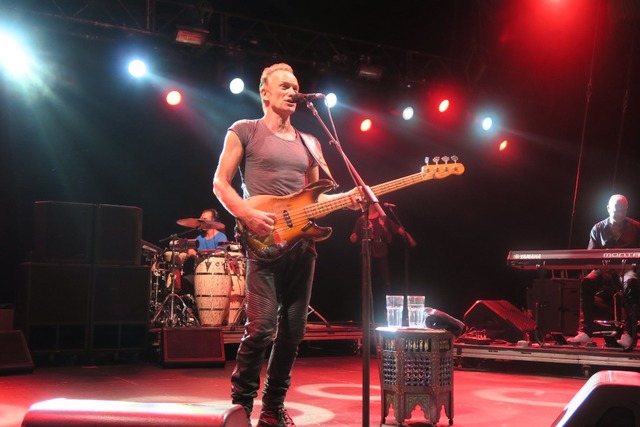 The “American Music Award of Merit” is only given to artists who have made truly exceptional contributions to the music industry. The award was last given in 2008 to Annie Lennox.  Previous honorees include Garth Brooks, Johnny Cash, Gloria Estefan, Whitney Houston, Janet Jackson, Michael Jackson, Billy Joel, Bon Jovi, Paul McCartney, Willie Nelson, Prince and Frank Sinatra.

Composer, singer, actor, author, and activist – Sting was born in Newcastle, England before moving to London in 1977 to form The Police with Stewart Copeland and Andy Summers. The band released five studio albums, earned six Grammy Awards and two Brits and was inducted into The Rock and Roll Hall of Fame in 2003.

Since 1989, Sting has released fourteen solo albums and received an additional 10 Grammy Awards, two Brits, a Golden Globe, an Emmy, three Oscar nominations, Billboard Magazine’s Century Award, and MusiCares 2004 Person of the Year. Also a member of the Songwriters Hall of Fame, he received the Kennedy CenterHonors in December of 2014. Throughout his enduring career, he has sold close to 100 million albums from his combined work with The Police and as a solo artist. In 2015, Sting received a Tony Award nomination for Best Original Score for his Broadway musical, The Last Ship.

On November 11, Sting will release 57th& 9th, his first rock/pop album in over a decade, which features the raucous, guitar-driven first single, “I Can’t Stop Thinking About You”. Produced by Martin Kierszenbaum, the album takes its title from the Manhattan street corner that Sting crossed each day as he walked to the studios in Hell’s Kitchen where the recordings were done.

Sting has appeared in more than 15 films and authored two books, including The New York Times best-selling memoir, Broken Music. His support for human rights organizations mirrors his art in its universal outreach. Along with wife TrudieStyler, Sting founded the Rainforest Fund in 1989 to protect both the world’s rainforests and the indigenous people living there.www.sting.com

The nominations for the “2016 American Music Awards” were announced earlier this month, revealing that Drake leads with 13 nominations, while Rihanna receivedseven and Adele andJustin Bieberreceivedfive nominations each.  Beyoncé and The Chainsmokers each receivedfour nominations.  Additionally, Bryson Tiller, Twenty One Pilots, Carrie Underwood, FettyWap and The Weeknd earned three nominations each.

The Artist of the Year nominees are Adele, Beyoncé, Justin Bieber, Drake, Selena Gomez, Ariana Grande, Rihanna, Twenty One Pilots, Carrie Underwood and The Weeknd.  The ten nominees will be narrowed to five based on the votes received through Monday, November 14 at 8:59:59am PT.  Voting for Artist of the Year will close on Thursday, November 17 at 8:59:59pm PT. The winner will be determined by the total votes received throughout the entire voting period.

At the American Music Awards, artists will be honored in multiple musical genres. Pop/Rock, Alternative Rock, Country, Rap/Hip-Hop, Soul/R&B, Adult Contemporary, Contemporary Inspirational, Latin, EDM and Soundtrack, are some of the genres alongside the awards forArtist of the Year, New Artist of the Year Un-leashed by T-Mobile and Collaboration of the Year.  This year, new categories include Tour of the Year and Video of the Year, while Favorite Song categories in the genres of Pop/Rock, Country, Rap/Hip-Hop and Soul/R&B have been added in lieu of the Song of the Year category.

For the latest American Music Awards news, exclusive content and more, be sure to follow the AMAs on social and join the conversation by using the official hashtag for the show, #AMAs.

Cheat tweet: .@OfficialSting will receive “The American Music Award of Merit” and perform at the 2016 @AMAs, 11/20 on ABC! amas.news/Sting #AMAs

Tickets are now on sale at www.axs.com | For a full list of nominees, please visit: http://www.theamas.com/nominees/2016-nominees/