As “Finding Dory” Swims Toward Opening Day on June 17, Fans Nationwide Invited to Speak Whale Like the Famous Forgetful Blue Tang Dory and Her Friends

As “Finding Dory” Swims Toward Opening Day on June 17, Fans Nationwide Invited to Speak Whale Like the Famous Forgetful Blue Tang Dory and Her Friends

The secret to speaking whale is making the words as long and ridiculous as possible.That’s how all whales talk, right?”

~Kaitlin Olson, voice of Destiny, who speaks whale and offers guidance in this Speak Like a Whale Featurette.

Ever since the friendly, but forgetful blue tang Dory insisted she could speak whale, moviegoers have wondered: Can she really speak whale? How did she learn? Can I do it, too? Fans nationwide are invited to celebrate Dory’s unforgettable spirit and her can-do attitude with Speak Like a Whale Day on Saturday, June 11, 2016.

“When ‘Finding Dory’ was just starting to come together, we realized we didn’t know much about this blue tang with the sunny personality,” said director Andrew Stanton. “Dory’s past became the subject of great curiosity—both for us as storytellers and for everyone who’d fallen in love with her.

Opening in theaters nationwide on June 17, “Finding Dory” features a fun and talented voice cast, including Ellen DeGeneres as Dory, Albert Brooks as Marlin, Ed O’Neill as “septopus” Hank, Kaitlin Olson as whale shark Destiny and Ty Burrell as beluga whale Bailey. Olson, who can be heard speaking whale in the movie, teamed up with Burrell to share a few tricks in a Speak Like a Whale Featurette.

Fans are encouraged to take part in Speak Like a Whale Day by speaking whale wherever they go, uploading videos of themselves and tagging #SpeakLikeAWhaleDay.

The efforts will be supported across Disney channels, including ABC, which broadcasts “Finding Nemo” tonight at 8 p.m. ET & PT/7 p.m. CT & MT, with a special look at “Finding Dory,” as well as ESPN, Disney Channel, Radio Disney and Freeform. Social media will showcase the event via Facebook, Snapchat and Twitter (#SpeakLikeAWhaleDay, #FindingDory). 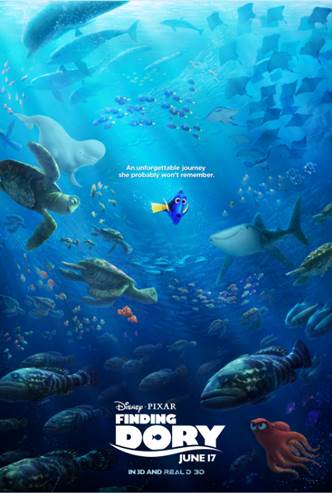 Disney•Pixar’s “Finding Dory” welcomes back to the big screen everyone’s favorite forgetful blue tang Dory (voice of Ellen DeGeneres), who’s living happily in the reef with Nemo (voice of Hayden Rolence) and Marlin (voice of Albert Brooks). When Dory suddenly remembers that she has a family out there who may be looking for her, the trio takes off on a life-changing adventure across the ocean to California’s prestigious Marine Life Institute, a rehabilitation center and aquarium. In an effort to find her mom (voice of Diane Keaton) and dad (voice of Eugene Levy), Dory enlists the help of three of the MLI’s most intriguing residents: Hank (voice of Ed O’Neill), a cantankerous octopus who frequently gives employees the slip; Bailey (voice of Ty Burrell), a beluga whale who is convinced his biological sonar skills are on the fritz; and Destiny (voice of Kaitlin Olson), a nearsighted whale shark. Deftly navigating the complex innerworkings of the MLI, Dory and her friends discover the magic within their flaws, friendships and family. Directed by Andrew Stanton (“Finding Nemo,” “WALL•E”), co-directed by Angus MacLane (“Toy Story OF TERROR!”), and produced by Lindsey Collins (co-producer “WALL•E”), “Finding Dory” swims into theaters June 17, 2016. For more information, like us on Facebook, https://www.facebook.com/PixarFindingDory, and follow us on Twitter, https://twitter.com/findingdory and Instagram, https://www.instagram.com/pixarfindingdory/.