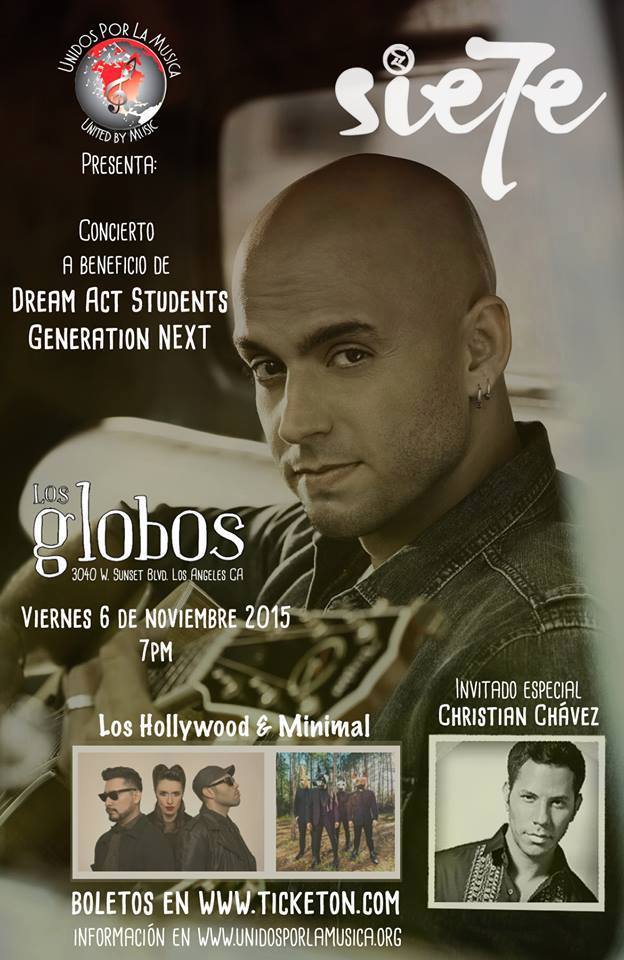 Unidos Por La Música announced their second annual fundraiser event to benefit the Dream Act Students by presenting a concert with major international artists SIE7E and CHRISTIAN CHAVEZ, an ex-member of celebrated groupRBD as guest artist. More artists are to be announced as part of this great event that will be held in Los Angeles on November 6 at Los Globos.

This is the second year that Unidos Por La Música, a nonprofit organization that began its work in 2011, curates the event with “the objective of being able to continue to support students in the community to achieve their dreams through education” said Oscar Ayon, President and Executive Director of the nonprofit organization. “This organization has the primary mission of promoting economic self-reliance and upward mobility for residents in low-income communities through education and the power of music, the same power that transcends borders and unites people.”

That is how Unidos Por La Música came to present both international and rising artists for the second consecutive year, by having them join in the mission through participation in this great event. “We chose to invite SIE7E, as the headliner of our event because he is a living example of perseverance dealing with his dreams and goals,” said Ayon, referring to the Puerto Rican artist-author of several hits and winner of a Latin Grammy award in 2012 for Best New Artist. “SIE7E has a great story to tell our youth of how he too confronted many obstacles, yet managed to break barriers that led him to achieve his dreams and became the great artist we know today.”

CHRISTIAN CHAVEZ, is the special guest artist of the night who has continued and moved his career forward as both an actor and soloist. He achieved this after the resounding success of the group RBD, who was nominated twice for a Latin Grammy, who achieved multiple platinum records for their sales and who received over 40 international music awards. Chavez has released two solo albums, including his hit “Libertad” which succeeded in placing itself within the primary themes of radio talk (logro colocarse entre los primeros temas radiales) and its controversial video that exceeded one million views within the first days of its launch. The Mexican super star comments: “I think everyone should have the opportunity to improve themselves and improve the situation we live in as human beings. America has always been a country that has been represented as a flag of freedom in the world. Let’s not let new doctors, political scientists, teachers, biologists without the country’s opportunity of providing them with the tools because of being undocumented.”

More artists are to be announced as part of the event that will benefit at least four students in Southern California with grants to commence their higher education. Tickets are now available at $40 for 18 and over and $35 for 21 and over at www.ticketon.com/Sie7e, doors open at 7 PM.

For those interested in becoming donors, can read more information on how to participate at www.unidosporlamusica.org.