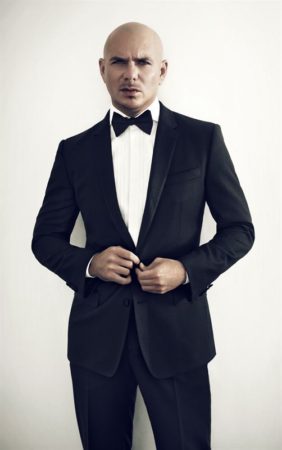 Telemundo will honor Pitbull with the first ever “Latin AMA Dick Clark Achievement Award” at the upcoming third annual “Latin American Music Awards” (Latin AMAs). The international singer will also be joined on stage by pop group Fifth Harmony for the worldwide television premiere of the song “Por Favor.” Produced by Telemundo and Somos Productions, the awards ceremony will broadcast live from the Dolby Theatre in Hollywood, CA, at 9pm/8c on Thursday, October 26, 2017, and will be preceded by the red-carpet pre-show “La Alfombra de Latin AMAs” at 8pm/7c.

The “Latin AMA Dick Clark Achievement Award” recognizes a Latin artist that inspires all of humanity with his dedication to music and because he uses his fame and influence to help those in need. This artist does not hide in a recording studio, but gives brightness and hope to those that have no other alternative. Dick Clark was one of the great pioneers of the music industry in the United States of America and he declared, “I have accomplished my childhood dream, to be in show business. Everybody should be so lucky to have their dreams come true. I’ve been truly blessed.” The Dick Clark Achievement Award is the distinction given to an artist who has permitted others to make their dream a reality.

From Mr. 305 to Mr. Worldwide, Armando Christian Perez, aka Pitbull, rose from the streets of Miami to exemplify the American Dream and achieve international success. His relentless work ethic transformed him into a Grammy®-winning global superstar and business entrepreneur. His music has appeared in “Men in Black III” and “The Penguins of Madagascar,” and he even had a starring voiceover role in the animated 3D movie “Epic.” Last year, he returned to the AXIS at Planet Hollywood Resort & Casino for a second run of his “Time of Our Lives” residency.

His sold-out world concert tours have taken him from the U.S. through North and South America, Europe and the Far East. He has also completed headlining tours in China and Japan. Currently on his second co-headlining U.S. tour with Enrique Iglesias, Pitbull released his tenth full-length album, “Climate Change” this past March. Landing #1 hits in over 15 countries, 10 billion views on YouTube/VEVO, 70 million single sales and six million album sales, Pitbull does not stop. His social networking channels include 57 million likes on Facebook, 24 million followers on Twitter and six million followers on Instagram, plus more than nine million subscribers on YouTube.

Initially inspired to pursue his music dream by one of his high school teachers, Pitbull also understands the impact that education can make in one’s life. To spread that message and encourage quality education for children from all walks of life, he serves as an ambassador for SLAM!, Sports Leadership and Management charter schools. Launched in the Little Havana section of Miami where he spent some of his youth, the SLAM! model has now expanded to Las Vegas and West Palm Beach, Florida.

The “Latin AMAs” honors artists in the genres of Pop/Rock, Regional Mexican, Urban, and Tropical, as well as categories for Favorite Crossover Artist, Favorite Collaboration, New Artist of the Year, Artist of the Year and Album of the Year, among others. The “Latin AMAs” nominees are based on key fan interactions with music, including (but not limited to) sales, airplay, streaming and social activity tracked by Billboard through its data partners Nielsen Music and Next Big Sound.

Fans from the United States and Puerto Rico have until October 17 to place their vote online for their favorite artists at www.LatinAMAs.com/vota, and fans worldwide can vote via Twitter by posting a tweet that contains first and last name of the nominee, category and the hashtag #LatinAMAs.