Born in Mexico City. Aida Landeros began her dance studies at the age 15. She was trained in ballet and modern dance at the Ollin Yoliztli Cultural Center.

Aida came to Los Angeles in 1995 to study English and to pursue her career as a dancer. Landeros, started her training as a belly dancer with world known performers and choreographers; Tonya, Ansuya and Tahiya. As a solo artist, Aida performed at different restaurants, parties, and other venues, such as; The Calavera Fashion Show in Echo Park, The Kaledoiscope World Dance at USC and was featured on the Documentary Venice Drum Circle.

In 2002, while enrolled at the Santa Monica City College Dance Program. Aida discovered her passion for Aztec Dance. “I fell in love with the dance right way.” Landeros, joined the Aztec Dance Group Huitzilopochtli under the direction of Sergio Reyna. Her seven year journey with the group gave her experience and helped her shape the vision for the creation of her own movement. 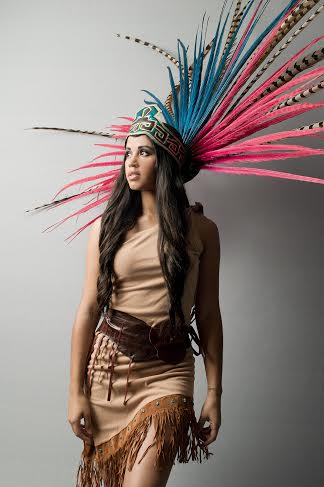 Ollin Ixtli means Face Movement in Nahuatl. It is an anology to our inner face/spirit. Ollin was born in 2011. “My goal was to create a group of strong dancers who could bring the spirit of Aztec Dance in a elegant, beautiful and modern way.” Landeros, has also created an alternative exercise program for the people interested in learning about the discipline and military training of the Aztecs. Aztec Fitness is an exercise program inspired by this ancient dance combined with other dance forms and choreography.

Ollin and AF have appeared on Channel 34 News and Despierta America on Univision, Channel 52 on Telemundo and the TV show The Coffee Break on Azteca America. Articles of their movement have been featured on Jacamo Magazine, MSN and internet blogs. Live performances at the Los Angeles Mexican Consulate, Cinco de Mayo events at MOLAA (Museum of Latin American Art) and at the Mexican Consulate in San José, CA, The 5th Latin American Festival in Long Beach and at various health fairs in California.

For more info or to acquire their 2015 calendar “Melancholia” go to: