Cardenas Marketing Network, Inc. (CMN), the largest Latin music promoter in the nation, has partnered once again to produce one of the most anticipated tours of the year featuring the legendary singer-songwriter, Juan Gabriel. The Mexican icon welcomes you along to join him in his multi city journey to Noa Noa, a tour that is scheduled to kick off in Los Angeles on Friday, September 11, 2015. It’s tour concept features a brand new fun & flirty production that will take you through Juan Gabriel’s 45 year-artistic career, combining more than 50 talented musical acts including mariachi, orchestra, dancers, and backup singers together in a way that is sure to get you up out of your seat! Tickets will go on sale to general public on June 19, 2015. CMN fans will have access to pre-sale tickets beginning June 18, 2015 by obtaining an exclusive code. Visit www.cmnevents.com for complete information.

Juan Gabriel initiated the first leg of his “Volver Tour” in 2014 and successfully completed the second leg of the tour in February of this year. This most recent tour consisted of 19/22 sold out shows and had over 184,248 overall attendees in the U.S. alone. Not to mention that Juan Gabriel also managed to do the impossible and break record at the prestigious Auditorio Nacional in Mexico City by performing for an impressive 5 consecutive hours. With that same energy, Juan Gabriel’s “Bienvenidos al Noa Noa Tour” will reach new cities including Sacramento, CA; Kansas City, MO; Tucson, AZ and Seattle-Tacoma, WA.

Juan Gabriel is considered one of the most successful singer-songwriters of all time and the leader in sales with over 100 million albums sold. His music expands throughout numerous music genres that range from pop, rock, boleros and traditional Mexican. In addition, he remains as one of the most popular artists throughout Latin America. 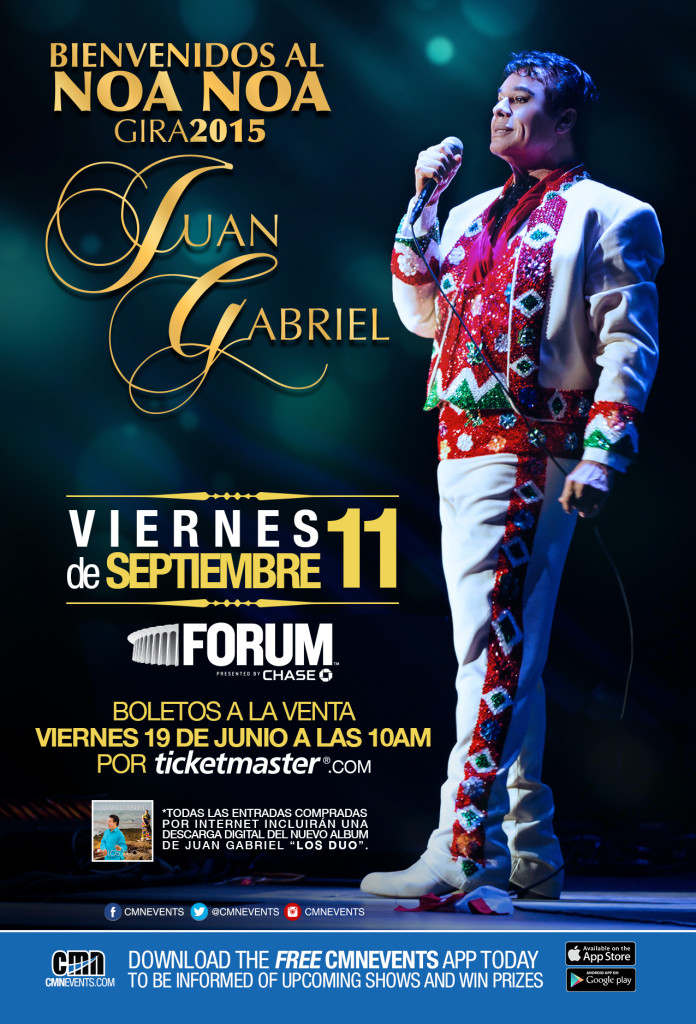