‘All six’ members of Multi-Platinum Pop and R&B trailblazers New Edition will be back onstage together with hotly-anticipated ALL SIX Summer 2014 tour with dates throughout the U.S. 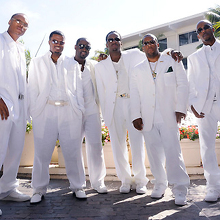 The ‘Original Boy Band’ is back and better than ever with the hotly-anticipated ALL SIX TOUR this Summer 2014. Multi-platinum Pop/R&B icons New Edition will be playing a series of U.S. shows in major cities across the country beginning June 26, 2014 and scheduled through the beginning of August 2014. All six members- Ronnie DeVoe, Bobby Brown, Ricky Bell, Michael Bivins, Ralph Tresvant, and Johnny Gill- will take the stage together bringing audiences around the country the hits that have made them one of the most legendary groups in music history.

One of the most successful touring groups ever, New Edition has wowed millions of fans around the world for over 30 years with their smooth harmonies, signature choreography, and unstoppable stage presence. The group has 18 multiplatinum albums, 4 American Music Awards, and 14 number one hits (in addition to countless Billboard Top 20 hits). Most recently New Edition was honored with the 2012 Soul Train Lifetime achievement award.

The group originally formed in 1978 and broke into the music scene in the 1980’s. They are known for the hit songs “Candy Girl”, “Mr. Telephone Man” and “Cool It Now.” Between the highly successful solo careers of members Bobby Brown, Ralph Trevsant, and Johnny Gill- along with the phenomenal success of New Edition offshoot, Bell-Biv-DeVoe (best known for their 4-times platinum crossover hit, “Poison”), New Edition was more than a band– they were a movement, racking up over 30 million records sold. New Edition launched a triumphant reunion in 1996 bringing all members back together to the stage.

With their record-shattering catalogue of hits, New Edition remains one of the most influential touring groups of all time, having pioneered the Boy Band craze and created a classic sound and style that has changed the landscape of popular music. And they continue to create new music- when the group is not onstage, they’re in the studio, working on their first new album in 10 years, which will be released late 2014.

New Edition is bringing the heat this summer with performances in cities including their hometown, Boston, New York City, Philadelphia, Nashville, Atlanta, Dallas, Detroit, Louisville, Washington D.C., Phoenix, Las Vegas, Los Angeles and many others, giving fans from all corners of the country the chance to see them live. For a full list of continually updated tour cities and dates- and for all things New Edition- head to www.OfficialNewEdition.com

Exclusive Meet and Greet and VIP packages are also available.