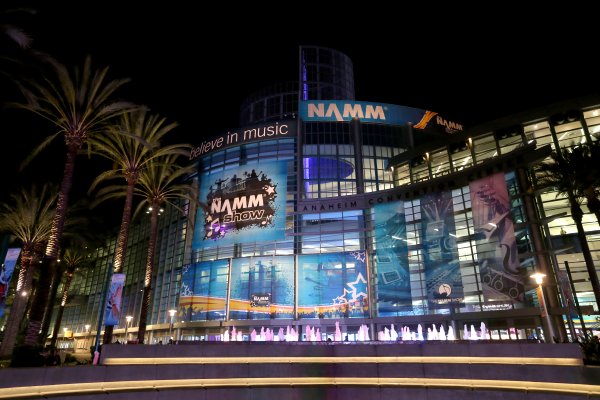 ANAHEIM, CA – JANUARY 20: The Anaheim Conevntion Center is seen with NAMM signage at the 2016 NAMM Show and First Look at the Anaheim Convention Center on January 20, 2016 in Anaheim, California. (Photo by Jesse Grant/Getty Images for NAMM)

The largest NAMM ever opened today in the Anaheim Convention Center, across the street from Disneyland,  and was as a packed as a Star Wars sneak preview at midnight.  A NAMM staffer told me that he stopped counting the number of attendees at 90,000 – and that didn’t include media, security and many, many chocolate chip cookies. As usual, the convention center and surrounding hotels were awash with artists, producers, technicians and executives  who were ready to play, party and market.

It is no wonder that NAMM 2016 is the largest ever – the music industry is a growing again.  Recorded music  sales jumped to $17 billion in 2015, up from $15 billion in 2014.  This is good news for an industry that reached 27.3 billion in 1999. Although most of that increase came from digital sales and streaming, the thousands of companies that provide musicians the tools to write, record, play and sell music competed to be at NAMM, which ran out of floor space for industry booths. 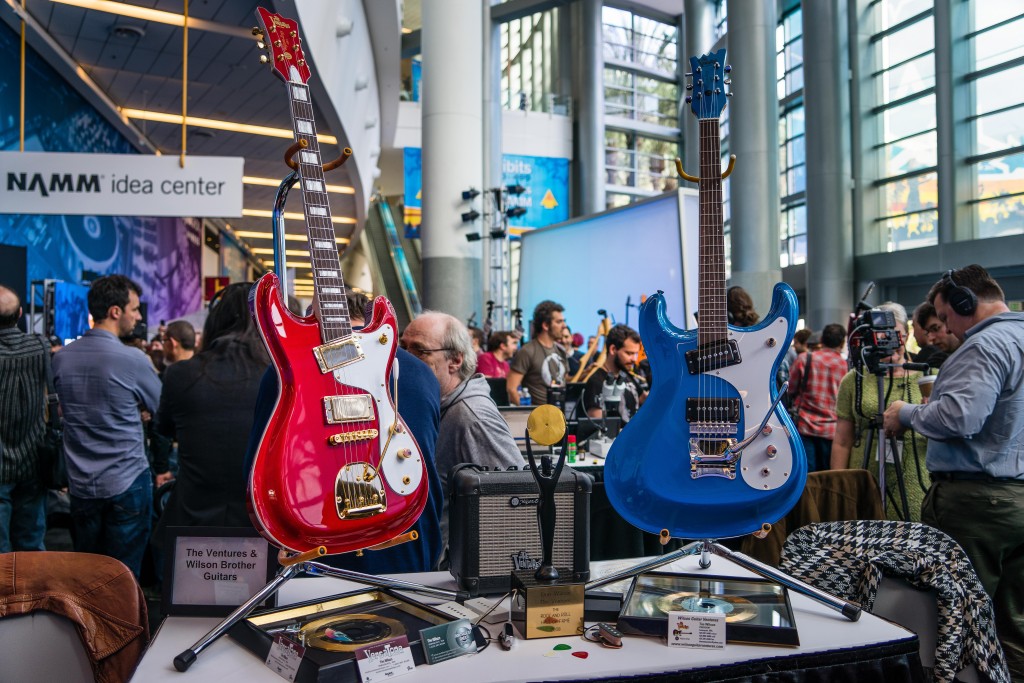 While the highlight of the day was the Music Life Award given to Graham Nash at the NAMM Breakfast of Champions and his concert in the evening at the Nissan Stage, a walk through the miles of aisles of NAMM 2016 offered a glimpse of where the creative side of music is heading. Technologies abounded, even more than usual. From ever more sophisticated and compact lighting and sound systems, to guitar accessories and larger pedal  boxes to hold them and power supplies to run them and instruments that made sound from touch and movement, the engineering side of live music was definitely cutting edge. But just plain – and many fancy – instruments also held sway.  Joining the queens of guitar making – Fender and Gibson, were many fine guitar makers, each with display walls of different models and  expert players to demonstrate them or enjoy the hands-on testing that often became jams.  Same with drums, brass, violins, pianos and keyboards.

Attendees were also able to get their hands on instruments from around the world, as international manufacturers dominated parts of NAMM Show, especially China, Argentina and Germany.   A lush room of Latin drums with a wall of cajons throbbed all day as percussion artists sampled the gear.  A quiet room with thick carpets, a Champaign bar  and white leather couches displayed grand, baby grand and upright pianos as well as keyboards from Japan, China Europe and the US drew both pop and classical players. 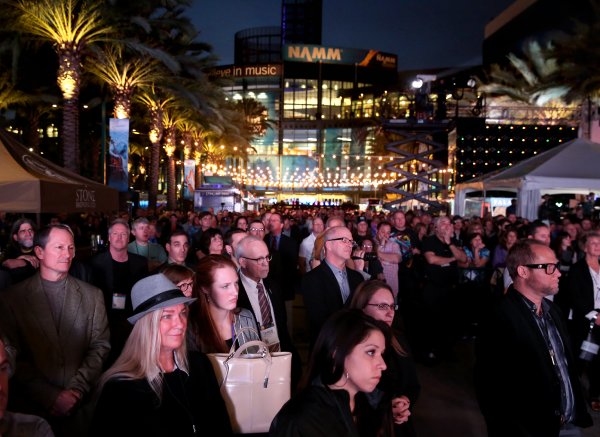 The hundreds of business workshops and presentations on market music touched in one way or another on the shifts taking place in the music industry, primarily from physical and downloads to streaming and the pressure this puts on artists and how that will move up the line to impact instrument makers, and other music product and service companies.  New business models popped up in the discussions- touring, scoring ads and film and TV, YouTube ads next to music videos, online concert fees.  One company, AlertTheGlobe.com, chose NAMM 2016 to launch a new global music/video business model designed with advice from  a number of advisors, including Waddy Wachtel of Stevie Nicks, Bunny Brunel of Herbie Hancock and rock photographer Rob Shanaham. Wachtel, Brunel and Shanaham were on hand for the launch press conference and reception.

Tomorrow promises to be even more packed  and exciting with a TEC Tracks Session on “Building a Band in the Digital Age: Audio Rhythm Project” featuring Police drummer and founder Stewart Copeland and Public Enemy bassist Brian Hardgroove, the She Rocks Awards, and the 2016 Imagine Party  for the John Lennon Educational Tour Bus Featuring Dr. John & The Nite Trippers.