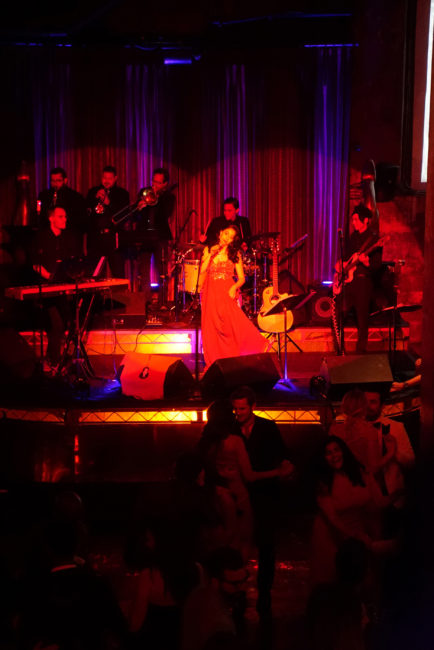 The Edison is one of LA’s more upscale and quirky music venues.  Designed by DTLA urban renewal developer  Andrew Meieran and run by the entertainment entrepreneur Barbara Jacobs, it is situated inside LA’s first privately-owned power plant, underground in the sub-basement of the Higgins Building, constructed in 1910. It retains parts of the generators and other mechanical marvels of the time in a completely refurbished two and half story shimmering cavern lined with copper and brass, with crystal chandeliers, movie screens running silent films, side rooms flanked by windows into power tunnels running beneath city, and quiet coves with Champaign fountains.

There is no The Edison sign;  its unremarkable entry is in an alley, marked only by a black clad (and very friendly) doorman in a chair. Once inside, guests descend the stairs into a glittering environment reminiscent of the Coconut Grove.  And those guests must stick to the dress code – no cutoffs, shorts,  t-shirts or track shoes. Men must be in dress shoes and collared shirts; women are always glamourous.

In was in this romantic environment on Valentine’s night that I was fortunate enough to see Nancy Sanchez in her red satin-gowned bejeweled jazz persona, bringing back the glamour of the 40’s for swaying millennials in top hats, long gowns and patent leather shoes celebrating (or starting) their romances.

I have known Sanchez for  almost two years, but always as a Latina pop and traditional musica singer and Mariachi band leader.  I came late to the party;  the focus of her career has always been exactly what she did on Valentine’s night — mesmerizing people with a lush, sexy voice, melodious period songs and a seductively gorgeous stage presence.  She was – and is — jazz through and through, the winner of  three Orange County Music Awards for Latin and Jazz. 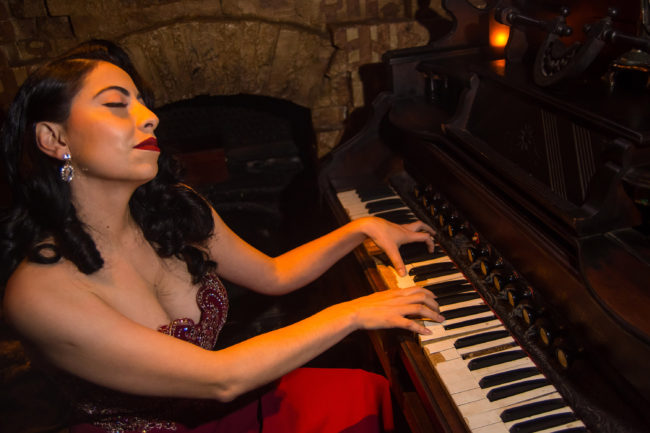 It was clear why jazz awards have piled up on her shelves.  Backed by a full band – guitar, keyboard, horns, drums, standup bass, she sang standards with polish and soul.  Serenading us with songs like  “Dream a Little Dream of Me”  and “Besome Mucho”, Sanchez kept the room swaying, finger snapping, and in some corners and on some couches, making out.

Sanchez gave us a remarkable three 45-minutes sets, keeping her voice clear and smooth and her energy up from first to last song.  In the second set, Sanchez did what only she can do — morphed into a Latina pop singer while staying with the jazz club atmosphere.  Ascending the stage in her flaming red and gold leather Mariachi outfit (sans sombrero) she belted out songs from her new,  predominantly Spanish album America Novio (American boyfriend), recounting the  challenges of making the cultural shift of a little girl brought to Estado Unitos from her home in Toluca, Mexico, and immersing herself in jazz and its culture while also being immersed in the culture of Mexico at home.

Her shift in style, costume, language and culture was smooth and effortless in the second set.  Many of those in the room were Spanish speakers (common in LA) and those who were not easily flowed with the rhythms and instinctively understood the lyrics. When she pulled out her guitar, shifted the style from jazz to rock, and launched into the title song, “American Novio”,  the room moved like one of the generators had shot a lightning bolt at the dance floor. It was time to dance!

For the third set, Sanchez poured herself back into the red satin gown with the bejeweled top for the final set, returning The Edison to its 1940’s musical simulation of a tunnel of love. Starting off with swing tunes, she smoothly slid into slow dance melodies, and ended the evening with love songs.  If you paid close attention  to her on stage during the instrumental solos you could see her smiling appreciatively at the embracing couples revolving on the dance floor in front of her. Making musical magic on Valentine’s day was obviously as much fun for her as was for us.