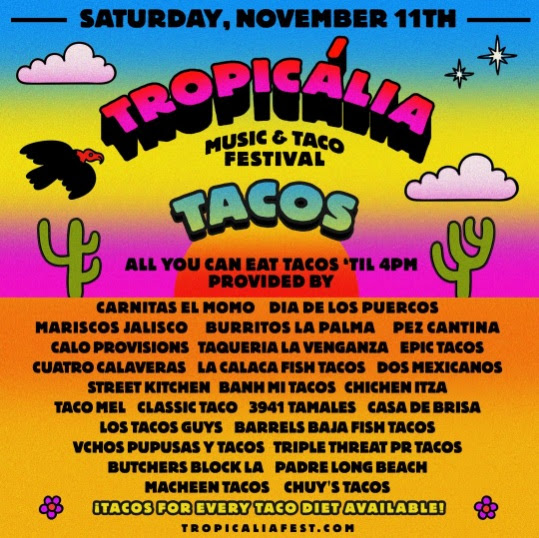 There is already a buzz amongst L.A.’s ultra-hip alt-Latino, electronica, lo-fi, Regional Mexican, 90’s hip hop, 70’s soul and 50’s rockabilly music lovers. They are all talking about Tropicália Music and Taco Festival, one of the most anticipated musical festivals of the year. Once again The Observatory Group breathes new life into the stale festival landscape with yet another historically eclectic line-up certain to resonate with fans of any given genre. And yes the rumors are true; all you can eat tacos until 4 p.m.Free tacos and a lineup like none we’ve ever seen, Saturday, November 11 at Queen Mary Park in Long Beach; Tropicália Music and Taco Festival!

The often mentioned eclectic line-up ensures that there is an artist or group representing any given dance genre. Tropicália keeps the crowd moving by mixing soul music legends Brenton Wood and The Delfonics with the queen of rockabilly Wanda Jackson, plus reggaeton royalty her highness Ivy Queen and
Jhené Aiko R&B songstress.

As if this wasn’t enough Tropicália welcomes the late addition of iconic Mexican band Café Tacvba whose musical mix of punk, electronica, folk, cumbia and just about every other Latin rhythm will add to this highly anticipated event. This event will be hosted by East LA native Felipe Esparza best known for his raw, real-life comedy, his irreverent on-stage persona, wild hair, and his often-imitated phrase, “What’ sup fool?”

Tropicália Music & Taco Festival takes place November 11, 2017 at Queen Mary Park in Long Beach, CA with general admission tickets starting at $75 ranging to $95 as the festival date draws nearer. VIP admission starts at $150, with packages like “Rage on the Stage” selling for $500. Those who want the ultimate VIP treatment can opt for “VIP Legend” and “VIP Cabana” packages.

View the entire line up and purchase tickets at: http://www.tropicaliafest.com/