We got into the driver’s seat, fastened our seat-belts and geared up for a fun, action-packed ride on Creech (Monster Truck) at Paramount Studios along with Jim Schwalm (Special Effects Coordinator) and Tucker Albrizzi (“Sam Geldon”).

During the home release of MONSTER TRUCKS Tucker talked about his wonderful experience working on this film, sharing with the amazing professionals, cast and crew and be able to grow as a young actor in Hollywood. Tucker also shared some fun facts and gave us a bit of insight as to what is next for him.

We were able to get into the driver seat and ride with Special Effects Coordinator, Jim Schwalm. An impressive resume that continues to evolve with every movie. Jim takes us behind the detailed process of creating the special effects, building a total of seven (7) remote control monster trucks from the ground up and a lot more. 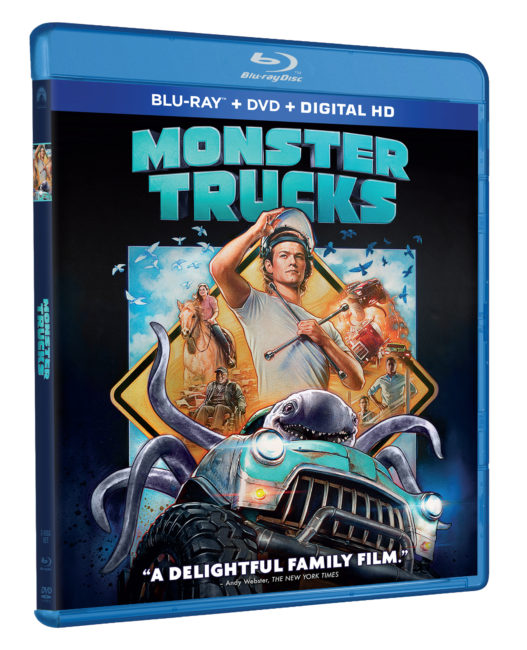 The MONSTER TRUCKS Blu-ray Combo Pack features over 40 minutes of action-packed behind-the-scenes bonus content.  Take a look under the hood and discover the magic behind MONSTER TRUCKS with interviews from cast and crew, deleted scenes, a hilarious gag reel and much, much more!  Plus, the Blu-ray Combo Pack includes collectible MONSTERTRUCKS wall decals, for a limited time while supplies last.  The film also boasts a Dolby Atmos® soundtrack* remixed specifically for the home theater environment to place and move audio anywhere in the room, including overhead.

The Blu-ray Combo Pack available for purchase includes a Digital HD copy of the film that can be accessed through UltraViolet™, a way to collect, access and enjoy movies.  With UltraViolet, consumers can add movies to their digital collection in the cloud, and then stream or download them—reliably and securely—to a variety of devices.