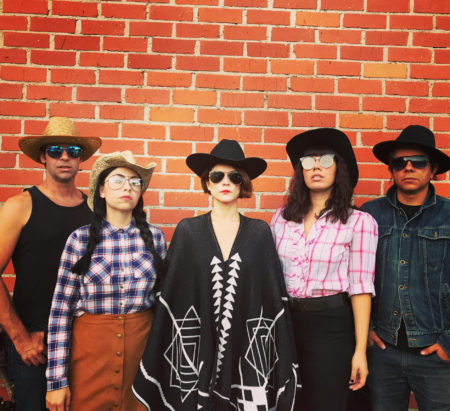 Bilingual Alternative L.A. based band  The Mexican Standoff released their latest video, “Muro,” a critique to Trump’s proposed huge wall, that narrates one of eight hundred thousand dreamer’s stories. The music video for “Muro” contrasts the serious subject matter with some humor and a hint of parody.

The video was exclusively premiered on KCRW’S Pan Caliente.
http://blogs.kcrw.com/music/2018/02/pan-caliente-video-premiere-mexican-standoff-muro/

What The band says about “Muro”
“Muro” is the narrative of one of eight hundred thousand stories.  Today’s president is making a lot of noise about building a border wall when there are around 344 miles of wall built already. Politics are out of control, and as musicians and storytellers, we want to bring some humor and music to today’s issues. We hope to bring people together in these days where America is divided. We support dreamers. We support immigration. We support equality

About The Mexican Standoff
The Mexican Standoff is a socially conscious band with a comedic twist comprised of producers, performers and songwriters of the LA Latin Alternative scene. Creators of the viral video “El Corrido de Benjamin Ramirez” aka “El Elotero,” they play folk music from the border, sing in both English and Spanish and show people a good time in these tough times. The members of the Mexican Standoff are accomplished musicians in their own right. Among their shows in 2017, headlining the opening night of Spaceland in the Levitt Pavillion Summer Series, and Echo Park Rising.

I was good in school, I never missed a day
Played a lot of sports, got a lot of A’s
Wanted to be a doctor someday
They say I can’t cause I’m illegal

I get up at six, I head off to school
and then go to work, and do it again
wanted to be a doctor someday
They say I can’t ‘cause I’m a dreamer