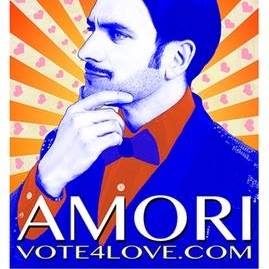 Do LaB™ Officially Endorses Paul E. Amori in his bid for City Mayor

Today, Lightning In a Bottle Arts and Music Festival, a creative mecca for creative artists and performers by Do LaB™, announced the official endorsement of improvisational dynamo and Founder of Amori’s Casino & Burlesque, Paul E. Amori, for Mayor of Los Angeles. For the first time ever, an interactive artist steeped in music festival culture is applying the ideas and solutions from the festival community directly into a real-life play for public office. In the current Vote 4 Love campaign, Amori distinguishes himself from other candidates of the day by running on what he calls “the Love Party” platform, which asks voters a simple question: “How do we create the most love for the most people?”

In an election held at the festival in 2012, Amori won the honorary title of Mayor of Lightning in a Bottle with his trademark Vote 4 Love campaigning. The following year he independently launched a crowd-funding campaign to bring a vision of his own Casino & Burlesque to the festival. In a landslide turnout of small contributions, his enthusiastic supporters donated more than fifteen thousand dollars to build a home for Love at LIB. Amori’s Casino & Burlesque has since been a staple of the festival and a beacon to others who dare to dream of the possibilities of a world with a little more love in it.

Of the Vote 4 Love campaign, Lightning In a Bottle Co-Founder Josh Flemming said, “We are humbled and excited to see one of our own out there being a voice for good. In the dynamic and all too often disheartening landscape of American politics, it’s refreshing to see someone from the local community of artists leading the charge to bring hope to areas and people that need it most. For this reason, we’re proud to support Paul E. Amori for Mayor of Los Angeles in 2017.“

To define the Love Party, Paul E. Amori summarizes the key points of his platform as:

To become involved with the campaign or to get more information about Paul E. Amori and the Love Party, visit Vote4Love.com and learn all about how to “Love Your Vote” on March 7th, 2017.