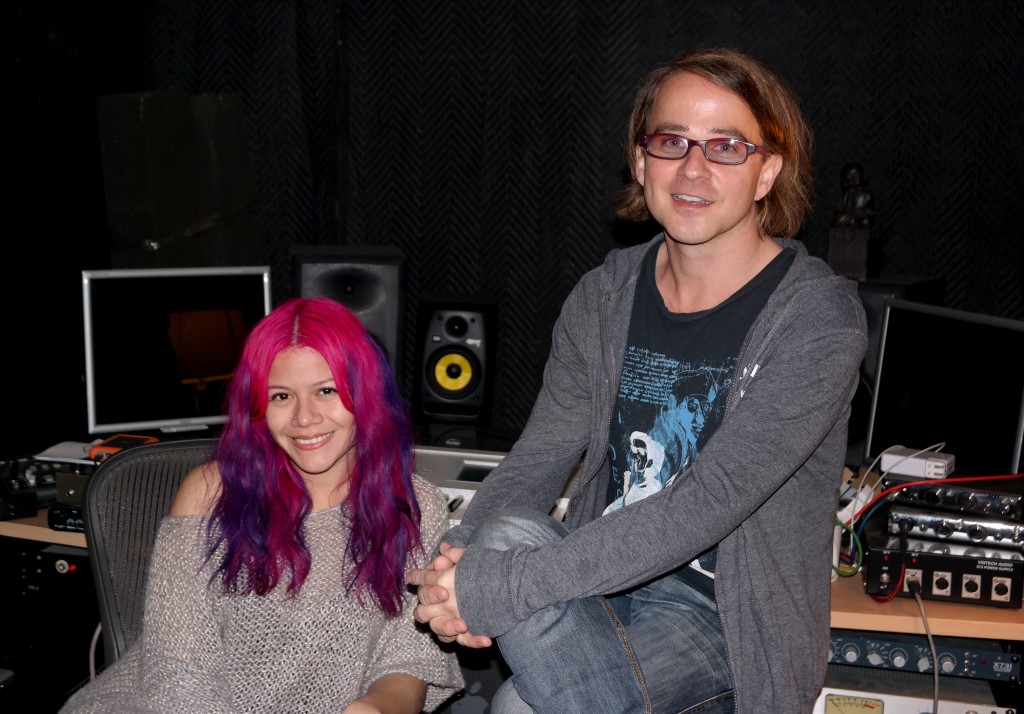 “The system is broken, that’s why we are doing this.  We have to put the power back in the hands of the fans and the artists,”  says Matthew Hager, double platinum music producer and bass player in Allison Iraheta’s explosive alt rock band, Halo Circus.  He is sitting on one end of a blanket-strewn brocade couch in Halo Circus’ recording studio;  front woman Iraheta is perched on the other end, nodding and interjecting her thoughts.

The “system” is the system for booking bands into small and medium sized venues. Halo Circus, which recently packed Hollywood’s venerable Troubadour in its Say It Loud concert has decided to use the new crowd-sourcing platform RoadNation.com to book its summer tour – unheard of for a band as popular as Halo Circus.  Monday, www.roadnation.com went live at to fans nationwide with Halo Circus’s tour announcement.  Over the next two months nine other bands, including LA’s experimental punk funk band Project N’Fidelikah and  New York’s dream pop songstress, Jennie Vee,  will post pages on the site for fans to crowdsource gigs.

The RoadNation model is simple: a crowd-sourcing infrastructure for small and medium-sized bands to set up tours and heighten everyone’s experience, especially for smaller bands.  The process is pretty simple: a band designates where they want to tour, a target number of tour stops and a funding goal for each tour stop. Fans determine tour stops by contributing to the city of their choice in the region set by the artist. The city is confirmed on the tour when the funding goal is reached.

“This is ideal for Halo Circus,” says Hager with vigorous nods from Iraheta.  “You have to see us live to fully understand us,” he adds,  “We have something special and we want to go directly to fans with it.  Hager emphasis the point: “RoadNation will allow Halo Circus to connect directly with fans – that’s why we are willing to take the risk with a new, untried idea because it fits so well with us and because it puts the power where it belongs, in the hands of the fans and the artists.”

They are absolutely right about the state of tour booking.  It is getting tougher and tougher for bands and venues of a thousand or less to connect and both make a living outside of stadium shows controlled by a national ticketing agency. Which is why Halo Circus decided to accept Road Nation’s invitation to take a risk by launching their first national headline tour this week with an untried  startup crowd-sourcing company.  If successful, the launch will introduce a new business model into the broken music tour environment and put power back in the hands of fans and artists. Through RoadNation.com’s apps, bands and fans together will determine where they will play and how much concerts will cost

The relationship between bands and fans actually starts as soon a fan logs on to a band’s site, which provides updates about the campaign, interactions with the artists and apps to share the campaign with friends to get additional support for their city.  Contributions to an artist’s campaign can also provide access to exclusive content and tour merchandise as well as the opportunity to  join in unique experiences with the artist while they are on tour.  The venues can be a favorite club, a high school auditorium, even a fan’s house or backyard.

The funds to the band are guaranteed.  The relationship that begins when fans open a band’s page on the RoadNation site deepens when they decide where they want a band and then put in their credit card.  From there, it grows to setting up dinners, finding the band places to stay, getting songs from the band not available anywhere else.   The RoadNation relationship can’t be duplicated on a computer and given away for free like downloads or streams.

The site’s founders pre-tested the concept with Southrail, an Americana band unknown outside of  its local Maryland base.  The band used a beta version of RoadNation.com to book venues on a regional tour and it worked.  They met new fans and played their hearts out to small, very appreciative audiences.  They also made a profit,  which was not one of their objectives but very welcome.  RoadNation has decided to run a larger experiment,  fielding 10 bands over a two month beta period. Halo Circus and Allison Iraheta – chosen from among 1600 bands reviewed –  are the tip of the venture’s spear.

Halo Circus and the other bands will shoulder most of the marketing work by reaching out to their fan bases on social media, offering them a chance for an intimate concert and to hang out together. This deepens the bands’ relationship with the fans, even if they don’t set up concerts.  However, Halo Circus and RoadNation  are confident that they will – the startup has serious money riding on it and Halo Circus is betting the success of their summer tour – a big bet for a band on the cusp of going national.

RoadNation encourages the bands to set reasonable goals and Hager’s goal for the first tour  is to meet fans in all 50 states and break even financially. We will see if Halo Circus meets those goals – I suspect they will exceed it.  Hager is a visionary businessman and philosopher in addition to being a world class producer and stellar musician.  He understands the big picture and has the experience in all aspects of the music industry to spot a winner when he sees one.  Halo Circus is always a winner; I predict that the combination of Halo Circus and RoadNation will not only be a winner, but will transform the music tour business.