Mary Scholz is back, more beautiful, more edgy and stronger than ever at Room 5 Lounge. - Gypset Magazine

Mary Scholz is back, more beautiful, more edgy and stronger than ever at Room 5 Lounge.

Home » Music » Mary Scholz is back, more beautiful, more edgy and stronger than ever at Room 5 Lounge.

West Hollywood. Last year when I reviewed Mary Scholz’s live performance at Hollywood’s Hotel Café, I wrote,  “To see Mary Scholz is to fall in love…  you want to spend the rest of your life listening to her”.  I saw her sing live again this weekend and I am still in love. After eight months on the road she has become even more beautiful, more edgy and stronger on stage than ever.  Her performance at the Room 5 Lounge on Saturday night showed us a more mature song writer, a  more confident performer and an artist completely at ease with making everyone in the room fall in love with her.  And they did.

Scholz treated the room – which was packed with friends, fans and family, judging from the cheering and banter – with 12 songs, most of them new tunes that she wrote while on the road, plus a few from her previous albums. After a mic check and some friendly banter, she quieted the room with her achingly melancholy “Mournful Noise” from The Girl You Thought You Knew album. Standing alone, barefoot in the soft red light of the Room 5 Lounge stage, her choice of a haunting, familiar melody, rather than the more usual up beat song to get the audience’s attention, signaled a talent completely in control.  She had us from the first note.

She seamlessly segued into the higher tempo but equally emotional “The Girl You Thought You Knew”,  bringing us out of our reverie but still under her sway. You could see the fans at the tables mouthing the words – this is what they were here for…songs they knew from a woman they loved.

Scholz gave us a little break with jokes and conversation with friends in the audience while she tuned her guitar. She had been away for too long, she said, and it was so good to be back in LA – as soon as she finds an apartment. While we mentally scanned our friend lists for vacancies, she launched into “I Can’t Tell You Why”, from the same album, pulling out all the stops on her guitar and loosening up her voice to give it a bit more of that punch-in-your-stomach-muscles feeling she is so good at – the ultimate earworm hook line, But I can’t tell you why.

This has always been a particular strength of Scholz’s, to pull at your emotions viscerally while injecting hooks in your lizard brain where they stay and keep squeezing out the feelings.  We also experienced this power in a new song, “Across That Line” where  she captured us like she does in, “Someone Else’s Wife”  (which she didn’t sing, although I wish she had).

But she did sing next what may become my favorite new song, “The Stubborn Song”. Introducing it with a story , she practically attacked  her guitar strings while delivering strong and resolute lyrics: I‘m not saying that I love you/And I’m not saying that I care/I won’t tell you that I miss you/I won’t say it here or anywhere. But slowly the stubbornness melted and the heart took over, as it always does with Scholz:.  I’ll tell you that I love you/And fine, I admit it, yes …So fine, you win.  And we did.

After “The Stubborn Song”, Scholz moved to the piano, arranged her floor length gown and sheer midriff over an folksy white knit halter, and told us a bit about her European Adventures.  “I am a woman travelling alone with a guitar case,” she said, “and I’m OK with that.”  Then she turned to the piano and blew us away with a new song, “Give Me One More Day”, with a razor edge to her voice that I have not heard before.  This was real pain, need, a cry of desperation that lanced through us. This was a knife to the heart that her albums and previous performances hinted she was capable of, but not with this power.

It was an emotional relief when she moved  back to the guitar and delivered a seemingly matter of  fact, but in fact  still pretty emotional conversation song,  “Strength/ Hope/You”,  which picked up the tempo as Scholz notched up the rhythm and shifted her voice from resolute to pure flight.

The flight continued with a medley that  included songs by Walk The Moon, The Hooters, Will Smith, Taylor Swift, Kelly Clarkson, Whitney Houston and Florence and the Machine. And then her cover of the 1958 Bobby Freeman classic “Do You Want To Dance?”. As she warned us before the first note, this was her take on it, and it was – joyful, but edged with pain and loneliness, as only Scholz can do. She returned to the piano for another new song written on the road, “Now You Know”,  bright and foot tapping, but still tinged with real life.

Back to the guitar and while re-tuning she told us about some of the darker days in her travels, including being harassed in a park in Dublin and treated rudely in some Irish clubs. That of course led to a song – which she assured us may sound like she is down on men, but she’s not really.  Good thing she told us –“Feet Keep Moving” does start off with a rainy tale of sleeping on couches and putting up with jerks, but as she promised, ends well enough for a girl who has to sing for her supper every night.

Scholz wrapped up the night with “Run, Baby Run” from The Girl You Thought You Knew Album” and another haunting new ballad delivered with feeling and flight, “Carry On”.   She would have carried on herself if the clock hadn’t run out, as the audience made very clear they wanted more.

But Mary Scholz will carry on, taking the eight months of singing for her supper on the roads in Europe and transforming it into more songs, more albums, and hopefully more live appearances in larger venues where the clock doesn’t run out because she is headliner that she deserves to be. 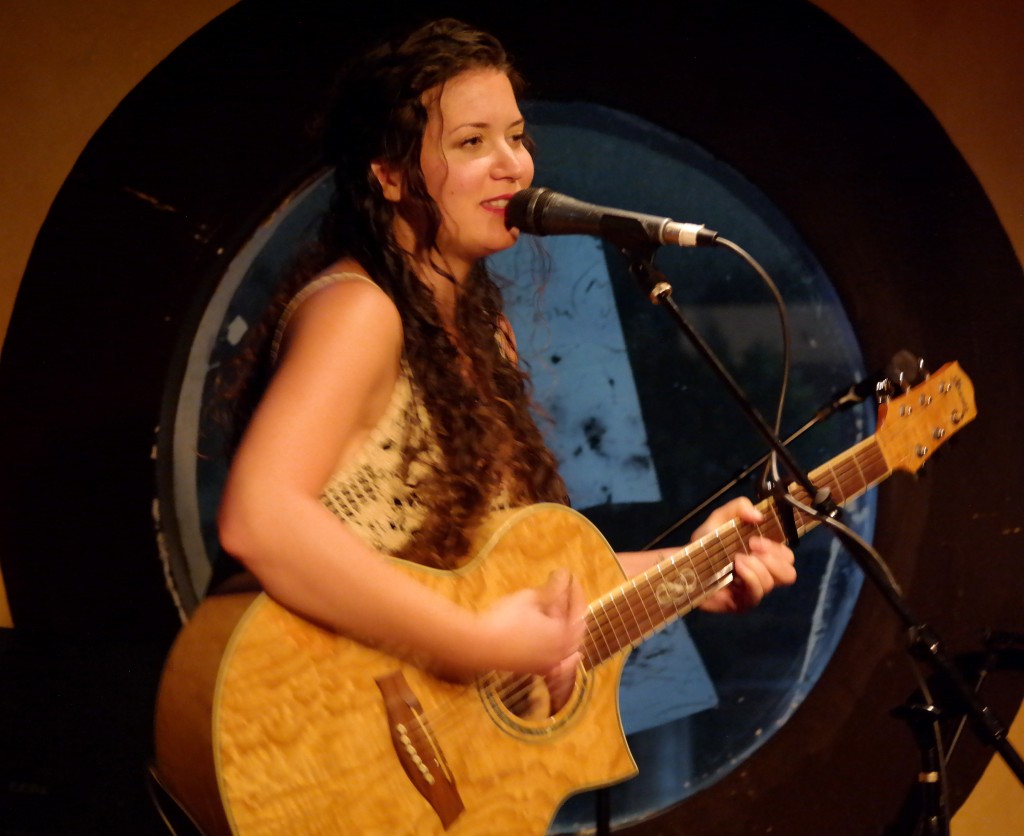