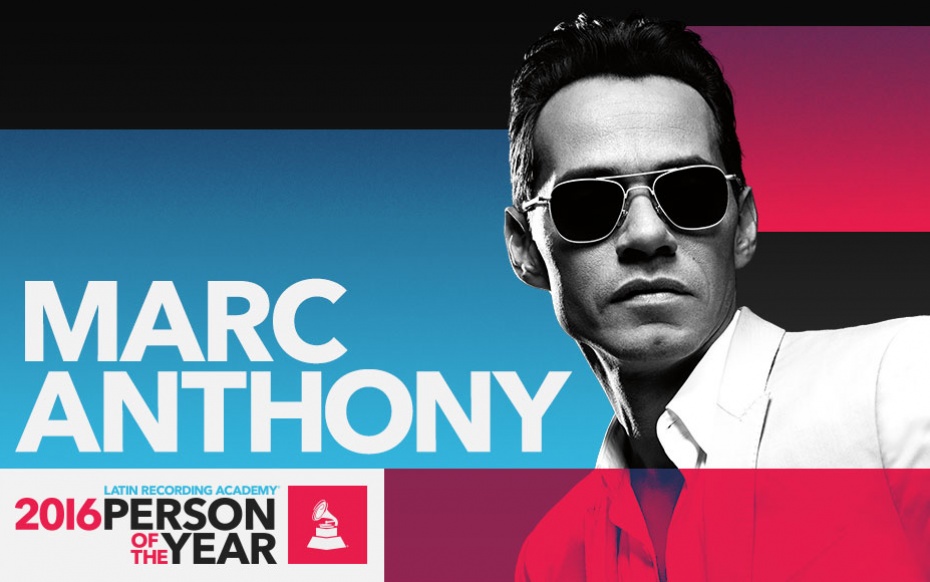 Five-time Latin GRAMMY® and two-time GRAMMY® winner Marc Anthony will be honored as the 2016 Latin Recording Academy® Person of the Year on Wednesday, Nov. 16 at the MGM Grand Garden Arena in Las Vegas. The star-studded gala and tribute concert will feature renditions of the award-winning singer’s renowned music catalog by an impressive array of notable artists and friends. A significant portion of the net proceeds from the gala will benefit the charitable work of the Latin GRAMMY Cultural Foundation®, which provides  assistance through scholarships, fellowships, grants, and educational programs year-round to music students.

“Marc Anthony is synonymous with excellence and commitment to perfection,” said Gabriel Abaroa Jr., President/CEO of The Latin Recording Academy. “His impressive stage presence, astonishing vocal range and salsa-inspired rhythmic sound stems from his Caribbean roots. The world knows him as a music king; however, on Nov. 16 the award-winning singer will not only be honored for his musical legacy but also applauded for his relentless humanitarian efforts, which speak to his generous spirit, passion, and commitment to making a positive impact on more than just the stage.”

“I was ecstatic when I received the news about this special recognition from the Latin Academy of Recording Arts and Sciences.  It is an honor and I am humbled to be selected as The Person of Year recipient for my contributions as a music ambassador and my humanitarian efforts.  I am looking forward to an unforgettable evening at this year’s gala benefiting the Latin GRAMMY Cultural Foundation and can’t wait to celebrate in the company of family, friends and our music industry peers,” said Marc Anthony.

A multifaceted tycoon, Anthony is one of the most influential vocal performers of our times and a passionate ambassador of Latin music and culture. The chart-topping singer has sold more than 12 million albums worldwide and received numerous gold and platinum certifications from the Recording Industry Association of America. He has also been recognized by New York magazine as one of the 10 most influential New Yorkers, inaugurated into the Billboard Hall of Fame in 2012, and given a Lifetime Chair’s Achievement Award by the Congressional Hispanic Caucus Institute in Washington D.C.in 2009.

The prestigious event precedes the 17th Annual Latin GRAMMY Awards® held at the new T-Mobile Arena in Las Vegas. Tune in to Univision Network for the live broadcast on Thursday, Nov. 17 at 8 p.m. ET/PT (7 p.m. CST.)  For information on purchasing tickets or tables to this year’s Latin Recording Academy Person of the Year gala, please contact The Latin Recording Academy ticketing office at 310.314.8281 or ticketing@grammy.com.

The Latin Recording Academy is an international, membership-based organization comprised of Spanish- and Portuguese-speaking recording artists, musicians, songwriters, producers and other creative and technical recording professionals. The organization is dedicated to improving the quality of life and cultural condition for Latin music and its makers. In addition to producing the Latin GRAMMY Awards to honor excellence in the recorded arts and sciences, The Latin Recording Academy provides educational and outreach programs for the Latin music community either directly or through its Latin GRAMMY Cultural Foundation. For more information about The Latin Recording Academy, please visit LatinGRAMMY.com. For breaking news and exclusive content, follow us at: Twitter, Facebook ,Instagram, Vine, Periscope, YouTube, Pinterest, Google+ and Tumblr.

The Latin GRAMMY Cultural Foundation was established by The Latin Recording Academy to promote international awareness and appreciation of the significant contributions of Latin music and its makers to the world’s culture, and to protect its rich musical legacy and heritage. The Foundation’s primary charitable focus is to provide scholarships to students of Latin music with financial needs, as well as grants to scholars and organizations worldwide for research and preservation of diverse Latin music genres. For more information about the Latin GRAMMY Cultural Foundation, please visit LatinGRAMMYCulturalFoundation.com. For breaking news and exclusive content, follow us at: Twitter, Facebook and Instagram.