Lunch with a Syrian Refugee 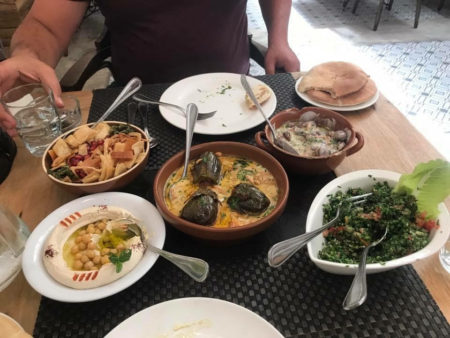 I met him Tuesday July 18th around 12 PM. He walked in the office with a smile on his face ready to take me around town. He works with both programs I’m partnering with here in Amman. For the first few hours we didn’t say much to each other as we were running errands to go buy the food for the distribution and partly because I was exhausted. In the taxi I could barely manage to keep my eyes open and it seemed he was entertained speaking to the driver in Arabic. It is excruciatingly hot in Jordan this summer they tell me, breaking records from 17 years ago. After we were finished buying the supplies he asked me if I wanted to have lunch at a Syrian restaurant. Stoked, I gladly accepted. We walked into a beautiful restaurant near the 2nd circle in which he was greeted by the staff. It was obvious he was a regular here. We sat in a nice table in the back of the restaurant being we were the only patrons. Not long after he ordered the food. The main dish, eggplants stuffed with ground meat in a yogurt sauce on a bed of thinly layered friend bread was the dish they were known during for. I explained to him a few times how I was a pescatarian to which he didn’t understand or accept. He advocated for this dish and justified it because the meat was “halal” so I accepted. I accepted I wouldn’t win this battle just like I never won with my Palestinian great-grandmother when she served me a second mountain of food when I was growing up.

Right after we ordered, he began telling me about his life. He led with the story about his parents. It’s been a year since he last spoke to them because he hasn’t been able to locate them. His father a couple years back, got wind ISIS was on their way to their hometown and fled taking his sisters out first, given ISIS is known for taking women and marrying them. ISIS was expected to arrive 2 days after they received the news but stormed in just a couple of hours after his father and sisters had departed. They ransacked the city, killed many people, made the survivors burn their clothes and wear their uniform and kidnapped the rest. With that rest were his mother and brothers which ISIS took to one of their camps. As soon as the father found out, he set out to the camp in an attempt to rescue the remaining members of his family. ISIS put the word out and misled people saying that if you were over 65 and someone came to claim you, you were free to go. Upon his father’s arrival to rescue his family, he too was imprisoned. As soon as my friend found out about his family he found a way to pay someone to smuggle them out of the camp. He paid about $3k USD and the coyote took his money and ran. A few months later, his family managed to escape but as of about 8 months ago, if I’m not mistaken, he has been unable to locate them. My eyes began to well up, as did his.

Then he began talking about his sisters. One of them, who managed to escape with her two children, was married to a taxi driver who was very well known in the city they used to live in. They had come across a group of 12 children, mostly girls, who had lost their families in the war and the children immediately recognized his brother-in-law. Not having anywhere to go they took the 12 children in. Shortly after, they found an uncle to four of the children and were left with 8 girls and their own two children, in total 10 mouths to feed and take care of. Her husband buckled under the stress. He threatened to leave her if she did not send the 8 girls away. She chose to do the right thing and he kept his promise leaving her alone with 10 children to look out for. My friend pulled out his phone and showed me a picture of them. I wept. He wept. He took a pause as the seemingly endless warm stream of tears continued to flow down on both of our faces.

Out of breath and in between sobs, firmly pressing the ball of tissue on my eyes, I managed to ask about adopting Syrian orphans. He explained to me how this is not possible due to cultural and religious reasons. Syrians and Jordanians rather it be done by their own people and of the same religion which inevitably will leave a lot of kids parentless given the status quo. Hearing this made me choke on my own tears and in between my quiet sobs I explained to him how I wanted to adopt because I wasn’t sure I wanted to bring a child into this fucked up world. He nodded in agreement and told me how he wanted to adopt a couple of the girls his sister was raising but for some reason I’m not clear about hadn’t been able to.

He mentioned his other sister who fled the city she was living in shortly after ISIS arrived. A member of ISIS said he wanted to marry her 14 year old daughter so she lied and said she was already engaged to her cousin. They asked for proof. Understanding the severity of the situation, that same night she packed lightly and fled to the Jordanian border with her daughter. Most of the camps were full but my friend managed to get her though. His sister was part of the very last group of refugees Jordan legally let into the country. I asked about her whereabouts and he explained she was living in a refugee camp about 75 km from Amman. “I haven’t seen her in over a year. I don’t go see her,” he said with tears in his eyes. “The last time I went to see her they didn’t let me in. I couldn’t touch her. I couldn’t hug her or my nieces. She was so upset she asked me never to come back because the pain of not being able to hold me was too great,” he elaborated. I felt broken. I started to break down. It took everything I had not to lose it. He started crying. The food arrived and I had lost my appetite. I had nothing to say. I was consumed with sadness, immersed in empathy, present, feeling his pain. A million frames scrolled through my mind. I felt lighting rods of anger, questioning the very existence of this god people believe in, questioning humanity and our very existence. For a moment I felt lost.  Everything I had seen and read in the news about Syria suddenly became real, so devastatingly real.

He also shared stories on how he was mistakenly arrested and tortured by the Syrian police when they confused him for someone else. He was locked up for 10 days with a broken hand that became so infected they had to wait 40 days to operate in order for the swelling to subside. He mentioned two of his best friends who died in the war and the countless number of friends whose family members died in the war, lost limbs, were unemployed and severely depressed. One story stood out in particular. One of his friends was watching the news one day while they were airing a 12 minute long ISIS rant. At minute 11 they brought a man out and beheaded him, that man was his friend’s brother. I couldn’t believe what I was hearing, it seemed like a horrible movie. I wanted to scream!!! He went on to explain how his friend is so depressed he can’t bring himself to do anything. I was speechless. There were no words I could possibly utter that would be fitting in a moment like this. Absolutely no words.

After several minutes of silence and I asked him how his religion, Islam, explained this on an esoteric level. He said he honestly didn’t know. He said he wasn’t religious and didn’t practice Islam but he had long battled with this. The only conclusion he arrived at was that this war brought his people together. In Syria, he lived a good life, he came from a wealthy family. He elaborated on how he only cared about going to nightclubs and partying and when he would see poor people on the street, including children, he had no regard for them. He had never cared about the less fortunate, “the war changed me, it made me into a better man.” Overcome by sadness and anger I told him that was a beautiful perspective while simultaneously questioning it. “Why would people have to endure something so brutal to be more united? Why would a god allow children to die, become orphans, get kidnapped and raped?! Why?!?” I said in between tears. “I refuse to believe any supreme being would allow children to suffer this way. There will never be an explanation I will be satisfied with, never. I live 7k miles away and my heart is broken about the Syrian crisis. I am here trying to help. I don’t need to endure something so catastrophic to help others. I can never accept this,” I cried. He nodded. He understood where I was coming from and mentioned he too thinks this way in his head but not his heart. “In my heart, I believe there has to be a reason for all of this. Maybe it’s karma, I don’t know. There has to be a reason,” he said. I let it go. I had to. I was no longer present in a state of empathy I was selfishly battling my own beliefs about god and humanity. I wiped my tears and the rest of the mascara on my face and let it go. I had to.

We then ate some of the best food I’ve ever had! I had heard how proud Syrians were about their food and now I understand. Every other word out of my mouth was “wow.” He got a lot of pleasure out of watching me eat his people’s food for the first time. He proudly told me about his catering side business and showed me pictures of the dishes he cooks. He also showed me pictures of his family, their old farm, the camels they bred, and him as a young boy. It was a beautiful moment to be able to share this with a complete stranger. When it was time for the bill we literally argued about who would pay it. I pleaded with him to please please let me pay for the bill. He refused. This went on for at least 3 minutes. The server took his side of course and I had to accept. “You’ve come so far to help my people. I want to thank you on behalf of my people for being here and helping.” I smiled. I knew I was meant to be here, at this moment, with this man, in this city, on this date. I knew that I needed to do exactly what I’m doing, for these people, right here.

For more info and/or to get involved please email
Loren Medina, CEO & founder, at
TravelWithPurposeJourneys@gmail.com 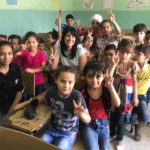 By: Loren Medina Travel with Purpose