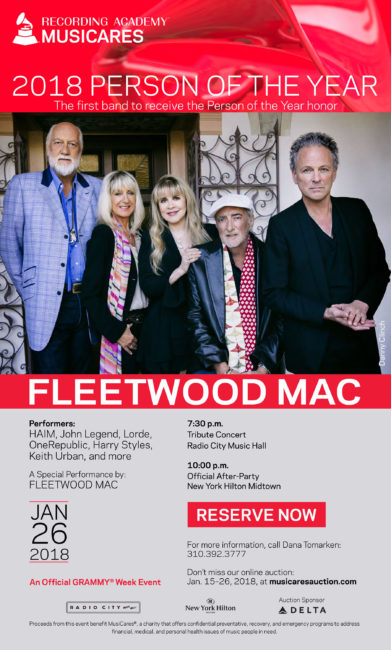 WHAT: Fleetwood Mac—the first band to be honored as the MusiCares Person of the Year—will be celebrated for their extraordinary creative accomplishments and significant charitable work. Proceeds from the annual Person of the Year tribute—now in its 28th year—provide essential support for MusiCares, which ensures music people have a place to turn in times of financial, medical, and personal need.

The MusiCares Person of the Year tribute is one of the most prestigious events held during GRAMMY Week and was last held in New York City in 2003. GRAMMY Week culminates with the 60th Annual GRAMMY Awards® at Madison Square Garden on Sunday, Jan. 28, 2018. The telecast will be broadcast live on the CBS Television Network at 7:30 p.m. ET/4:30 p.m. PT.

The MusiCares Foundation® offers health and human services and programs to members of the music community, including emergency financial assistance for basic living expenses such as rent, utilities, and car payments; medical expenses, including doctor, dentist and hospital bills; and treatment for HIV/AIDS, Parkinson’s disease, Alzheimer’s disease, hepatitis C, and other critical illnesses. MusiCares offers nationwide educational workshops covering a variety of subjects, including financial, legal, medical, and substance abuse issues, and programs in collaboration with health care professionals that provide services such as flu shots, hearing tests and medical/dental screenings. MusiCares provides access to addiction recovery treatment and sober living resources for members of the music community. Staffed by qualified chemical dependency and intervention specialists, MusiCares offers Safe Harbor Room® support, sponsored in part by the Bohemian Foundation, to provide a network to those in recovery while they are participating in the production of televised music shows and other major music events. MusiCares holds weekly addiction support groups for people to discuss how to best cope with the issues surrounding the recovery process. The MusiCares Sober Touring Network is a database of individuals across the United States who can take music people to recovery support meetings while on the road.

ABOUT MUSICARES
A friend and ally of the music community, MusiCares was established by the Recording Academy to safeguard the health and well-being of all music people. A four-star charity and safety net in times of need, MusiCares offers confidential preventative, recovery, and emergency programs to address financial, medical, and personal health issues. Through the generosity of our donors and volunteer professionals, our dedicated team works across the country to ensure the music community has the resources and support it needs.