Inside the world of singer-songwriter Leyo - Gypset Magazine

Inside the world of singer-songwriter Leyo

Home » Collective » Inside the world of singer-songwriter Leyo

Leonardo Mendez is an old soul with a big vocal range, who is determined to make his mark in the music industry. Known artistically as Leyo, a name given to him by his fans, he grew up in southern California, but was raised on Spanish music. “Spanish music is what my parents listen to when I was growing up. Entonces desde que era chico me ha encantado la música Latina, como los mariachis que llegan el corazón con mucho sentimiento”. It is that emotional connection to music and his belief that he can touch people’s heart through song, that makes this rising artist one to look out for. Leyo opens up and candidly shares with Gypset his journey as an artist and where he hopes his career will take him.

Why did you decide to pursue singing? What do you hope your music conveys to people?
Men sometimes have a hard time being vulnerable and expressing their feelings, but when I sing, specially when I am on a stage, it’s easy for me to get in touch with my feelings, be vulnerable and express what at times can be so hard to say. As an artist what I want is for people to feel everything I am singing. Even though I am young, I feel that I have an old soul and that with my voice I can convey all those feelings of love, sadness, pain, heartbreak and really connect with people. It drives me. That’s what I love.

Tell us more about this new single you collaborated with the talented J2 on, Sabor A Mi. How did it come about?
J2 is someone whose work I really admire, so to have the opportunity to work with him has been amazing. My publicist shared with him some of my work and he liked my voice. Soon thereafter, he reached out to me and told me that he had the perfect song for me. So, he sent me Sabor A Mi and after hearing only a few seconds of the new arrangements of this classic song I was in. I just love the soulfulness and simplicity of this traditional Spanish type of ballad in which an outpour of emotions is carried out by the voice. It was a great collaboration. 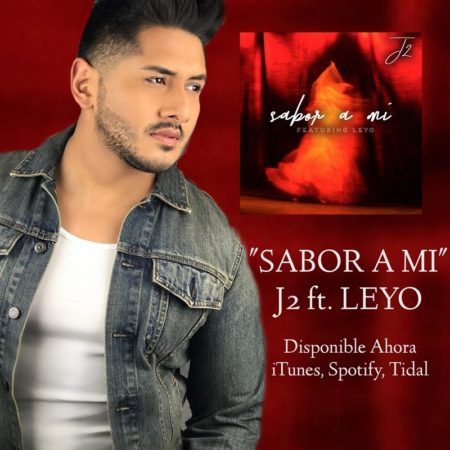 Click to listen to this beautiful song on SoundCloud

Your singing is so powerful, bold and honest. What fuels it?
Everyone has a story and mine has truly shaped how I sing. I grew up with an alcoholic father and a mother who had to work two jobs to make ends meet. I saw how hard my mom worked and I really wanted to do anything I could to lessen her load. So, as a kid, I ended up taking on a lot of the house chores and often helped out with my baby sister. That’s why I didn’t have a typical or fun childhood, because from early on I had a lot of responsibilities. Additionally, and what often made things especially hard, was having to take care of my dad, dealing with his verbal abuse, and his rowdiness. So from very early on I lived an emotionally charged life and music became my outlet. I would go to church and sing prayer songs to lift my spirits. Singing would make me feel good and I just always just gravitated towards it. As I got older, I began to cling on, more and more, to Spanish music, because the songs evoked so many emotions. That spoke to me. Through music I was able to endure and overcome many challenges in my life.
My brother use to tease me and say I knew how to sing all of the Telenovela songs. Then, he would ask me to sing for him Michael Jackson songs and we would end up also singing Topollillo and even Xuxa. Singing and making him happy made me smile. And that’s what music did for me. A mist all the hardship in my life, music brought me joy. So now, as I am going through this amazing journey and pursuing my dream, I tap into that little kid inside me who experienced so much turmoil, who longed for brighter days, and who found solace and happiness through singing.
I believe that God puts everything together and bring the right people into your life. He molds you through challenges and experiences that make you grow. When I think back on all the hardships that I have gone through, I now know that they have strengthen my perseverance, made be better equipped to handle difficult situations, like rejection, and prepared me to survive and succeed in this industry.

How would you describe your sound?
It’s hard to describe my sound. I try to sing from the heart and hope that that soulfulness comes across in my voice. I love music that moves and connects with people. That is why belting ballads is something that touches me to my very core. I guess I see myself like the male Spanish version of Adele. She has such a powerful voice that carries so much emotion, people can’t help but be moved. Through her music she conveys so many heartfelt and nostalgic feelings. It’s so beautiful. So I guess that’s the type of sound I am pursuing, a sound that truly connects with people. Plus, her music is timeless, classic and never really goes out of style. That’s the type of artist I want to be.

What does it mean for you to be a Latin artist?
I am so proud to be Latino! Nosotros somos luchadores, apasionados, alegres… That’s why being a Latin artist and representing latinos well is something that I take very seriously.
One of my greatest goals as an artist is for Latin audiences to identify themselves with my music. Music is a big and beautiful part of our culture and strong voices like those of Marc Anthony, Vicente, and Jesse & Joy transmit love and pain through their singing. I chose to sing in Spanish not only because it’s such a beautiful language, but also lyrically it’s so rich In Spanish the words are just so moving. ¡Hay algo mágico en decir “te amo!”. It’s just so romantic. And that doesn’t always come across in English and other languages, but in Spanish it just comes across so pure. Being able to express yourself in Spanish is such a gift and I just feel fortunate to be able to do it. It’s in my blood. So, even though I like singing in English as well, and growing up in California it’s a big part of me, me sale del corazón cuando entono una canción en español. I feel so lucky and honored that Spanish music plays such an important role in my life.

Pursuing ones dream can be hard and at times lonely.. It requires true grit and love for ones artistry. How has this journey in the music industry been for you thus far?
It’s been incredible, but it has also been hard. There is no such thing as over night success. To make it in this industry it takes hard work. Even though singing brings me so much joy and I feel lucky to have the opportunity to make my dream come true, this journey is also composed of a lot of tears, lots of meetings, and sleepless nights. At the end of the day it’s really worth it, but you really have to want it.
I hope that I am setting a good example for new artist that are coming up in this industry and that I am able to show them that if I can do it so can they. Just like I have felt inspired by so many before me, like Juan Gabriel, Jose Jose and Christian Castro. However, it truly requires commitment, determination and discipline. You have to really want it because like I just mentioned, the road can be tough, at time lonelu,
and long. Having a supportive family and friends has been key, but even they don’t always know everything that goes on and all that it takes to make it in this industry.
I also feel that I have been very fortunate, because I have had amazing people who believe in me come into my life. Ford has also been a big supporter of my music and I am very lucky to have been able to establish such a strong partnership with them. This industry can be hard, and it can get costly, so to have them believe in me has been a blessing.

What has been the biggest lesson you have learned while on this journey?
Sometimes you can encounter self-doubt and wonder if you are ever going to make it. And what I have learned thus far is that if this is your dream and what you are truly passionate about, you must believe in yourself and just keep going. I remember one day I was down on myself, but I had and interview at a radio station so I just had to push myself to go. Once I was there, when the interview was about to wrap up, they said that they had a surprise for me. Next thing I know Jose Jose was on the phone congratulating me and telling me to keep up the good work. I couldn’t believe it. In fact, at first, I thought it was a joke, but it wasn’t. Jose Jose had heard me sing and just said “mijo quiero decirte que sigas para adelante, escuche tu canción y tienes un gran talento. Por eso te quiero motivar, porque necesitamos más voces como la tuya en esta industria”. I was in shock long after that call, because one of my idols had congratulated me. It was not only encouraging, but it was a reaffirmation to me that I was on the right path, because if Jose Jose took the time to call me then I must be doing something right. That call also reminded me of how blessed I am and it made me realize that I need to enjoy this amazing journey I am on. No es fácil, pero la verdad es que esto es lo unció que quiero hacer con mi vida es cantar.