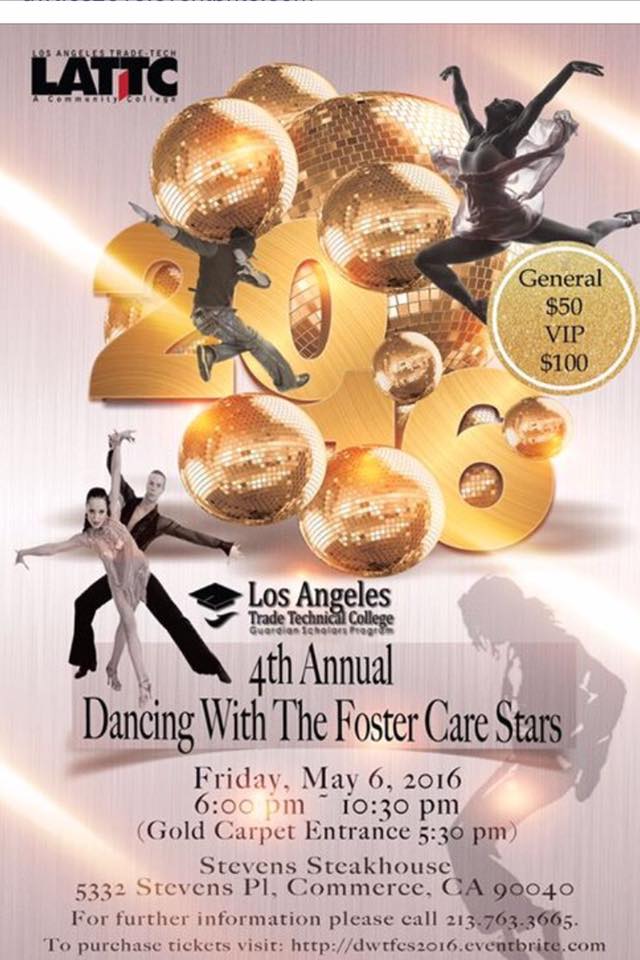 The flickering of camera flashes and the sounds of laughter and joyful cheers can be heard across the campus of the Los Angeles Trade Technical College (LATTC) as the first Dancing With The Foster Care Stars (DWFCS) fundraising gala took place on March 7, 2013. Dressed in formal attire and holding programs for the evening’s schedule of events, esteemed guests and college officials gathered to view students and a couple of professional dancers entertain and inspire them. When the evening came to an end, standing ovations and congratulations were offered for a job well done. Back then it was a small event aimed at raising funds to continue supporting the college’s Foster and Kinship Care Education Guardian Scholars Program (GSP) after state funding was cut in 2011. Now, the fundraiser has grown over the last couple of years into an impressive fundraising spectacle catching the attention of both local politicians and celebrities alike while raising a cumulative $150,000 for the past 3 years.

The brain child of LATTC’s Director of the Foster and Kinship Care Education Department, Dr. Dione Washington, the Dancing With The Foster Care Stars event is in its final stages of preparation for the 4th year coordinating logistics, staging, invitations, performers, and promotions. This year, on May 6, the event will be held for a second time at Steven’s Steakhouse in the City of Commerce. Festivities will quickly begin at approximately 6pm and will run throughout the evening. Each successive year there has been a theme for the event. Last year, it was Traveling to Paris, France. The venue was decorated to make the audience feel like they had traveled to the romantic European city with images of the Eiffel Tower and French-inspired paper-weights, brochures, and trinkets adorning the locale. In its 2nd year, the DWFCS had actual hosts from the famed celebrity talent show from which the event was inspired, Dancing With The Stars, attend offering a mock judging segment providing dancers with tips and praise on their recent performances. Foster youth who were participating were exposed to celebrity interactions and personal feedback which bolstered further excitement for future shows. The theme this year however will be a tribute to the late pop star, Michael Jackson, incorporating everything from music to dress to even a special performance from an MJ impersonator. Two categories of performances are scheduled where 12-15 acts will be presented. The first set of performances will be the Pro-Am section where professional dancers are teamed up with students. The students will perform a routine in the style of dance that they have chosen and will dance it with their respective dance coaches. They only have a couple of months to learn the dance and the routine itself before show time. After intermission, the professional section will begin where semi/professional dancers perform their routine dazzling spectators and showcasing their talents. At the end, guests vote on the best teams of dancers presenting them with several awards and prizes.

Currently, the organizing team for the event is working hard to promote the fundraising gala and soliciting donations in order to help make this year’s event particularly spectacular. Aside from decorations and volunteers, the program itself is looking for donations pertaining to costumes, make-up, furniture, event equipment, financial contributions, and any other pertinent donations. Seasoned professional dancers, DJs, and other members in the dance and music community have already donated their time, energy, and other resources to assist in the gala and help increase its prestige for the evening’s festivities. For example, DJ Joseph Pollack of Tropicalisma Radio has been slated to cover the music and sound engineering duties for the evening. Dance teams from all over Los Angeles will be represented as well performing and coaching the foster youth. They include: Limitless Dance directed by Debbie Wong, West African Dance directed by Jasmin Phillips, Urban Ballroom Dance by Charles Dean Sky Hall, and Victor Brown. Both semi-pro and professional dancers that have also dedicated their time and energy include: Abel Penia and Nicole Bastos, Mike Ticas and Christina Haggerty, Imani Bradley-Camacho and Carlos Sanchez, Jessica Trujillo and Edward Zambrado, Karol Tatiana Delgado and Zweli Barton, Rogelio Moreno, and Kirsten Martin Chin and James Daza. However, more work is still needed to ensure another successful night. Flyers have been sent out. Social media networks like Facebook, Twitter, and Instagram are populated with status updates and pictures on the event including promotional videos and radio interviews.

The more word gets out about the event, the more people have shown interest in it demonstrating a desire to help the foster care youth in Los Angeles succeed prompting a renewed interest on the topic of foster care, more specifically, on programs designed to help youth successfully complete a higher education despite the challenges facing this particular population. The Guardian Scholars Program, for instance, is one of several programs that were created in response to federal measures to help foster care youth succeed in higher education so that they can achieve professional and personal success later in life. Based on the results from the ground-breaking Mid-West Study (Wave 5 of the Midwest Evaluation of Adult Functioning of Former Foster Youth 2011), experts determined that:

When participants in the study were interviewed on their reasons for dropping out of school, responses collectively centered on themes pertaining to unemployment, financial hardships, family obligations (i.e. pregnancy, child care, and emergencies), and the difficulty in the coursework along with their perceived irrelevance to current state of affairs. In other words, collective mitigating factors were found to be particularly influential on the prospects for educational success for foster care youth. As a result of this study, both federal and state policies were designed or upgraded to specifically target such factors. California, for example, had enacted AB 490 which established new rights and duties concerning the education of youth in the foster care system in the state which was later expanded by several other bills particularly AB 12: California Fostering Connections Act to help this particular population achieve sustainable independence once they have transitioned into adulthood. State laws mandated that “before terminating dependency jurisdiction, the state must assist youth in foster care with applying for admission to college, a vocational training program, or other educational institution, and obtaining financial aid, where appropriate.” (AB 490 CA Foster Care Education Law Fact Sheet Feb 2014). 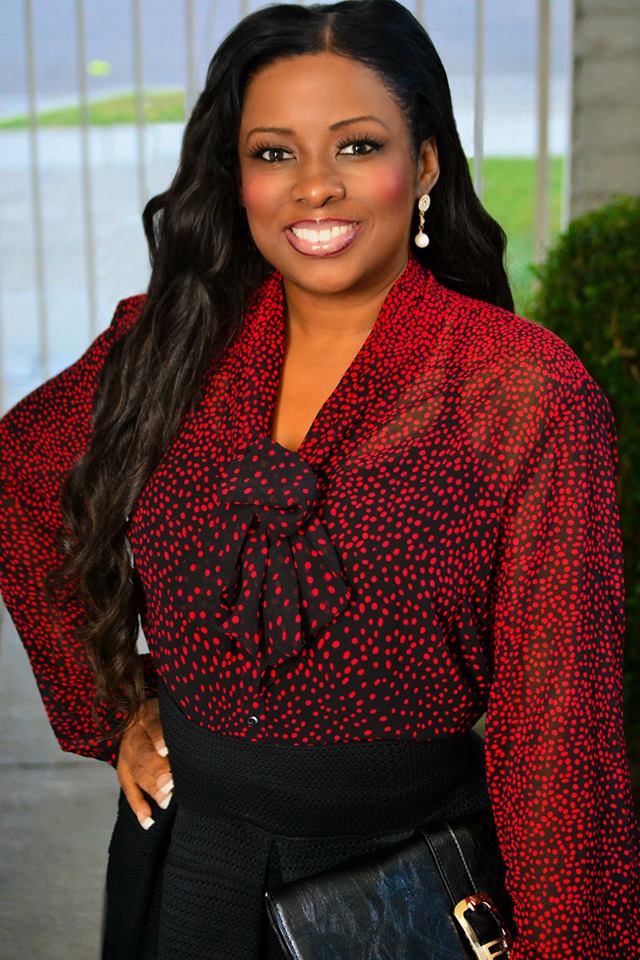 The Guardian Scholars Program (GSP) for LATTC came about a year after state funding for the Youth Empowerment Strategies for Success-Independent Living Services (YESS-ILS) program was cut in 2011. YESS-ILS is a statewide program that receives funding from the Foundation for the California Community Colleges and works with the California Department of Social Services and the hosting community college/university to help current/former foster care youth between 16-24 years of age toward successfully transitioning into self-sufficiency and adulthood. This includes coordinating with local community resources to help youth navigate through mentoring, life-skills training and transition services while increasing enrollment in higher education and career training. In addition, support services that help promote independent living such as counseling, financial aid, and housing are provided.

The GSP was established to pick up where YESS-ILP left off serving 16-35 year olds who are currently/formerly in the state’s foster care system and working towards earning a 2-year degree, a trade certificate, or transfer to a 4-year university. The GSP is one of several academic support transition services that are available at many educational institutions. The general breadth of services the GSP offers include financial aid, housing assistance, academic advisement, employment services from job placement to career counseling, general counseling, and other auxiliary support services like child care, transportation, etc. The GSP at LATTC covers all of these services in addition to assistance in securing the “Ward of the Court Verification Letter” for completing financial aid packets. Also, students can be connected with other services at other LATTC departments so long as they meet the basic requirements: 1) Participants have applied to or are currently enrolled in LATTC 2) They are currently or were formerly a part of the California foster care system, and 3) They are between 16-35 years of age. When the state was providing funding, the GSP received up to $100,000 per year. When funding was cut, the program had to rely on private sponsors and fundraising efforts to keep it going. Currently, the LATTC Guardian Scholars Program receives funding from the Pritzker Family Foundation (a prestigious philanthropic foundation aimed at strengthening institutions in Los Angeles ranging from medicine, higher education to the arts and foster care), Foster Care Counts (a volunteer organization aimed at supporting foster care organizations and families for the improvement of the children in the foster care system), and other fundraising endeavors like the DWFCS event. With the help from such funding sources like DWFCS, the Guardian Scholars Program has been able to continue serving this particular population increasing its membership each year. According to data from the Los Angeles County Community College District (LACCD) Student Information Systems Database released on 9/10/2015, LATTC’s Foster and Kinship Care Education and Guardian Scholars Program figures highlighted the fact that membership increased from 103 members in 2012 to 400 in the Fall of 2014. A majority are minority women between 20-24 years of age who aspire to transfer to a 4-year university (2015 LATTC Fact Book).

Empirical data demonstrates that foster care youth are presented with endemic, mitigating factors that affect their likelihood at successfully completing a higher education which could determine their overall probability of succeeding professionally and/or personally if current social governing safeguards are not maintained or updated. Recent macro-socioeconomic events like the US recession of 2008, inflation, rising unemployment, increased competition in global job markets and changing market paradigms, an out-of-control housing market, rising costs of living standards, an increase in incidents of mental illness, a depleting middle class, and poor national education ratings–to name a few–have an impact on a more micro-level affecting both the states and local communities. Among them is the foster care youth who have to try to navigate the challenges that such factors present them. However, when funds are limited or depleted, programs designed to help this particular population suffer adding to the current problems facing both the nation and the world. One of the pillars of a society is the next generation who will eventually enter the workplace after the current generation retires. If they are not prepared for the current challenges affecting this new century, the society itself will implode. Education along with the experience that applies the principles and concepts learned in the classroom are the most important factors that will secure a prosperous future for any society. Therefore, efforts like the Dancing With The Foster Care Stars fundraiser which help fund programs aimed at giving these youth a hand at leveling the playing field with respect to education and professional success are imperative. Money is tight undoubtedly, but investments are still being made. What better investment is there that offers a higher return in the long run than that of a higher education for a generation who wants to succeed amidst increasing levels of adversity?

If you want to attend the Dancing With The Foster Care Stars event or make a donation, please visit http://dwtfcs2016.eventbrite.com. General admission tickets are available for $50. VIP tickets are $100. For more information on the event and how you can help, please contact Dr. Dione Washington or any of the staff at the Foster and Kinship Care Education Office at 1-213-763-3665. You can also visit their website at http://college.lattc.edu/fkce or join the Facebook page, Dancing With The Foster Care Stars LATT. The event will take place at Steven’s Steakhouse, 5332 Stevens Pl, Los Angeles, CA 90040 on Friday, May 6, 2016 from 6 pm-10:30pm. Event organizers promise an amazing evening with a group of extraordinary, young individuals. You do not want to miss out on such an incredible event.