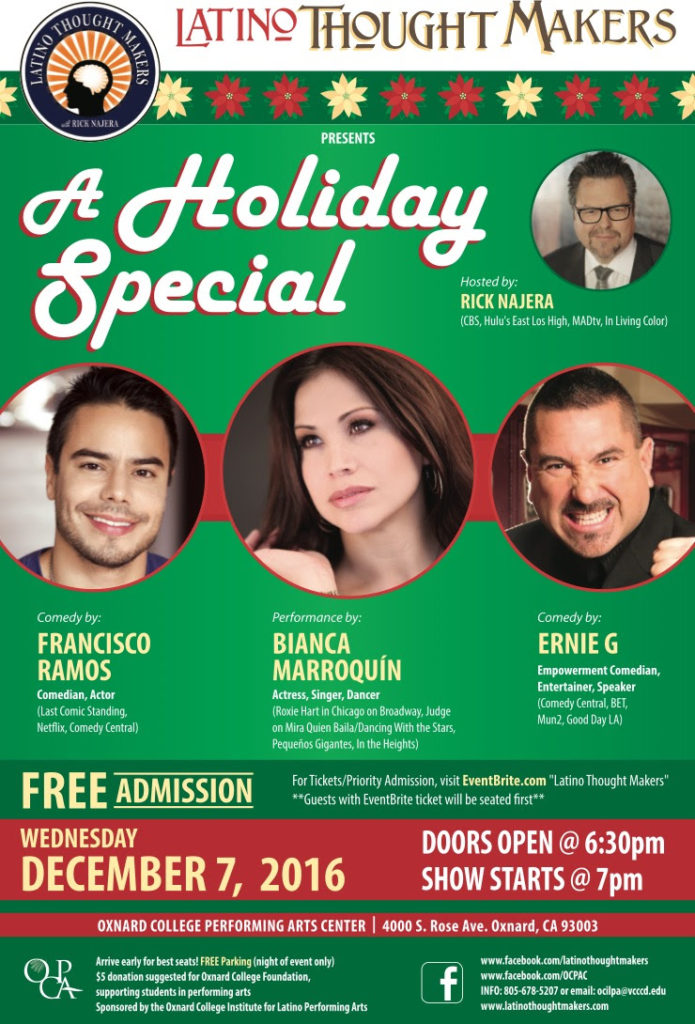 The Latino Thought Makers Series is a nationally recognized forum that showcases the careers of prominent Latinos in Hollywood. Featured actors and notable guests have included Edward James Olmos, Danny Trejo, Josefina Lopez, Luis Guzman, Esai Morales, Emilio Rivera, Lisa Vidal, Marco Antonio Regil, the family of Cesar Chavez, Carlos Portugal and his cast from Hulu’s East Los High, and many more. “Oxnard College is proud to host this innovative series, which is both inspirational for our students and a great resource for our community,” says Oxnard College President Dr. Cynthia E. Azari. “Latino Thought Makers showcases critical thinking as it relates to entertainment and education and provides the audience an opportunity to be a part of a greater dialogue. The Board of Trustees is enthusiastic about making this possible,” adds VCCCD Chancellor Bernard Luskin.

Latino Thought Makers Holiday Special will take place at Oxnard College Performing Arts Building on Wednesday, December 7 at 7pm at 4000 S. Rose Ave, Oxnard, CA 93033. Doors open at 6:30pm. The event is open to the public. Entrance and parking are FREE. A $5 donation is suggested to benefit the Oxnard College Foundation supporting student scholarships in the arts. Register for TICKETS on EVENTBRITE to receive priority admission.