HBO’ The Latin Explosion: a celebration of "todos somos Americanos", but we need more

HBO’ The Latin Explosion: a celebration of “todos somos Americanos” 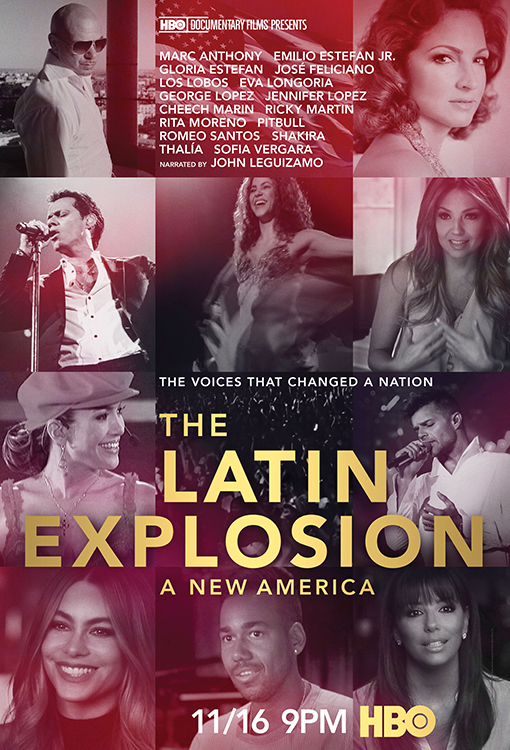 HBO’ The Latin Explosion:  a celebration of todos somos Americanos, but we need more

A joyful record of Latin music in America, except California

Two unforgettable  images flowed across American television screens this week: on Monday the HBO documentary The Latin Explosion: A New America  reprised 1980 news footage showing sign-waving white crowds  in Miami protesting Cuban immigrants fleeing Castro;  on Thursday night on the Latin Grammys, rockers Maná and Los Tigres del Norte unfurled the now famous banner, “Latinos Unidos no Voten Por Los Racistas!”.  Of course, Latin Explosion executive producer Tommy Mottola had no idea that the Latin Grammys would put an exclamation point on his musical/demographic/political documentary which chronicled  – brilliantly but incompletely– the emergence of Latinos as a mainstream cultural, political and market power in the US. But there it was on two nights later on the Latin Grammy stage in front of 10 million viewers, not a bookend to his story, but rather a continuation.

The documentary’s title itself announces Mottola’s  purpose, to lay out the thesis of the “New America”  Latinos are creating through their music and their influence in film and television.  The case he makes is a strong one and not difficult to accept given the obvious Latinization” of virtually every music form played and listened to in America.   Jennifer Lopez tells us in the program, “It’s our time”, but the message of the The Latin Explosion  is much larger;  “our time” is now America’s time.

In this vein, The Latin Explosion purports to trace the growth of Latin music starting in the 40’s and 50’s with its import from Cuba, and later Puerto Rico, to New York and Miami.  The film’s milestones include  Tito Puente and the Afro-Cuban movement in New York City with the Cha Cha and Mambo craze.  It continues with Desi Arnez bringing Latin music into America’s homes with “Babalú” – a Cuban standard – and later as Ricky Ricardo, a band leader  married to Lucille Ball, and moves to first Latina Oscar winner, Rita Moreno, with clips from Westside Story and other films she appeared in, who tells us in a wonderful interview that she still thinks about all the things she could have said, but didn’t when she gave a three- sentence thank you speech at the Oscars and never mentioned she was a Latina.

It continues with its most interesting segment, using film from of the 60’s and 70’s when many one-hit (and some longer) Latin rock and rollers changed their names: Sam the Sham, a.k.a  Domingo Samudio, Cannibal (of the Headhunters),  a.k.a Frankie Garcia, and Freddy Fender, a.k.a Baldemor Graza Huerta.  One who did not change his name was guitarist Jose’ Feliciano, who rose to stardom with his interpretation of the Doors’ “Light my Fire and almost lost it when he was criticized for singing the national anthem at the World Series in a gospel rather than traditional style.  He muses in the program that if he name had not been Hispanic, maybe no one would have noticed.

Other milestones included the showcasing of Mexican-born Carlos Santana at Woodstock, Cesar Chavez and the fight for farmworker rights,  the salsa’ revolution in New York City and Gloria and Emilio Estefan and the global success of the Miami Sound Machine – and extensive interviews and commentary by both Gloria and Emilio –  the rediscovery of “La Bamba”  in 1980 in a film about Richie Valens (Richard Steven Valenzuela), and the rise of tejano music in Texas with the superstar Selena, whose life was cut short when she was shot by a friend at the age of 23.

These milestones are illustrated with wondrous archival and concert footage, interviews with Feliciano, JLo. Marc Anthony, Ricky Martin (but strangely missing from the film were Enrique Iglesias, Christina Aguilera or Paulina Rubio) and others.  However, the archival footage, the joyful music and the great interviews failed to hide the endeavor’s flawed premise – that Latin music was imported into the USA where it took root in New York and later Miami and for a while in Texas.  In fact, Latin music was in the US 150 years before Tito Puente and Ricky Ricardo played to a tiny audience of elites in a handful of clubs in New York City.  It was always present in California, which was Mexico up to 1850 and whose signature music was Mexican.

Generations of Californians have grown up with banda and ranchero and son jorocho and mariachi and  even cumbia from Colombia, originally carried by traveling bands and then as radio came on the scene by a robust network of mostly Spanish-language radio stations that blanketed the Central Valley (and still do).  Baby boomers raised in Southern California tuned into “Border Blasters” – 50,000 watt Tijuana-based stations that broadcast top 40 and Chicano rock and were used to hearing Latino accents on radio stations and going to concerts with Latino and top 40 bands.

The 50’s and 60’s saw the emergence of fusion music forms out of East Los Angeles (now known as EastLos) with  singers like Jenni Rivera,  Chris Montez and the Pacoima’s own Ritchie Valens featured in The Latin Explosion, but never identified as from Southern California.  Carlos Santana, originally from Mexico, also emerged in the late 50’s as a San Francisco icon before Woodstock – all of which was ignored by Executive Producer Mottola and his team, who seemed to focus more on Latino artists who came to the US than those born here.  Los Lobos and Cheech Marin, extensively interviewed in The Latin Explosion, were part of the Latin music movement that began in California but whose origins were ignored in the film.

The bi-cultural stardom of Ricky Martin, Marc Anthony, Romero Santos  hailed in The Latin Explosion rests on a foundation of Latin music from Spain and Mexico and Colombia that predates the founding of the United States and is reverberating through the country, along with the congas and bongos and brass of salsa, Cubano and mambo.

As a celebration of the fact that Latino culture is now America’s culture, The Latin Explosion: a New America is outstanding.  As a documentary of the growth and movement of Latin music into the mainstream, it is just the first chapter.  From the protest crowds in Miami waving “Aliens are Cuban Spies” and “Send them Home to Cuba” signs, to …the No Voten por Los Racistas” banner at the Latin Grammys,  the story of a New America continues.   I hope that Tommy Mottola is hard at work on part 2 to be released just before the 2016 election, with a team of researchers in EastLos recording bands and interviewing cultural influencers and, if we are very lucky, unearthing that young leader quietly laying the groundwork that will take her to the White House in 2024 as America’s first Latina President.

JLo was right:  It is our time – todos somos Americanos.

The Latin Explosion: A new America.