The US Census predicts that by 2020 one out of every three North Americans will be Latino. Ground zero for  this demographic earthquake is East Los Angeles – EastLos to locals – a bubbling cauldron of musical creativity and political energy that is emerging as a national force   by fusing American Latin Music and the movement for social justice. The power and joy of that fusion was on full display Saturday night at LA’s venerable El Rey Theater as the native East LA band, Las Cafeteras, took the stage, accompanied by an international mix of  musicians and dancers who rocked, sang, danced and delivered political messages for over four hours.

Las Cafeteras headlined and curated the evening which celebrated their return home after two tours that took them away for most of the year. They pulled together the innovative energy of Mariachi Manchester, Making Movies, two dance troupes – one modern and one folkloric – and the comedian Filipe Esparza, all of which was filmed by a PBS camera crew for a documentary on the band and the social movement it is helping to drive.

This moment has been a long time coming. Las Cafeteras was formed in 2008 at the Eastside Café, a hub for Latino activism and culture in El Sereno, just south of downtown Los Angeles.  Band members came together to  preserve and innovate the music and dance of Mexico and Latino Los Angeles- EastLos Folkloric, the mixed spanenglish culture which had existed in their neighborhood since at least the 1940’s.  They quickly adopted Son Jarocho, the traditional dance music of Veracruz, Mexico, but combined it with the rock, rap, blues and international music all around them.

As much a community as a band, the six college-educated artists that make up Las Cafeteras named themselves after the coffee of the Eastside Café, but they feminized the name to avoid the machismo of Latin culture and to pay respect to the women of EastLos who they saw working so hard to support families while building a community. They also reworked many of the son jarocho and rock songs they perform to incorporate and honor women in the lyrics which also recount struggles of  their mothers and fathers coming to the US and building a life in what is not always a friendly environment.

All of that coalesced onstage for a performance that was part rock concert, part fiesta, part political rally, part community meeting (for 1000 people), party seminar and every minute electrifying. They were home.  The room was familia.   The energy in the El Rey Saturday night could have lit Los Angeles for a week. Los Cafeteras is simply the best live American Latin Music band on the planet by producing a performance that is was a historical milestone in the new Latino America. 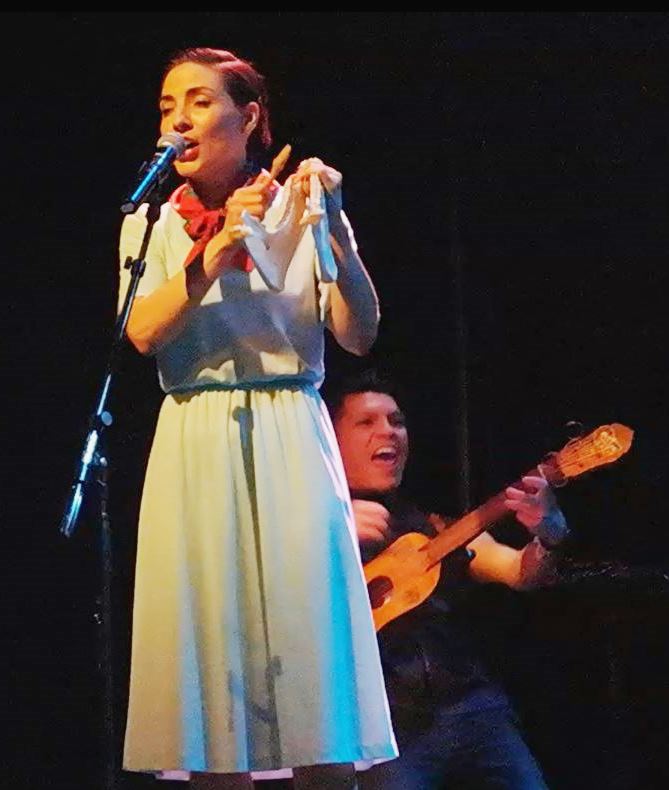 The sound the Las Cafeteras  familia musical uses, and used to its fullest extent Saturday night includes modern drums, guitars and keyboards combined with traditional instruments like the cajon, the jarana, the West African marinbol,  the thumb piano known as the kalimba, the zapateado, the donkey jaw played like a clavé,  the requinto and others new to gringo audiences but familiar to Latinos. The combination was a volcanic mix that rolled through the room Saturday like an African-Mexican-California tidal wave, leaving the sold-out crowd no choice but to dance before, during and after the bands’ sets.

The dancing was not confined to the El Rey’s audience.  The backbone of Las Cafeteras was the zapateado – the electronic dance percussion box that amplified the lightning fast feet of Hector Flores, Leah Gallegos and Denise Carlos throughout the auditorium. Plus performers from the modern Marina Dancers moved with the band on stage and on the floor as the audience made room for them, creating a clearing in a forest of cellphone cameras. This was the joy of Las Cafeteras and the entire homecoming concert – a pure physical, musical, visual joy that carried a message that the Latin culture now sweeping through the United States is not only transformational, it’s fun!

It is also familiar.  Adjacent to songs like “Café con Pan”, “Ya me Voy came  “This Land (is our land) celebrated by a full scale square dance performed on stage by the Ballet Folklorico de Los Angeles in cowboy hats, gingham dresses and do-si-do’s.  The introductions and commentary switched smoothly from Spanish to English, with band spokesperson and jarana player and singer/dancer Hector Flores at one point saying “for all you English speakers who don’t understand the Spanish, don’t worry, it’s all good”.  He was right. It was all good.

In keeping to its democratic activist roots, Las Cafeteras’ homecoming concert was not the usual hierarchical production with warmup bands and then the final famous act. Each group headlined in its own strengths, kicking off a powerful evening from the first note. Mariachi Manchester, which bills itself as “A humble Mariachi tribute to the music of  The Smiths/Morrissey” wasted no time getting the crowd moving and laughing with its humorous mix of mariachi music, rock and roll and over the top funny lyrics  in English or Spanglish.   Male band members wearing mariachi trajes and very un-mariachi baseball caps. thrilled the women in the front row by kneeling in front of them for personal serenades, and then wrapping up the set with a giant selfie with the audience.

They were followed by Making Movies, described by their bass guitarist Diego Chi as a “Latin Dire Straits cover band”,  which picked up where Mariachi Manchester left off and blew us away with their unique combination of Afro-Latin hard rock from Panama, Kansas City and  Guadalajara, Mexico.  Lead guitarist Enrique Chi powered the songs with his voice and guitar, stopping to reach out with his long arms to lead the crowd in left side-right side singing of call and response lyrics oh –ooo –ooo and eh –eh-eh, then unfurling a banner reading “We Are All Immigrants” to wild cheers. 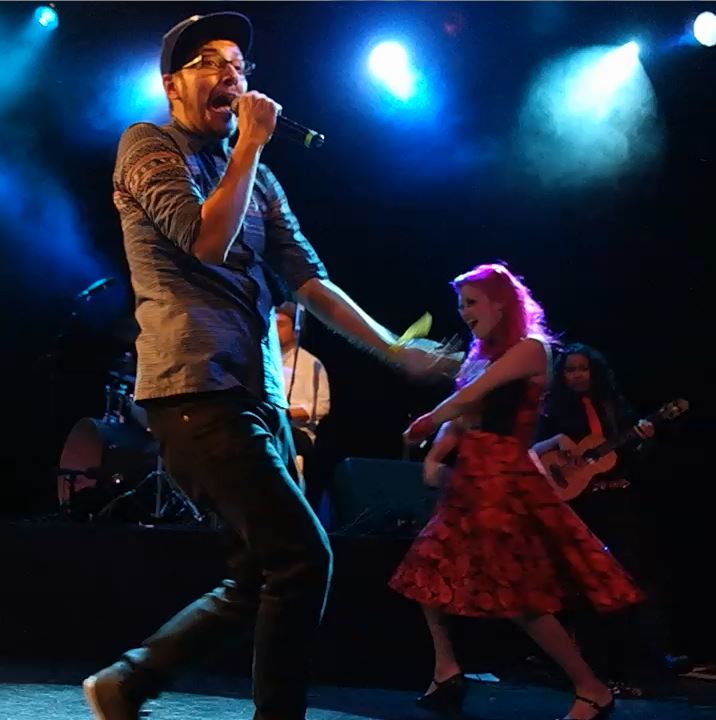 Not content with engaging the audience from the stage, the band jumped down on the floor, waded to the center of the crowd, and played two more songs surrounded by singing, dancing, clapping fans, delighted at the demolition of the celebrity wall.

When Las Cafeteras opened the curtain and launched into “Café con Pan” with the Folklorico dancers and powered through “Chuchmbe” and “Ya me Voy” and “Ni Una Mas”, the political and the musical merged.  With national flags, videos of early Los Angeles, dancers in modern ballet, country western and traditional Mexican costume,  descriptions of the struggle for justice in all communities the message was clear:   Todos Somos Americanos– we are all Americans, whether we are gringos or Mexicans, or African Americans or Columbians or Asians or  Guatemalans or Puerto Ricans or Salvadorians, at this moment in time we must put aside our ethnic and national differences and unite as Americans.

That message was reinforced as drummer Jose Cano leapt down from the kit platform, grabbed a microphone and brought people up the edge of the stage to tell the audience what they would do if they were President of the United States, with many answers asserting the rights of all Americans, and especially those of Latinos and women. Implicit was the knowledge that in  less than a year Latinos would be able to go to the ballot box and decide who that President would be – and not be.

One of the most moving parts of the night was the encore – three songs, one – California-based Rosie and Original’s 1961 hit “Angel Baby” sung by everyone of the 1000 or so people in the El Rey, “Mananitas” with all the bands on stage family style, and finally, Las Cafeteras’ trademark “La Bamba Rebelde”  with all the performers (and a few stage hands) linking arms and leading the audience who knew every word.

Las Cafeteras is both a force of nature and a national treasure, using music and dance and culture to bring a message of unity and justice to Americans of every race across the country.  A few years ago they joked they would play in anyone’s living room; today they play and dance and teach in the nation’s living room. They are not waiting for 2020  for the new Latino America. Their message is todos somos Americanos today.  To that I say Yes! and  Que Vida la Viva as I dance to the music of America’s most joyful and transformational band.