Las Cafeteras at VPAC: a political movement disguised as a musical theater

Las Cafeteras at VPAC: a political movement disguised as a musical theater 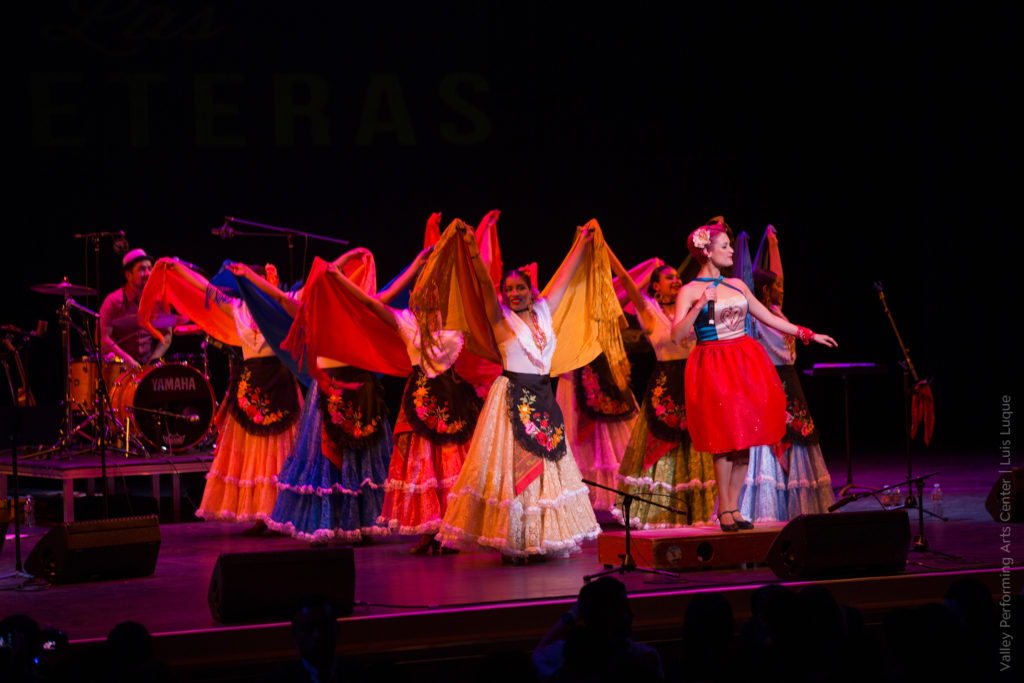 Don’t call Las Cafeteras a band.  Call them a constructive political movement disguised as a musical theater with a history lesson attached. That was very much evident in their spectacular performance Friday, December 9th at the beautiful Valley Performing Arts Center at California State University Northridge. The eight band members, guest singer Maria del Pilar, two dance groups, a choreographer, several costume changes a multi-media projector and a rapper/comedian, together put on a bilingual tour de force of music, dancing, history, film, photography, poetry, spoken word and advocacy centered around the concept of “Beyond La Bamba”.  Regardless of what language you speak or where you were born, Las Cafeteras spoke to you Friday night with words of love, ancestry and community.

Beyond la Bamba started with “La Bamba”.   Standing alone, center stage in a spotlight with a muted beat emanating from the shadowed musicians behind him, Ritchie Valens spoke to us in the form of an actor dressed liked the Latin-American pop star who died with Buddy Holly and the Big Bopper at the age of 17 in 1959.   Valens – whose real name was Valenzuela – took us through his history of growing up in Lynwood, CA, working in the fields until his hands hurt, living with discrimination against Latinos who were in California generations before it was California, changing his name because he couldn’t get a record contract with a Latino name. He left us with Valens’ own words: “I wasn’t trying to change the world, I just wanted to be me….but to know who you are, you need to know who you were.” 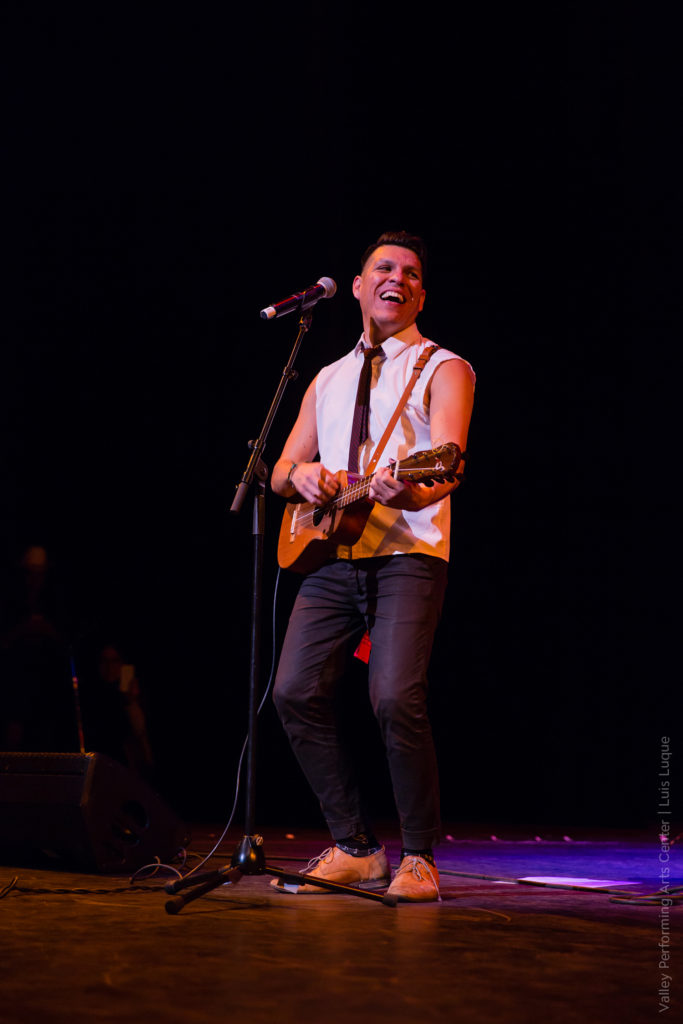 The giant screen behind him, which has been showing black and white pictures of 1920’s farm workers, run down housing and “No Mexicans or Negros” signs exploded into color with film of Mexican dancers in the plaza while the full band strode on stage and let loose with “El Siquisiri”, the traditional fandango from Veracruz. The traveling musical theater-cum- history-lesson was off and running – or more to the point, dancing.  Within seconds, Las Cafeteras’s tag-team front persons Hector Flores and Denise Carlos had the near- capacity crowd up on their feet and clapping to the ribald “El Chuchumbre” as the giant screen images gave way to the Las Cafeteras’ humming bird logo. The clapping continued as Hector mounted the Tarima and danced the zapateado – a tap-like dance on a  wooden platform used to amplify the percussion  in the Veracruz-based son jarocho music that is central to Las Cafeteras.

The personal connection with the audience thick and authentic.  From Hector’s Flores’ introducing a song by telling us about his past and how it reminded him of his deceased father, to the Ballet Folklorico dancing in the aisles with the audience, there was seldom a fourth wall.  The performance was truly community.  This is the essence of Las Cafeteras, an extended community, playing the indigenous son jarocho music – with rock and rap and pop thrown in – using the traditional instruments like jarana’s, requinto, a donkey jawbone, a West African bass instrument called the Marimbol, the seated box drum  the cajón, and the Tarima combined with  guitars and drum kits and even a cello for a unique East LA sound.  Like their message, Yo No Creo Fronteras, their music knows no borders. 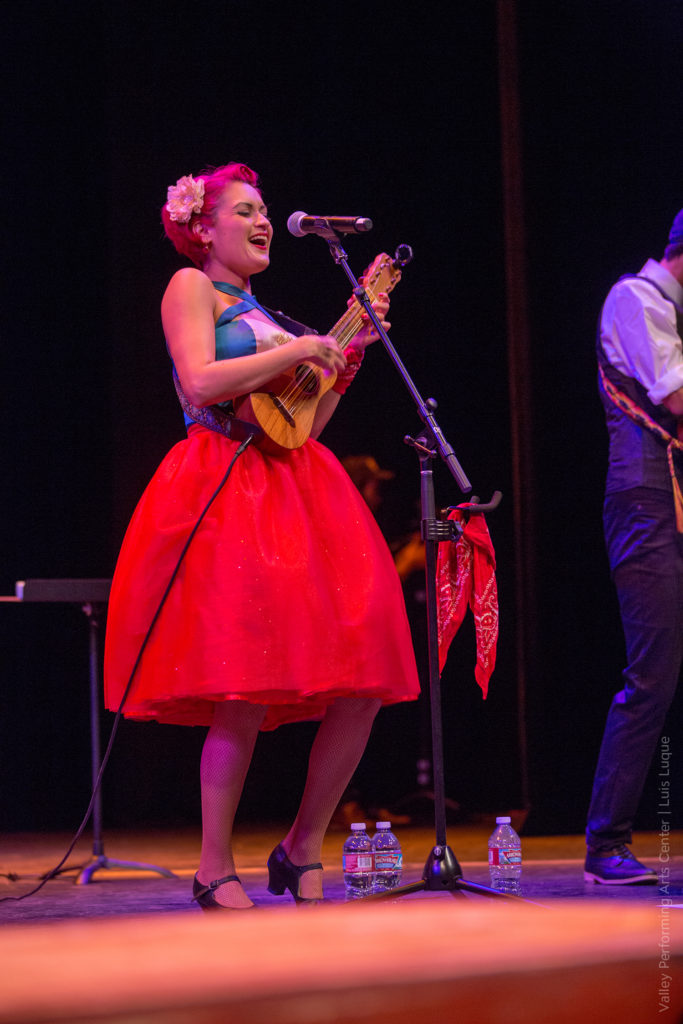 Las Cafeteras rapidly moved on to “Café Con Pan”  and “Colas” and were joined onstage by the Ballet Folklorico of Los Angeles and the multi-lingual LA-based Contra-Tiempo Dance group, all choreographed by Marina Magalhães, winner of La Weekly’s Theater Award for Best Choreography. The dancing, accompanied by slides on the movie screen to establish the location – a plaza, downtown Los Angeles, East LA – was expertly woven into the music and the flowing narrative behind the music, as was the migration story/poetry/rap of Indian-born poet/rapper SETI X who joined the group and finished the first set with activist artist Damon Turner and the band performing “Trabajadora”.

For two hours Las Cafeteras played, danced, talked, told stories, clapped and sang with the audience, danced the zapateado – including to the song “El Zapateado”,  and turned the magnificent Valley Performing Center alternately into old Mexico, Los Angeles of the past and future, a classroom and a theater-scale art gallery. This was their home turf;  stories, music, dance and history. Las Cafeteras are the children of immigrants who came together on the streets of Los Angles to remix roots music and modern day stories in a mashup of son jarocho, hip hop, punk, rock and cumbia.  They met while taking classes at the Eastside Café, a Zapatista-inspired community space in East LA where they learned the music and culture of son jarcho.  (Many band members went on to obtain Bachelors, Masters and PhD  degrees).  Their debut album, It’s Time, has garnered rave reviews and netted them features on the BBC, NPR, and in the LA Times. 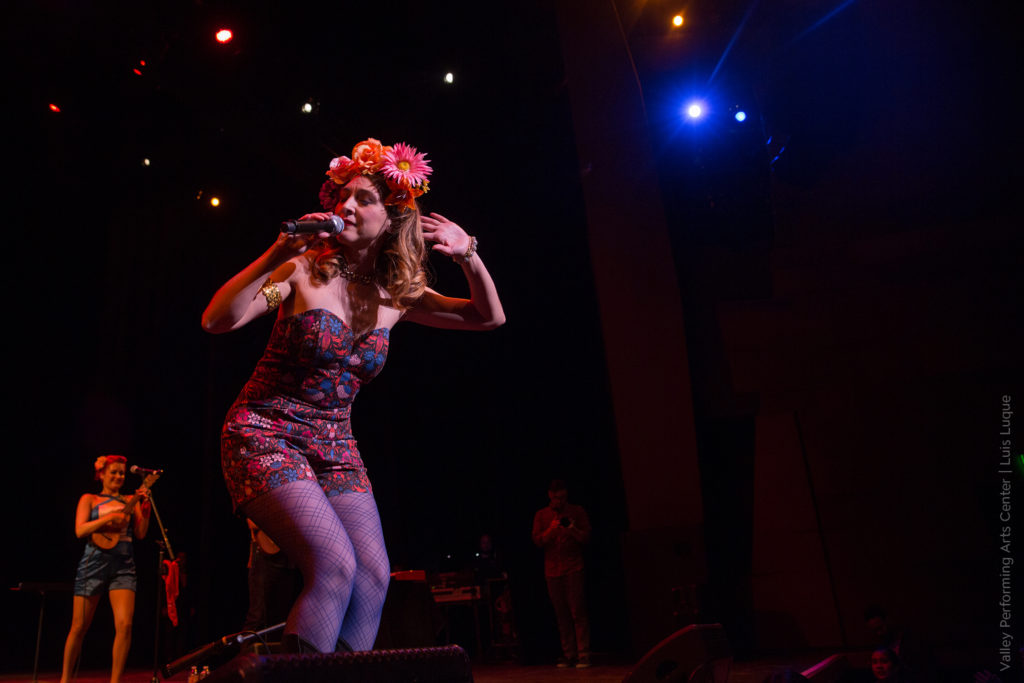 This eclectic combination of music forms and narratives was especially evident in their performance of Woody Guthrie’s iconic “This Land is Your Land” in the second set, started in American style by Maria Del Pilar and then transformed into Mexican dance with the arrival of Ballet Folklorico in western garb – checked skirts, boots, jeans, cowboy hats – framed by an image of the native Americas who lived here before the Spanish arrived.  As the dancers spun and do-si-doed in a American barn dance, Denise Carlos – glowing in bright red hair and red white and blue shorts and top, danced and sang with cowboys and proclaimed “This Land was meant for you and me”.

Las Cafeteras performed 20 songs in two acts and an encore, with multiple costume changes, films, slides and dance numbers, each with a message and a story.  Some were in Spanish, some in English; most of the narrative and poetry was in English, which worked well with the mostly Latino bilingual audience that filled the theater.  Highlights are too many to list, but a few include a call-answer duet by Maria del Pilar and Denise Carlos supporting a sensuous traditional dance by Contra-Tiempo group, duel zapateado dancing by Hector and Denise, Johnny Cash’s famous “Ring of Fire” by Maria del Pilar, an apropos Presidente”, the playful and hooky “Luna Lovers”, the moving spoken word “Brown”  by Hector Flores, and 1700 people on their feet singing “La Bamba Rebelde” during the finale with everyone on stage.

In a time when some are trying to use walls, hate and stereotypes to destroy the “E Pluribus Unum” that built this nation, Las Cafeteras are using music and dancing and joy and history to make the “Unum” stronger. America’s strength has always been the constant flow of new people, new ideas, new energy that comes from immigration.  Las Cafeteras are both an example of that new energy and its best proponent. Once you see them, you will understand  that Las Cafeteras  are not only an LA icon, they are  a national treasure. 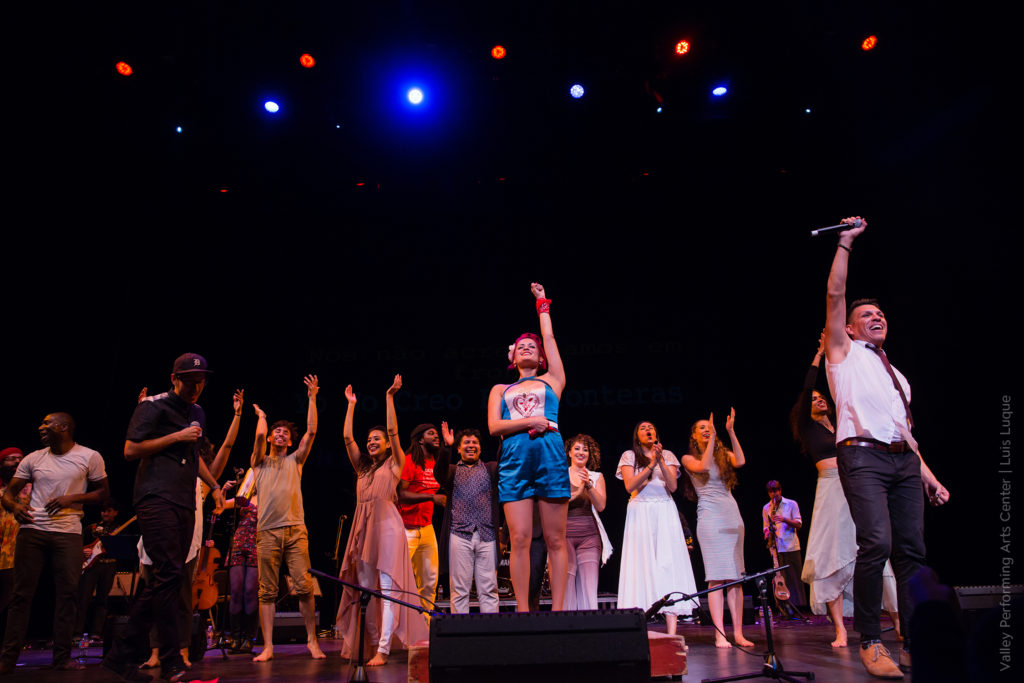