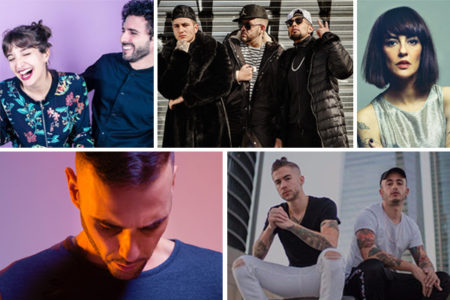 Sounds from Spain is returning to the LAMC and is giving us a taste of some of the country’s brightest musical acts. Joining us at the LAMC this year are Fyahbwoy, Natos y Waor, Vega, Delaporte, and Moncho Chavea at the Highline Ballroom on Wednesday, July 11th.

Sounds from Spain made its LAMC debut two years ago to rave reviews from outlets like Billboard, Paste, KCRW, EFE, and Fox News Latino among many others. This year’s showcase promises to once again highlight Spain’s strong music scene with a lineup featuring some of the country’s up-and-coming, as well as more established, talent in a variety of genres.

In addition to the showcase, Sounds from Spain will once again be at the LAMC conference site at the Stewart Hotel to interact with LAMC conference attendees.
Stop by and say “hola!” to them and other Spanish music insiders who will be joining them this year!

The Latin Alternative Music Conference (LAMC) returns this summer from July 10th-14th, boasting dynamic panels, powerhouse showcases, and wide range of events dedicated to entertainment. With past conferences averaging more than 1,250 music industry attendees and 25,000 concert fans, this LAMC promises to be yet another exciting year.

Conference Registration and Discounted Hotel is Now Open at LatinAlternative.com