As praised by NBC News, La Santa Cecilia’s upcoming visual album “Amar y Vivir” is  “A Love Letter To Latin Culture… a cultural – and musical – bridge between the United States and Mexico”

Set for release on May 12, the heartfelt project is a tribute to both the Los Angeles GRAMMY winning band’s Mexican roots and early start as street performers. With live performances filmed and recorded at significant locations across Mexico City, the audiovisual album documents La Santa Cecilia paying homage to some of the greatest Latin American songwriters of our time. 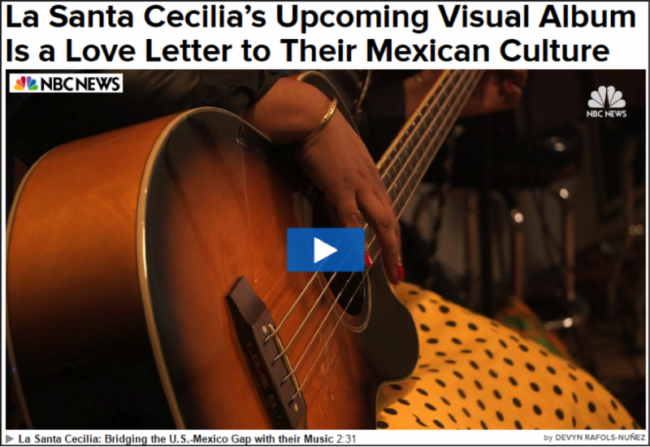 “Known for their eclectic blending of Latin classics, American rock and Mexican folk music, La Santa Cecilia will soon be releasing their new visual album, ‘Amar y Vivir.’ Recorded live in the historic center of Mexico City, “Amar y Vivir” is a love letter to their Latin culture. A journey into the band’s roots, it features traditional boleros, huapangos, jarocho, bossa nova, cumbers, rancheras, pop and rock. Covering songs from José Alfredo Jimenez, Chavela Vargas to Café Tacvba, the band ventured the streets, nightclubs and park squares that inspired these classic songs, while also finding the common thread in American culture….They expressed hope that their music can change the political and social conversation and the importance of humanizing those most affected by constantly changing immigration policies and deportations. They also hope they can be a cultural – and musical – bridge between the United States and Mexico.” – NBC News

Ahead Of The Album’s May 12th Arrival, La Santa Cecilia
Has Already Premiered The Film Trailer And First Two Singles“Amar y Vivir” and “Leña de Pirul” –

Amar y Vivir – translated “Love and Live” – is the first installment from their upcoming project, also entitled “Amar y Vivir,” that takes you on a journey through the band’s Mexican roots with an unforgettable live experience. The entire album is jam packed with covers from some of the greatest Latin American songwriters of our time.

Title track Amar Y Vivir is a song originally made popular by Consuelo Velázquez, one of Mexico’s best-known composers who wrote the ageless standard and famous bolero,”Besame Mucho.” La Santa Cecilia recorded their version of the song at “El Imperial” LIVE in Mexico City, which harkens back to romantic clubs from the 30’s and 40’s.

Leña de Pirul was originally written by Tomas Mendez, a famous ranchera singer-songwriter and reached a new generation when Banda Machos recorded a new version. La Santa Cecilia recorded the song on a side street leading up to the famous Plaza Santo Domingo in Mexico City. This song is the embodiment teenage nostalgia for many first generation Latino millennials in the US. 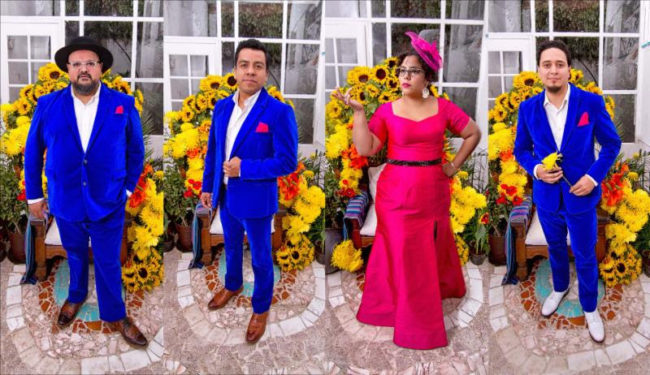 “La Santa Cecilia journeys into the heart of Mexico for what might be its greatest adventure yet: recording a gorgeous new visual album, Amar y Vivir. Ditching the studio to record at 12 different locations in and around Mexico City, the band captures the spirit of the music in its natural habitat. Its members pay tribute to Mexican culture with the traditional sounds of boleros and rancheras, while subtly blending their American influences into the songs. In the album’s title track, vocalist La Marisoul puts listeners into a romantic trance with her slow-tempo interpretation of a timeless bolero. ..she makes this love song her own with her deep, alto voice and certain personal touches, like the hint of a raspy growl and a bluesy finish. But the real emotional impact of this version of “Amar y Vivir” comes from a perfect marriage between La Marisoul’s voice and passionate classical-guitar leads and accents, all laid over atmospheric electric guitar supplied by the Mexican rock band Comisario Pantera. The congas and upright bass highlight the traditional bolero rhythm. Both the music and the visuals are stunning, and we can’t wait to hear – no, make that see – the rest of the visual album” – NPR Music, SONGS WE LOVE