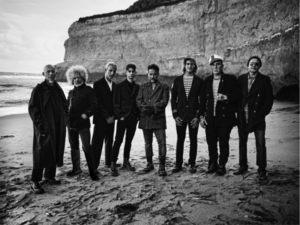 Legendary Argentinian band LOS FABULOSOS CADILLACS, in conjunction with Goldenvoice, returns to American stages to present their successful world tour ‘La Salvación de Solo y Juan’. The announcement comes after the epic night the band had at the Latin GRAMMYS where they received two awards in the Best Rock Album and Best rock Song categories for the album that shares the tour’s name.

The band ended their amazing night at the Latin GRAMMY’s in Las Vegas with a spectacular livemedley performance of their hits “El Rey Del Swing” and “Matador”, songs that they performed with their characteristic energy and rhythm in a special collaboration with their own sons, who joined the band to play the guitar and drums. The show was without a doubt an exciting hint of what their fans can expect during the visit to the North American country.

Ticket presale begins on Thursday December 1st from 10:00 am to 10:00 pm using code Cadillacs. General ticket on sale will begin on Friday December 2nd at 10:00 am PST.

More than 500,000 fans have already witnessed ‘La Salvación de Solo y Juan’ tour in countries like México, Chile, Costa Rica y Ecuador, including a successful appearance last July at the Ruido Fest in Chicago. The band will close 2016 with visits to Colombia and Peru, and the tour will continue next year with stops in the United States and Europe.

‘La Salvación de Solo y Juan’ is a critically acclaimed ‘Rock Opera’ concept album that takes the listener on a 14 song journey through the history of the Clementi brothers. Written by Vicentico and Flavio Cianciarulo, the record was produced by Héctor Castillo, the household name that worked with Gustavo Cerati and David Bowie amongst others.  The album sets the return of Los Fabulosos Cadillacs to the stages after a two years absence in Buenos Aires.