Gypset Magazine is giving away TICKETS to LA MALA RODRIGUEZ at EL REY THEATRE on May 21, 2015 Courtesy of Goldenvoice 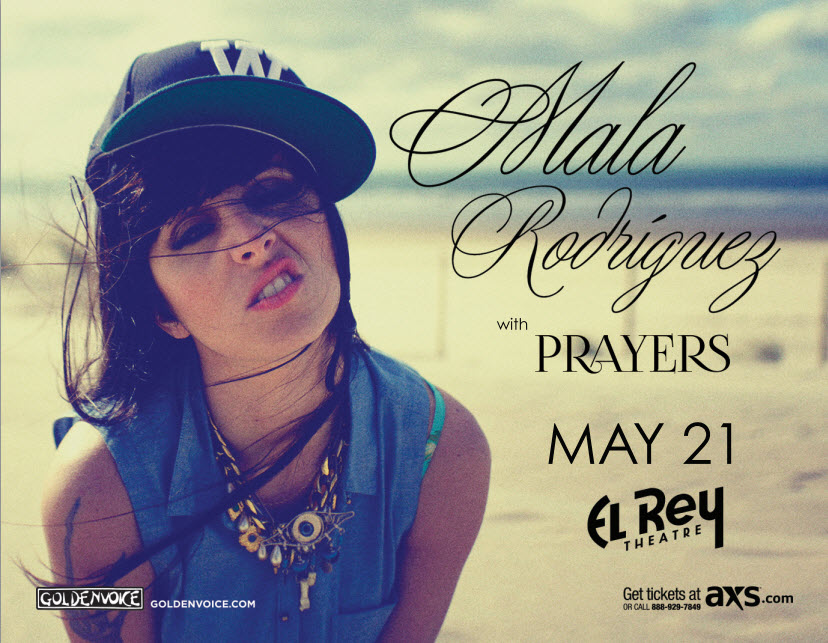 Spanish rap star Mala Rodríguez rose to fame quickly, working with some of Spain’s top hip-hop producers and earning plenty of attention with her socially minded lyrics and strong femininity. She arose from the fertile hip-hop scene of Seville during the late ’90s — known then as La Mala, an indication of the hardcore nature of her early work — and she relocated to Madrid once her career prospects appeared promising. Her debut album, Lujo Ibérico (2000), released by Universal, established her immediately as one of Spain’s more notable rappers. The album included production work by Jota Mayúscula, Supernafamacho, and Dive Dibosso, who are among Spain’s top beat-makers, and spawned the popular song “Yo Marco el Minuto,” which was featured in the well-known film Lucía y el Sexo (2002). Her notoriety was cemented when the video for “La Niña,” a single from her second album, Alevosía (2003), was banned from Spanish TV because of its depiction of a drug-dealing young girl. In time, Rodríguez lightened up her music somewhat and began experimenting with new sounds; however, she remained a potent rapper and thoughtful lyricist, and with the broadening of her music came an increased international appeal.

Born María Rodríguez Garrido in Jerez de la Frontera, Cádiz, Spain, on February 13, 1979, she grew up in Seville and became involved with the city’s thriving hip-hop scene as a teenager. In the late ’90s she rose to prominence alongside fellow Sevillian hip-hop acts La Gota Que Colma, SFDK, and La Alta Escuela. Then billed as La Mala, she appeared on La Gota Que Colma’s album Mordiendo el Micro (“No Hay Rebaja,” “Dando Guerra”), released by Zeroporsiento in 1998; SFDK’s Siempre Fuertes (“Una de Piratas”), released by Zona Bruta in 1999; and La Alta Escuela’s En Pie de Vuelo (“Espectáculo en la Gancha”), released by Flow Records in 1999. Most notably, she made her solo debut with A Jierro/Toma la Traca, a maxi-single released by Zona Bruta in 1999 (originally planned for release by Zeroporsiento, a Sevillian label for which she’d recorded the tracks). The following year Rodríguez switched to Yo Gano/Superego, a joint label headed by impresario Sergio Aguilar Pereira and based in Madrid, to which she’d moved at age 19. Now billing herself as Mala Rodríguez, in early to mid-2000 she released two further maxi-singles, Yo Marco el Minuto/Tambalea and Tengo un Trato, and appeared on noted Spanish hip-hop producer Jota Mayúscula’s album Hombre Negro, Soltero, Busca (“Tirititi Tirititero”).

Universal Music Spain was the next label to offer Rodríguez a recording contract, striking a deal with Yo Gano/Superego to release her debut full-length album, Lujo Ibérico, in 2000. Featuring production by Mayúscula, Supernafamacho, and Dive Dibosso, Lujo Ibérico made quite a splash, selling over 50,000 copies and earning gold status. “Yo Marco el Minuto” in turn was featured in Lucía y el Sexo, a popular Spanish film released in 2001 (the soundtrack was released in 2002 by Palm Pictures), while “Afila el Colmillo,” a collaboration with Titan, was featured on the Y Tu Mamá También (2002) soundtrack. For her second album, Alevosía (2003), Rodríguez collaborated with the same producers from her debut — Mayúscula, Supernafamacho, Dive Dibosso — while over half the tracks featured guests (e.g., Kamikaze, Giggi Mantequilla, Kultama). Universal also released La Niña/Amor y Respeto (2003), a 13-track maxi-single loaded with versions of the co-featured songs, along with previously released songs such as “Yo Marco el Minuto” and “Tengo un Trato.” In particular, “La Niña” caused a stir; released as a single, its video was controversial, banned from Spanish TV because it featured a drug-dealing young girl. Alevosía matched the success of its predecessor, going gold.

It would be three years before Rodríguez released her next album via Universal, Malamarismo (2007), during which time she kept busy. Collaborations were numerous, including ones with Mayúscula (“Como un Titere,” 2004), R de Rumba (“Fabricante,” 2004), Full Nelson (“La Carta,” 2005), Akon (“Locked Up [Remix],” 2005), Vico C (“Vamonos Po’ Encima,” 2005), Kultama (“Nacional e Importación,” 2006), Antonio Carmona (“Ay de Ti,” 2006), and Calle 13 (“Mala Suerte con el 13,” 2007). In 2006, the Spanish film Yo Soy la Juani featured “Por la Noche,” a new Rodríguez solo recording, produced by Supernafamacho. A maxi-single was released in conjunction, including several versions of the song as well as a music video. Led by the single “Nanai,” Malamarismo followed in 2007, including “Por la Noche” as a bonus track. Relative to past releases, Malamarismo is diverse; rather than feature straightforward hip-hop, the album finds Rodríguez taking some chances stylistically, including collaborations with Mexican pop star Julieta Venegas, Puerto Rican reggaetonero Tego Calderón, and Solo los Solo producer Griffi, among others.