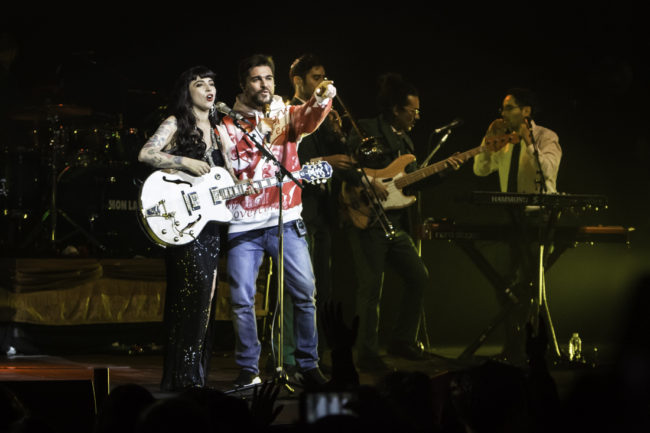 Juanes and Mon Laferte brought their Amarte Tour performances to the Hulu Theater at Madison Square Garden in Manhattan and delighted their adoring audience with an absolutely phenomenal concert. The natural chemistry these talented musicians shared on “Amarrame”, the duet track featured in Mon Laferte’s latest album “La Trenza”, easily translated into a very dynamic and passionate one-two punch of a stage show. 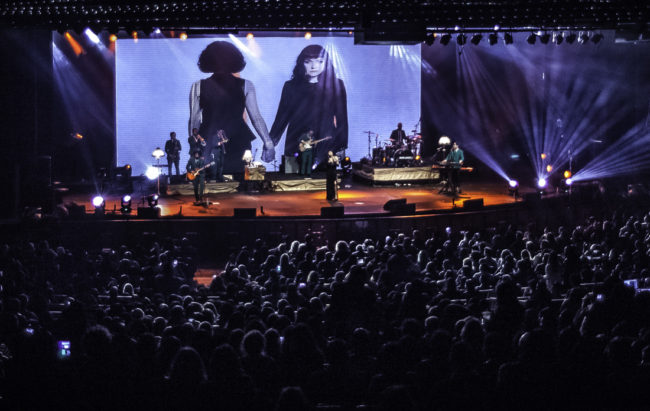 Mon Laferte, who’s greatly admired talent has earned her a well-deserved meteoric rise in popularity, kicked her set off at approximately 8:00 PM and immediately set the romantic mood in the theater with a passion filled bolero titled “Antes de Ti”. Then, backed by her impeccably dressed seven piece band, the Chilean born songstress delivered a rock solid twelve songs set that included hits like “Si Tu Me Quisieras”, “Flor de Amapola”, “Tormento”, and “Tu Falta de Querer” among them. On the next to last song of her set, Mon brought the crowd to their feet by asking Juanes to join her on stage for a live rendition of “Amárrame”. Everybody was dancing and waving their hands in the air, the party was in full swing. 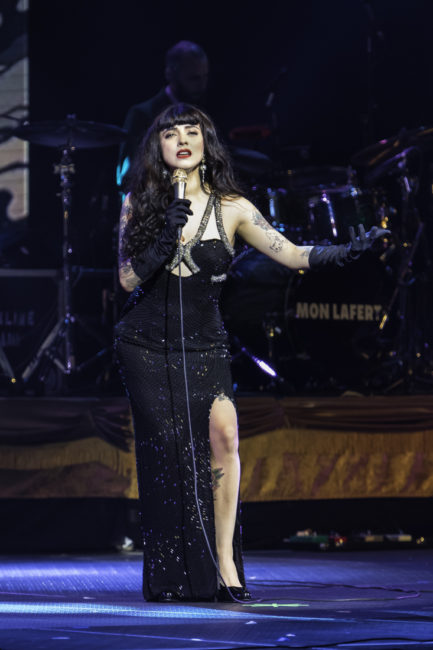 Juanes, the “Amarte Tour” headliner, began his set at approximately 9:00 PM and his mere presence on stage turned up the level of excitement in the room by more than a few degrees. With his characteristic Fender Strat in hand, Medellin’s native son fronted a well-polished quartet of very talented musicians. Like a well-timed groove machine, they seamlessly worked their way through a vast repertoire of songs that spanned the length of his career. The setlist included crowd favorite tunes like “A Dios Le Pido”, “Fotografía”, “Es Tarde”, “Ángel”, “Me Enamora”, and “La Camisa Negra” to name a few.

The sparse and uncluttered stage layout provided ample space for Juanes to freely move from one side of the stage to the other to interact with his fans, it allowed him to stay in close proximity with the audience and create an intimate dialogue. However, the presentation was not a simple exercise in minimalism, because the entire performance was set against a perfectly synchronized backdrop of videos and visual presentations reflected on a wide screen.

In what can only be described as an honest, humble, and admirable move that demonstrates how grounded he is as person or artist. Juanes turned a wonderful performance and made it outstanding when he paid homage to Joe Arroyo, Gustavo Cerati / Soda Stereo, and Juan Gabriel by singing “La Noche”, “Cuando Pase el Temblor” and “Querida” respectively. Seeing everyone in the audience on their feet singing along with him on songs that are so deeply rooted in our culture was simply riveting. Juanes clearly brings people together with his music and people love him for it.

Amarte Tour will continue through May and June with shows scheduled in California, Texas, Puerto Rico, and Dominican Republic. Visit www.juanes.net/tour/ for more details.