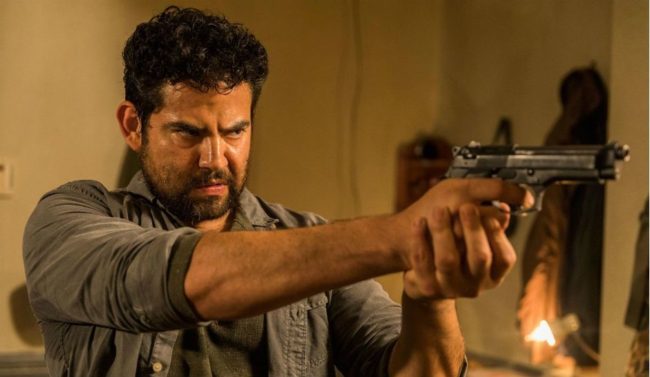 AMC’s hit series The Walking Dead(TWD) is known for being actioned packed and full of truly unexpected surprises. Season 8 has not been the exception. Over the years there has been a lot of speculation that Morales (played by Juan Gabriel Pareja) would return to TWD. Finally, after seven years, Morales, who had departed to Birmingham Alabama instead of heading to the CDC (Center of Disease Control) in the first season, reappeared as one of the Saviors holding a gun to Rick. Gypset talked to, Juan Gabriel Pareja, about coming back to this iconic show after so many years, his sudden departure, and what’s next for this talented latino actor.

After so many years, how was it to get the call about coming back on the show?
It was awesome. I’ve been tickled by the yearly speculation of Morales’ return, which was such an interesting and intriguing possibility. I had always hoped that he’d come back. I thought that it might be something that could happen closer to the original airing of the first season, but the more years progressed, that possibility seemed to get further and further away and just less likely. So earlier this year when we got the call that there might be a possibility I was a little surprised, but also very excited. Of course, nothing was confirmed for a couple of months, but I just started getting in shape because I wanted to be in fighting form, just in case, because I was really hopeful that it would come about. It was amazing for this to have finally come to fruition.

From the first season to this now the eighth season a lot has happened and a lot has changed, including Morales. When you finally got the script, what did you feel about Morales whereabouts and how was it getting back into character?
Yes, so much changed that I feel that it was like almost playing a whole new character. There was no real way or time to prepare for the transition Morales had gone through in these seven years. To be honest, when I first got the script I was a little disappointed because I was so optimistic that Morales was going to have a more integral dynamic and participation in moving Rick’s group and goals forward. So, it was an interesting surprise, and adjustment, when I got the material and saw the direction in which the writers were going. But, it was still exciting to have the opportunity to come back and deliver and intense performance and answer the question brewing over the year of what happened to Morales. It was an incredible and fun experience overall!

How was it to getting back on the set and working with old and new cast members?
Remarkable. Everyone was so welcoming. It was great to see so many familiar faces in production and some of the cast, like Andy Lincoln who is just so nice, and Norma who was so warm and receptive. Unfortunately, I didn’t get to reconnect with many of the other cast members, like Melissa and Chandler, because of the nature of the script and the way they were shooting.

Are you a fan of the show and where do you see the storyline of TWD going?
I am a big fan of the show. I have continued to watch throughout the years, and like everyone else I was so bummed out to see so many of these beloved characters get transitioned out of the show and meet their gruesome ends, like Glen and Abraham. But there’s so much more material to cover from Robert Kirkman’s graphic novel that there still plenty of excitement left. Fans should expect to continue being riveted by the show for some time. I am curious to find out what will happen with Morgan’s character and seeing a little bit of that back story. And maybe even learning more and exploring the backstories of other characters like Abraham, maybe even Morales, who knows.

Why did you get into acting and what type of roles are you drawn to? Do you have a favorite?
I pursued acting because I wanted to do something that was fun, interesting, wouldn’t feel like work. I had a very naïve optimism that I could make it as an actor, so I decided to go to NYU’s Tish for college and I just loved it!
I love challenging work, so characters that make me reach and that are interesting are the ones I am most drawn to. I like the idea of doing edgy work that impacts people and perhaps shifts their perspectives. This year was the first time I played a comedic role and really enjoyed it, so I would like to do more comedy. One day I hope to have a role that will incorporate more of my many passions like dancing, singing… A character that will be the creative outlet that showcase all these hidden talents I have bottled up inside me.
I’m just so fortunate that I get paid to make believe and tell stories. I am grateful for every role that I’ve had; however, Morale holds a special place in heart, because it was an amazing opportunity to play that role and have been able to contribute to a show that has become such a cultural phenomenon.

How did you first become involved with The Walking Dead?
After college, I went back to Texas and actually started booking gigs in Houston, Austin, and Louisiana like W and the Mist. Many years later, when I finally decided to come to Los Angeles, I got a call from my agent saying that Frank Darabont had seen me in the Mist and thought that I would be great for a new show he was creating. So, I sent in an audition tape and the rest is history.

What other exciting projects have you been involved with recently?
I had five episodes on Amazon’s “Goliath” with Billy Bob Thornton, which was a lot of fun. I had my first comedic role opposite Charlie Sheen, Leah Remini and Tiffany Haddish on “Mad Families” this year; that was really great. Early next year, I believe on January 15th, I will be appearing on Chicago Med; that was also really enjoyable. I have been doing some voice overs as well. I recently did one for a video game that is coming out in 2018 called State of Decay 2. And I am looking forward to 2018 and hope it will bring many interesting projects that I look forward to sharing will all of you!