Miami-born songstress Jackie Blue has been wowing audiences with her seductive vocals and unique mix of electronic pop, indie, folk, blues with hip hop beats, since the first time she hit the stage in 2015. Now 20 years old, the singer-songwriter released the music video for her debut single “Baby Blue” today. Produced by the two time Latin-Grammy nominated artist Marthin Chan and mixed by Latin Grammy winner engineer Frank “El Medico” Rodriguez.  The EP will be released on Rex Records /KiimKoo Distributed by Sony Music Entertainment US Latin LLC and the single is part her upcoming debut EP “Puberty Blues”.

Jackie Blue’s lyrics tell poignant stories of love and angst in a millennial’s world. In “Baby Blue,” she yearns for the warmth and compassion of a past relationship that now “slowly fades into the blue”. Paired with soulful vocals ranging from intimate whispers to powerful outpourings, the new single takes the listener on an emotional ride through Blue’s memories. In the music video, which was directed by the Latin American avant-garde filmmaker Milcho, her feelings of solitude are magnified by the visual of her wondering alone in an eerie landscape filled with blue smoke and water.

Currently residing in Miami, Florida. Jackie discovered her love for singing and song writing at the age of 15, and she has been working tirelessly on her craft ever since. She will be celebrating the release of her debut EP with a performance in Mexico City, where she is confirmed for a promotional tour and to perform 5 shows this month. The shows will take place at. 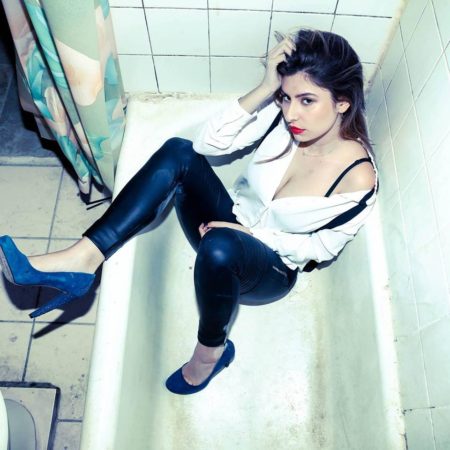