Irene Diaz premieres “This Cannot Be”: a new standard for songs from our most desired and dangerous emotion.

The line stretched out long before 7:30 pm, starting at the locked door of a non-descriptive office building on a ready-to-gentrify section of South Broadway in Los Angeles.  They came from all over the sprawling city and far beyond:  downtown, EastLos, Mt. Washington, the Valley, Hollywood, Pasadena, Santa Monica, Boyle Heights, Pacific Palisades, Koreatown, Orange Country, Long Beach.  One woman drove the 130-mile round trip from Santa Paula with her 6 year old daughter; another came up from San Diego.

There were beaming abuelos and tias,  giggling high schoolers,  hipsters, Latinos, gringos, Asians, African Americans, straight and gay couples and young people still figuring it out.  And many, many children. They clutched tickets that read “Premier of  This Cannot Be.   Next to them on the sidewalk was another line of people with no tickets, hoping to get the few reserved for walk ups. They were all there for the same reason: love. The object and the source of that love was Irene Diaz.

Diaz  sings love songs;  she’s a modern day torch singer-songwriter who, in a very short time, has gained national acclaim. I first saw her in at a Santa Monica church venue about 3 years ago when she was playing in coffee houses and community centers.  It wasn’t long before those gave way to the Troubadour,  the House of Blues and national exposure on NPR.  Her first E.P. “I Love You Madly”,  was a hit with both fans and critics, and her subsequent releases have cemented her place here in the nation’s music capital and in the hearts of the tens of thousands nationwide who stream and buy her songs.

The doors opened, ushering fans into the main soundstage of the Civic Center Studios converted into a music venue for the premier party. Diaz circulated in the growing crowd, hugging old friends and delighting new ones with luminescent smiles and tinkling laughter.  Soon the rows of plastic chairs were filled, the cocktail tables occupied and the crush of people made movement impossible.  They were sold out and more.

After a brief welcome by Qulture Board Member and performance poet Cyn Da Poet (Cynthia Gonzales), Diaz and her musicians stepped onstage – no warm-up band, no introduction, just a smile and a hello as Diaz picked up her guitar and premiered “This Cannot Be”.

This was pure Irene Diaz – she travels in quiet honesty.  Usually the shortest and always the most powerful person in the room, she needs no introduction – her songs do that.

And they did, starting with “This Cannot Be” which carries the weight of love’s joy and pain and places it gently in your ears and your heart.  Drawn from her own experience and, as we saw later, from the experience of one of the two Latinas in the music video,  it tells the story of young love’s elation and the devastation when that love is thwarted by prejudice and ignorance. Diaz’s voice and guitar combined with Carolyn Cardoza’s haunting ukulele delivered an emotional payload that hushed the crowd, even the children.  Diaz’s “This Cannot Be” brings the art of the love song into the 21st century and sets a new standard for the songs of our most desired and dangerous emotion. 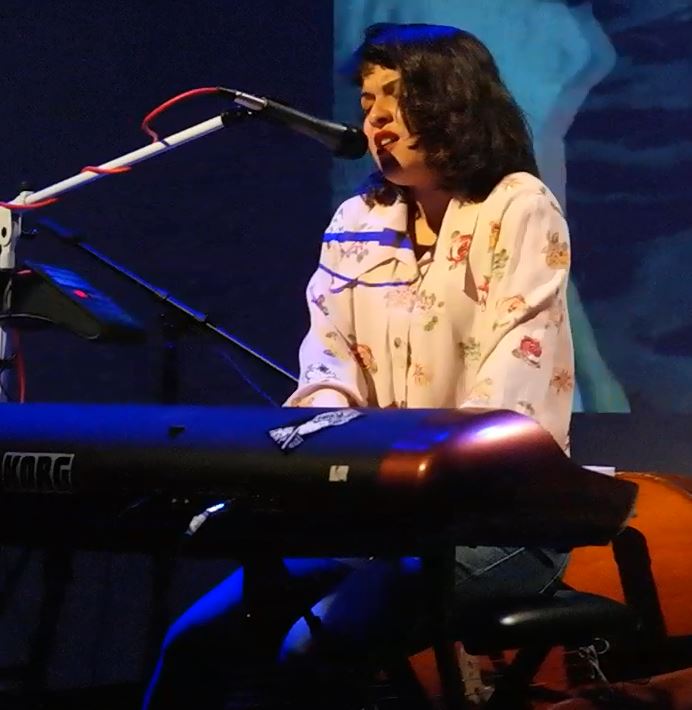 In the eight songs that followed, Diaz and her band – Carolyn Cardoza on ukulele, Bill Markus on upright bass, and Seung Park on Cajon and drums –flowed from the  seductive fun of “Lover’s Sway” to the driving beat of “Frequencies” and the haunting melody of “Untitled Love Song”.  She introduced a new offering, the blues-and soul inflected “Push”, while images of her singing on the beach danced on a giant screen behind the stage. Perhaps a preview of the full album she has promised, “Push” adds another tile to the mosaic of the love experience that is Diaz’s catalogue of songs.

Irene Diaz may have a stunning catalog, but she does not have a label, a publicity consultant, a tour manager or even a roadie.  She just works hard. She studied classical piano for almost two decades, gaining symphony-level chops before hearing the music of Ella Fitzgerald and deciding that love songs were what was inside of her. Her lyrics are sometimes painful, sometimes playful, sometimes blind-lost-in-love romantic.  But they are always honest.  She writes and sings what she feels without regard to trends or market demands.  She does not binge listen to artists she likes to avoid sounding like them.  The result is the she is a unique musical embodiment of love in all of its forms and fallacies.

The video for “This Cannot Be”,  produced by the Elefante Collective, underscored Diaz’s honest embrace of the full consequences of love.  Starting with the fast friendship of two high school Latina’s that developed into romance, only to be thwarted by a father for whom love was only for boys and girls, is both exhilarating and aching to watch. The video, unspoken with only “This Cannot Be” as its soundtrack, takes us through the arc of joy and pain and devastation that so many young people face today as they and their families wrestle with their sexuality, as Diaz did.  Tears dotted the faces of many in the audience, straight and gay, as the video reached its inevitable close. The tears reappeared during the Q&A session with Diaz and the actors and video team that produced the video.

Diaz wrapped the evening with her signature “Crazy Love” and a second showing of the video.  While fans queued up to take selfies with her or pose for Facebook pics with Los Photos interns, many headed to Civic Center Studios’ upstairs lounge. There they chatted with volunteers from Mi Centro, a Boyle Heights-based service center for gay Latinos,  learning that although 56% of Latinos support gay marriage, in many families a son or daughter who comes out can be beaten or expelled.  Mi Centro is a safe space for them.

The crowd that overflowed the Civic Center Studios, and the over half million people who buy and stream Diaz’s music, are more than fans, they are an extended family that Diaz is creating, one love song at a time.  The room had the feel of the audiences for LA’s  La Santa Cecelia at the cusp of their Grammy award and national recognition. Diaz’s fans are not just Latinos — she sings in English; they are not just jazz or blues fans, they are not just local community activists. They are people of every color and age from every zip code.  And they bring children, many little girls in their Irene Diaz t-shirts. What they have in common is their unqualified love for Diaz and the honest love she returns to them in live events and recorded music. The night was a musical valentine to that extended family. The song “This Cannot Be” is another chapter in her book of love – a sad chapter, but one whose telling may end the need for it to be told.

Irene Diaz, Premiere of “This Cannot Be”

“This Cannot Be” available on  itunes and Spotify