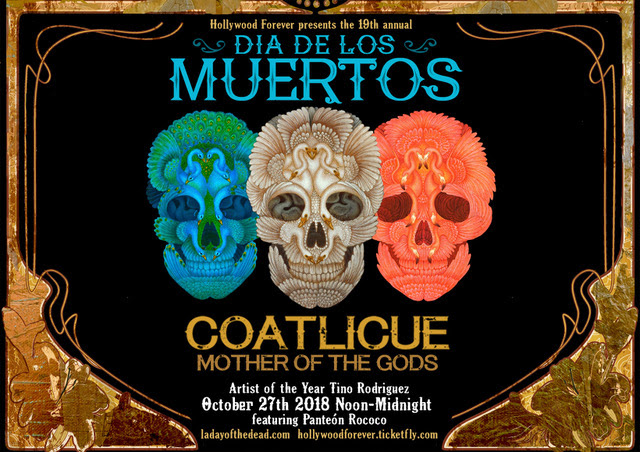 HOLLYWOOD FOREVER’S 19th ANNUAL DAY OF THE DEAD
is proud to announce its artist of the year:

Far away from the sterile, pseudo-sanctified realm of the art museum, Tino Rodriguez gained his first exposure to the art world in the Catholic churches of Mexico. In these mysterious, hushed interiors, images of saints and angels seduced him, the scent of candle wax and incense beguiled him. Angels in particular – androgynous, half animal-half human creatures – captivated Rodriguez with their allure. The legacy of this seduction is visible in Rodriguez’ work.

His fantastic paintings are present postmodern fairy tales. Their mythical qualities stem from childhood legacies. Rodriguez came of age surrounded by the Mexican tradition of oral story telling. His grandmother, family and friends passed on stories as diverse as La Llorona, Little Riding Hood, and tales of the Brothers Grimm, as well as Aztec & Mayan myths. In his paintings such different cultural influences now commingle with art historical references, Hindu deities and allusions to the contemporary world.

“I am filled with joy to have been invited to this beautiful, pre-hispanic, pagan celebration in which we celebrate the life within the death. Death is such a universal theme and has always been part of our Mexican culture ( And many other cultures in the world). This is a time in which we wipe away our tears and welcome death into our homes and hearts. Hollywood Forever as been celebrating this beautiful and profound ritual for 19 years and I am happy to be part of their family history in helping them welcome “El Dia de los Muertos”
– Tino on being part of LA Hollywood Forever’s Day of the Dead. 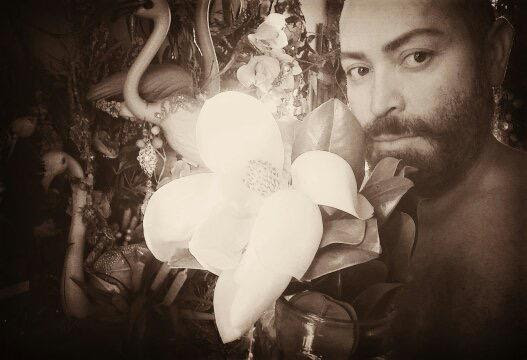 “May the ones we love, hear our incantations and be joyful at our songs and dance, wherever they are.”

Coatlicue (pron. Co-at-li-cu-e) or ‘Serpent Skirt’ was a major deity in the Aztec pantheon and regarded as the earth-mother goddess. Her classical Nahuatl name can be rendered both Cōātlīcue and Cōātl īcue, from cōātl “snake” and īcue “her skirt”, roughly meaning “[she who has] the skirt of snakes”.

In Aztec mythology Coatlicue was a priestess whose job was to maintain the shrine on the top of the legendary sacred mountain Coatepec (‘Snake Mountain’, also spelt Coatepetl). One day, as she was sweeping, a ball of feathers descended from the heavens and when she tucked it into her belt it miraculously impregnated her. The resulting child was none other than the powerful Aztec god of war Huitzilopochtli. However, Coatlicue’s other offspring, her daughter Coyolxauhqui (‘Painted with Bells’ and perhaps representing the Moon), herself a powerful goddess, and her sons the Centzon Huitznahua (‘Four Hundred Huiztnaua’, who represented the stars of the southern sky) were outraged at this shameful episode and they stormed Mt. Coatepec with the intention of killing their dishonoured mother. The plot came unstuck, though, when one of the Huiztnaua lost heart and decided to warn the still unborn Huitzilopochtli. Rising to his mother’s defence the god sprang from the womb fully-grown and fully-armed as an invincible warrior. In In another version the god springs from his mother’s severed neck but either way, with his formidable weapon, the xiuhcoatl (‘Fire Serpent’) which was actually a ray of the sun, the warrior-god swiftly butchered his unruly siblings and chopping up Coyolxauhqui into several large chunks he lobbed the pieces down the mountainside. The myth may also symbolise the daily victory of the Sun (one of Huitzilpochtli’s associations) over the Moon and stars.

Get your tickets at HERE or at: www.ladayofthedead.com