Hispanicize Los Angeles, the west coast’s counterpart to the national Hispanicize Miami conference, is expected to close Hispanic Heritage Month with a gathering of the nation’s most influential Latinx professionals in the Social Media arena for 2.5 days in Century City’s Intercontinental Hotel from October 11-13th. Hispanicize, originally founded in Dallas in 2009, is the largest annual event for Latino trendsetters and newsmakers in digital content creation, journalism, marketing, entertainment and tech entrepreneurship.

Now in its 3rd year, Hispanicize LA expands from one to nearly three days as a result of social influencer and sponsor demand on the west coast for a more in-depth experience. The event will feature the key themes of financial literacy and empowerment, STEM education, diversity and entrepreneurship, tech innovations, community leadership and Latina motivation. Hispanicize LA offers top influencers, communications professionals and senior-level college students a networking event to hear the latest in virtual trends, connect with sponsors, collaborate with likeminded creators and advance their skillsets through professionally led industry sessions such as What’s New in Digital Trends, or Producing Viral Videos Like A Boss, among many others.

“Our programming in Los Angeles aims to address the lack of diversity and inclusion in the creator industry that is often overlooked by big conferences,” said Katherine Johnson-Gunn, co-founder and Managing Partner of Programming, Hispanicize Events. “Inspiring our community and future leaders including students, Latinas and influencers is central to our goals for Hispanicize events and our brand partners who present unique programs catered for our audience,” said Cristy Clavijo-Kish, co-founder and Managing Partner of Partnerships, Hispanicize Events.

“It is impossible to overestimate the importance of the Hispanic consumer, especially as we continue to expand our work to help put financial security within reach for everyone,” said Dorinda Walker, VP of multicultural markets for Prudential Financial. 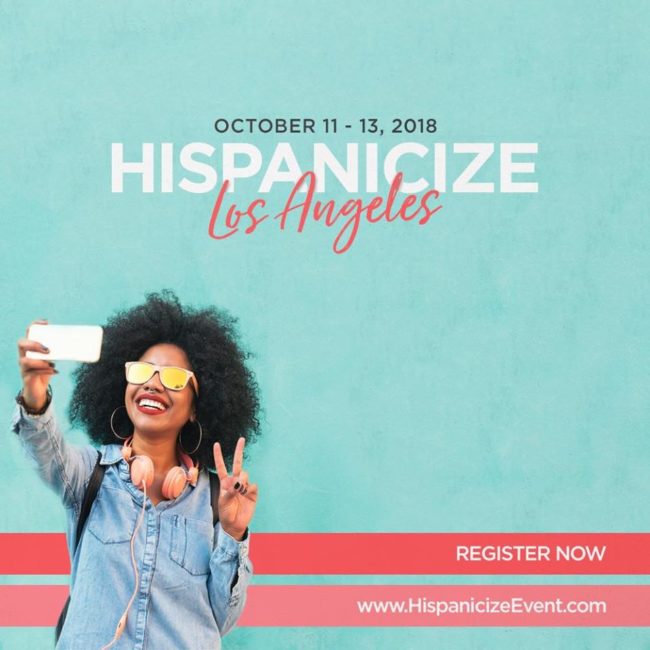 The Hispanicize LA conference caters to Latinx influencers and trendsetters across many different spaces and a wide variety of interests and relevant issues for Hispanics today. These include:

Now in its 9th year, Hispanicize 2018 (#HispzLA) is the largest annual event for Latino trendsetters and newsmakers in digital content creation, journalism, marketing, entertainment and tech entrepreneurship. The events held in Miami (Spring) and Los Angeles (Fall) are a launch pad for creative endeavors, new products, technologies, marketing campaigns, films, books, music and more targeting Latinos in the U.S. and/or Puerto Rico.  The Hispanic Heritage Month edition in LA, presented by Prudential, is expected to attract more than 700 attendees with a combination of industry professionals, senior-level college students and for the first time Latino consumers on Saturday when the agenda is opened for popular influencer Meet & Greets. The Hispanicize event is owned and operated by HMG, a multi-platform media company for multicultural Millennials and Generation Z.