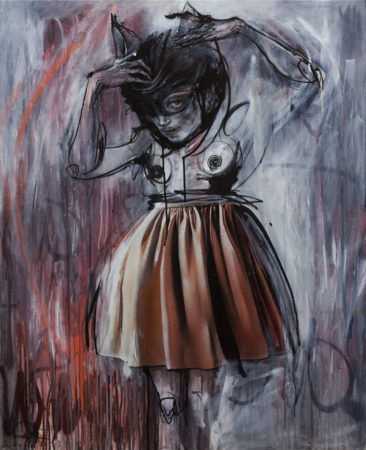 Regarding their newest creations, HERAKUT states: “The show is called ‘Rental Asylum’ — as we all need to rent a place somewhere far from today’s actual reality, don’t we? And all our creatures on canvas are the happy patients of our rental asylum. They all have different reasons for checking in with us, for a bit, before facing the shit show our world has become.” 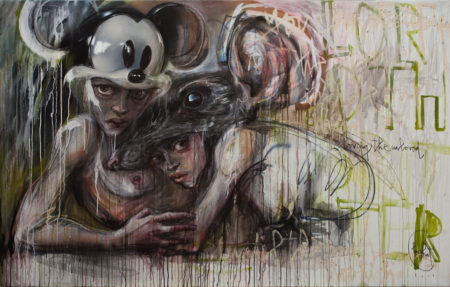 After joining forces in 2004, the artists merged their names and styles to collaborate as HERAKUT. Since then, the duo have been painting murals all over the world, along with additional works on canvas, paper and film for gallery and museum shows. Beyond international exhibitions around the world (France, Gaza, Germany and Jordan, among many others), live festival showings at Glastonbury (U.K.), Coachella (U.S.) and an appearance at the Happy 80th Birthday, Dalai Lama celebration (U.S.), this marks HERAKUT’s second exhibition at the gallery. 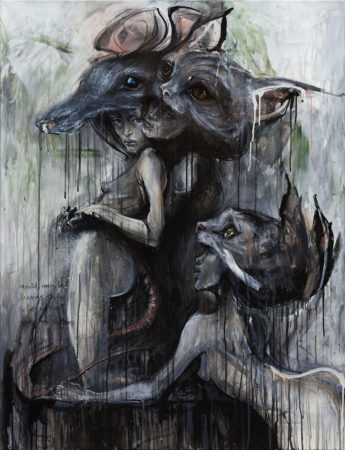 “Would Never Be Leaving Without You”

HERAKUT consider themselves “storytellers” who want to share their thoughts and questions with the public, so their figurative work is always accompanied with text. Their process of painting is also a dialogue with both artists adding their individual techniques to the piece. Jasmin uses her drawing skills on finding the form and proportion of their characters, while Falk specializes on painting the photorealistic elements.

In addition, HERAKUT are also involved with a variety of charity organizations — where the two work with children in schools and youth programs teaching young people to create a world for themselves — inside their minds. A collection of their work can be found in their books HERAKUT – the perfect merge and After The Laughter.

In addition to HERAKUT’s exhibition, Corey Helford Gallery will be premiering new shows from Adrian Cox in Gallery 2 and Troy Brooks in Gallery 3. Opening reception for all three shows will be hosted Saturday, February 24 from 7-11pm. The reception is open to the public and all shows are on view through March 31.

Corey Helford Gallery (CHG) was first established in 2006 by Jan Corey Helford and her husband, television producer and creator, Bruce Helford (Anger Management, The Drew Carey Show, George Lopez, The Oblongs) and has since evolved into one of the premier galleries of New Contemporary art.Its goals as an institution are the support and growth of young and emerging, to well-known and internationally established artists, the production and promotion of their artwork, and the general production of their exhibits, events and projects.

After nine years in Culver City, CHG relocated in December 2015 to a robust 12,000 sq. ft. building in Downtown Los Angeles, seven times larger than its original space, where it continues to host exhibitions within the heart of the city’s art community. The current space boasts three separate galleries, each of which house individual artist and group exhibitions, whereas the main gallery offers 4,500 sq. ft., providing total immersion for its attendees. New exhibitions are presented approximately every four weeks. For more info and an upcoming exhibition schedule, visit CoreyHelfordGallery.com and connect on Facebook, Twitter and Instagram.