Gypset Magazine will take you to MEXRRISSEY : Mexico goes Morrissey at The Regent Theater

Gypset Magazine will take you to MEXRRISSEY : Mexico goes Morrissey at The Regent Theater

Home » Featured » Gypset Magazine will take you to MEXRRISSEY : Mexico goes Morrissey at The Regent Theater 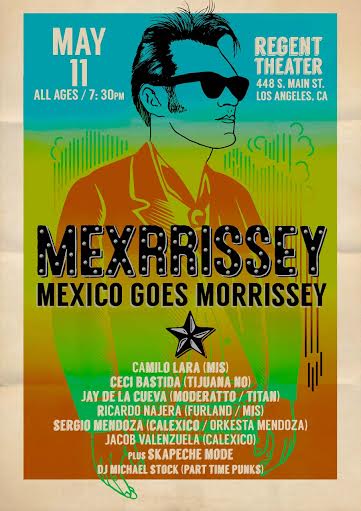 Gypset Magazine will take you to MEXRRISSEY : Mexico goes Morrissey

The “affair” between Mexico and Morrissey runs deep; the British crooner’s songs of love, loss and longing, with powerful imagery and metaphors have found their way into Latin culture since Morrissey’s seminal 80s band The Smiths.

Mexrrissey will be a revolving collective of musicians including Ceci Bastida (Tijuana No!) , Sergio Mendoza (Orkestra Mendoza/Calexico) Camilo Lara (Mexico Institute Of Sound) Alejandro Flores (Cafe Tacuba) plus more. The renditions will add horns and accordions, borrow from cumbias and rancheras to interpret a new sprit into the songs.

MEXRRISSEY was the brainchild of Andy Wood, Director of the La Linea Festival in London who approached Camilo Lara with the initial idea to put together Mexrrissey. Camilo, the force inside Mexican Institute of Sound, brought Sergio Mendoza (Orkesta Mendoza/Calexico) into the mix to bring together the team of musical gunslingers from Mexico’s finest bands.

Camilo says “I think for the people that know the songs, I’m sure that they will be amazed that the songs can go into these directions of cumbia and boleros and sound actually as if they were written in that style..

Camilo adds “We try to get a glimpse of the poetry in Morrissey’s work and to capture the irony, the anger and the happiness at the same time that has been a challenge.”

Tickets will go on sale Saturday, March 7 at 12noon and will be available through Ticketfly.com

The Regent Theater is located at 448 S Main Street and recently opened in Nov 2014. The 900 capacity venue hosts a variety of up and coming music acts, comedy, dance nights and film screenings. It is booked by Spaceland Productions.