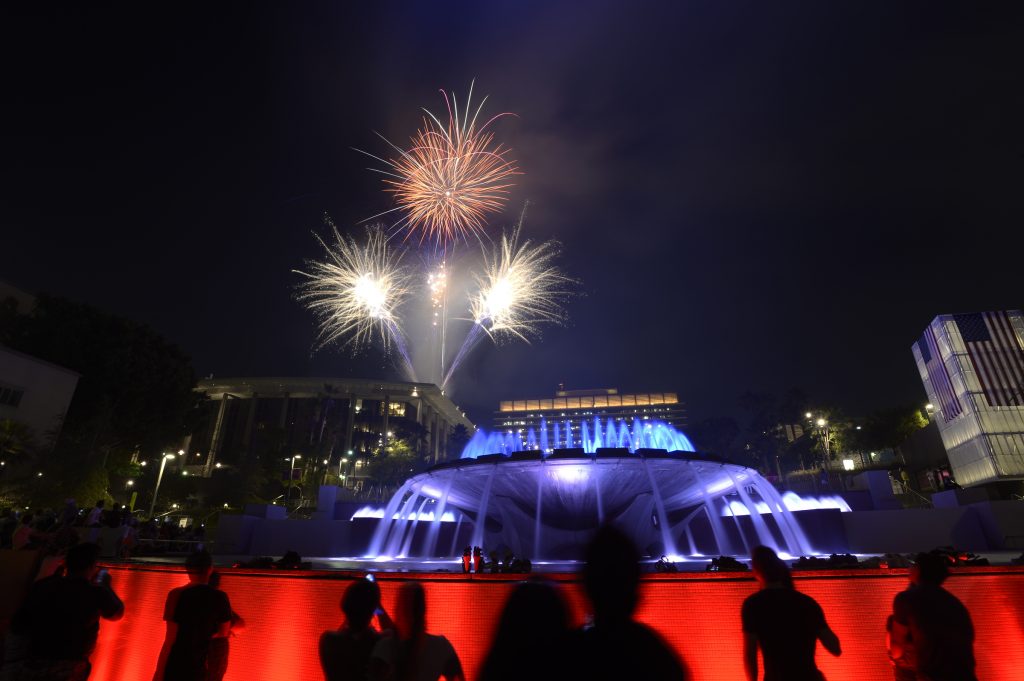 Angelenos will celebrate America L.A.-style with music, dancing, fireworks, food and more at the fourth annual Grand Park + The Music Center’s 4th of July Block Party on Monday, July 4, 2016, from 2:00 p.m. – 9:30 p.m. For the first time, the family-friendly event will include The Music Center Plaza as a site for entertainment and the best viewing location for an all-new fireworks show set to patriotic and contemporary music that will put L.A.’s iconic City Hall in the spotlight. The block party will cover five city blocks from Spring Street to Hope Street and from Temple Street to 1st Street.

Grand Park Director Lucas Rivera offered that this year’s fireworks show will light up the night, as the civic center comes alive in grand style. “After a day experiencing the sounds, sights and tastes of summer, we will see our own City Hall take on a starring role for the first time in a fireworks show that will surprise, delight and amaze,” Rivera said. 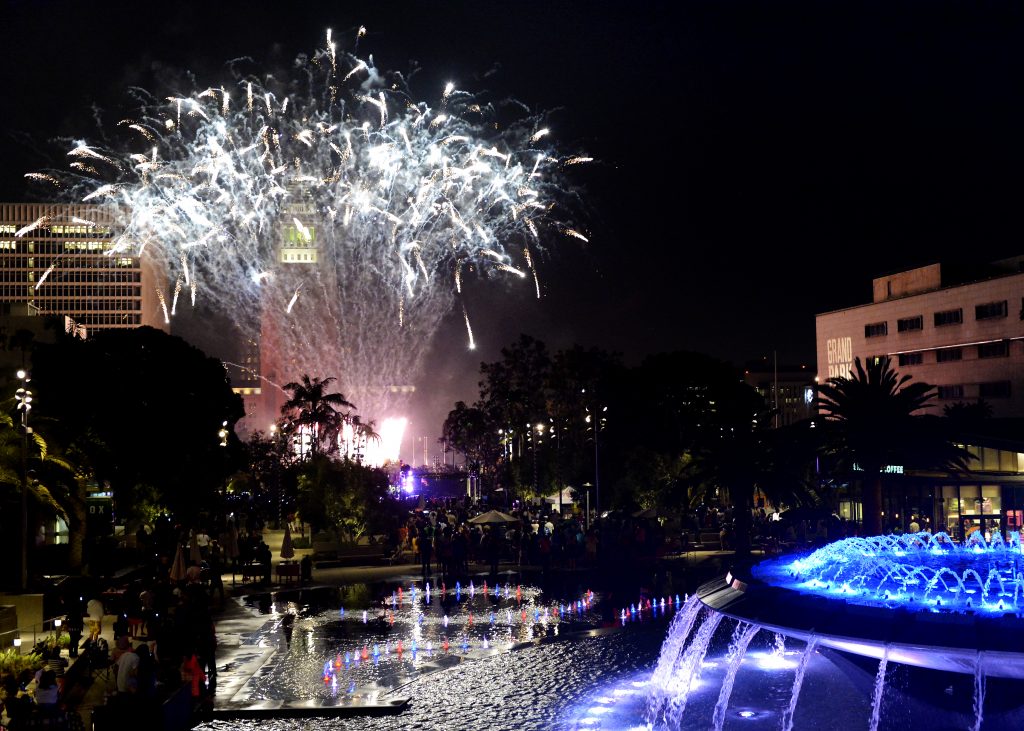 THE FIREWORKS STAGE (located on The Music Center Plaza between Hope Street and Grand Avenue)
Mario Hernandez (Host): Mexican-American comedian, actor and writer, Mario Hernandez was born in Texas, became a man in Brooklyn and became a father in L.A. Hernandez’s voice can be heard in commercials, movies and websites in both English and Spanish. He has hosted the main stage at many Grand Park events, including the highly popular Grand Park + The Music Center’s N.Y.E.L.A.

Kotolan: L.A. indie pop band Kotolan plays a mix of eclectic rock with a global influence with music rooted in vocal melodies and cinematic textures. The band is led by audiovisual artist Otto Granillo, who has performed and/or recorded for The Lions, Monophonics, Ricardo Lemvo and Makina Loca, Marc Anthony and Ozomatli, among others, along with lead singer Junko Seki. Seki, who sings in Spanish, English and Japanese, has performed as a solo artist in Mexico, Japan and the U.S., sharing the stage with the likes of Chicago icon Lalo Guerrero, Linda Ronstadt, Mariachi Cobre and Mariachi Sol de Mexico among others. Kotolan has appeared in both film and television and is currently in production of a string of boutique 45 vinyl records.

Jenny O.: L.A.-based singer-songwriter Jenny O. performs her own pop music compositions that have been recognized by the Songwriters Hall of Fame for exhibiting the qualities of Buddy Holly’s music that is “true, great and original.” Jenny O. recently returned to California to complete her second full-length album after spending a year writing and reading in Nashville. Starting out as a teenager recording on her father’s reel-to-reel tape machine, she kick-started her career with the self-produced Home EP and is now finishing a second full-length album. Jenny O. has toured with Father John Misty, Rodriguez, Ben Harper, Leon Russell and Rodrigo Amarante.

Dexter Story: Dexter Story and his Wondem band are a fresh, exciting face on the world music scene. Their debut album on Soundway Records fuses Soul, Funk, Jazz and Folk music with musical elements from East Africa. Wondem, which means “brother” in Amhari, is Story’s ode to Ethiopia, Eritea, Sudan, Somalia and Kenya and features a mix of musicians from Ethiopia and the U.S. on stage. Story is a multi-instrumentalist, composer, arranger, songwriter, producer and music director who has performed with a diverse array of musicians, including Wynton Marsalis, Ravi Coltrane, Ernie Watts, John Stubblefield, Slide Hampton, Jeff Narell and Eric Reed.

Echo Park Project and the dancers from the World Salsa Congress: Started in 2006 by Carlo Lopez, who brought the New York Salsa sound to Los Angeles, the Echo Park Project has backed traveling Salsa superstars Adalberto Santiago, Cano Estremera, Tony Vega, Choco Orta, Herman Olivera, Frankie Vazquez, Cita Rodriguez and The New Swing Sextet. The Echo Park Project has issued two CDs, Retro New York Salsa and El Viernes Social. Born in New York but living in Los Angeles since 1992, Lopez is a self-taught percussionist who has played Latin music for most of his life. As director of the band, Lopez infuses the legendary sounds near to his heart with a modern twist.
THE BACKYARD STAGE (located in Grand Park between Grand Avenue and Hill Street)

Kristin Rand (Host): Called the “next comic to watch” by Splitsider and a “force of nature” by LA Weekly, Kristin Rand brings high energy to some of the best stages across the U.S., including festivals such as Riot LA, Bridgetown and High Plains Comedy Fest. Rand is also a Moth StorySLAM champion.

LA JUNTA: LA JUNTA, or “the gathering” in Spanish, brings together people of all backgrounds in the name of friendship, dancing and music from points across the globe. At a typical gathering, LA JUNTA DJs take music lovers on a tropical sojourn to Brazil, Colombia, Peru, Africa, Cuba, Puerto Rico, India and Mexico and back to the underground clubs of the American metropolises. Guest musicians, dance ensembles and visual artists collaborate in unison to create a spirited outing for the musically adventurous and fun-loving folks who attend.

Rocky Dawuni: A Ghanian musician and activist, Rocky Dawuni straddles the boundaries between Africa, the Caribbean and the U.S. to create his appealing Afro Roots sound that unites generations and cultures. A galvanizing performer, Dawuni has shared the stage with Stevie Wonder, Peter Gabriel, Bono, Jason Mraz, Janelle Monae and John Legend, among many others. Named one of Africa’s Top 10 global stars by CNN, he has showcased his talent at prestigious venues such as The Kennedy Center, Lincoln Center and the Hollywood Bowl. Dawuni’s sixth album, Branches of the Same Tree, was released in 2015 and nominated for a GRAMMY for Best Reggae Album.

Francesca Harding and Ericalandia: Francesca Harding (formerly DJ Panamami) can be heard as co-host, producer and DJ on Los Angeles’ 90.7FM KPFK for Soundwaves Radio. Her DJ mixes have been featured on Jay Z’s blog, Life and Times, as well as on the El Sonido show on Seattle’s 90.3 FM. Harding was recently cast as a DJ on TNT’s hit show, Agent X. She has spun internationally for crowds in the UK, Mexico City, Colombia and South Korea and is currently working on her debut EP for summer 2016 release. A venerable DJ ninja, Ericalandia is a globe-trotting DJ, producer and music journalist. She sews together Future Soul, Future Bass, global/African music and has had a long-running, highly regarded radio show history and has recently appeared on East Village Radio, The Morning Show with Sway & Dublab airwaves.

Chris Douridas: Chris Douridas is among the premier radio tastemakers in the U.S. He has served as a long-time radio host at KCRW-FM, first at the helm of the station’s popular daily new music program Morning Becomes Eclectic, followed by a role as a weekly host and as the creator/curator of its long-running all-music channel Eclectic24. Douridas’ live performance series School Night! thrives as a weekly party in Hollywood and monthly in Brooklyn. He is a multi-Grammy-nominated music supervisor for feature films and television.

*Artists and schedule subject to change.

About Grand Park
A vibrant outdoor gathering place, Grand Park is a beautiful public park for the entire community in Los Angeles County. With expansive green space for gatherings large and small, Grand Park celebrates the county’s cultural vitality and is host to community events, cultural experiences, holiday celebrations, and many other activities that engage and attract visitors from all communities. The 12-acre Grand Park stretches from The Music Center on the west to City Hall on the east and is easily accessible by Metro via the Red/Purple line to the Civic Center/Grand Park station. The park was named one of American Planning Association’s 10 “Great Public Spaces” in the U.S. for 2013.

Working closely with the county, The Music Center is responsible for all operations and programming for the park. For more information, visit grandparkla.org Follow Grand Park on Facebook (GrandParkLosAngeles), as well as Twitter, Instagram and Snapchat (@GrandPark_LA).

Metro Access
Visitors to Grand Park can travel via the Metro Red/Purple Lines to Civic center/Park station (use the 1st Street exit; the Temple Street exit is open only for ADA/elevator access), or via the Gold Line to Union Station or Little Tokyo/Arts District Station (a 7-12-minute walk toward City Hall). Metro users are encouraged to load their TAP card with round trip fare in advance, either online or on their way in to the station, in order to bypass the TAP vending machine lines later in the evening.

Bike Parking
L.A. County’s Bicycle Coalition’s bike valet will be available on the intersection of 1st and Hill Streets.

Beverage Policy
Alcohol will not be sold onsite, and there will be a no tolerance policy for any alcohol brought to the event. All bags will be checked upon entry.

Getting Through Bag Check
All bags will be checked upon entry to event space.