– Asia’s Most Renowned Contemporary Dance Company Spotlights the Fragility of the Environment at The Music Center’s Dorothy Chandler Pavilion/January 29-31, 2016 –

Continuing to fascinate Los Angeles audiences with a diverse range of internationally renowned dance companies, Glorya Kaufman Presents Dance at The Music Center hosts Cloud Gate Dance Theatre of Taiwan, Asia’s most renowned contemporary dance company, in the Southern California premiere of Rice. With dancers trained in meditation, Qigong (an ancient form of breathing exercise), internal martial arts, modern dance and ballet, Cloud Gate Dance Theatre transforms ancient aesthetics into thrilling original performances and a modern celebration of motion. Created by Founder and Artistic Director Lin Hwai-min, who has been heralded as one of the most important choreographers in Asia, Rice is a human drama that calls attention to the need to protect the Earth by portraying the life cycle of rice cultivation – from death to rebirth, devastation and resurrection. The first contemporary dance company in any Chinese speaking community, Cloud Gate Dance Theatre of Taiwan will perform at The Music Center’s Dorothy Chandler Pavilion in a three-day engagement from January 29-31, 2016. 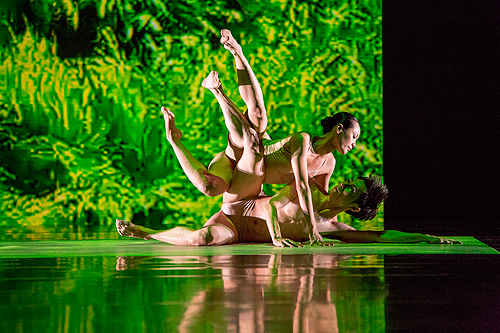 Rice was inspired by the landscape and story of Chihshang in the East Rift Valley of Taiwan, a farming village that was tainted by the use of chemical fertilizer, but which has now regained its title as the “Land of Emperor Rice” by adapting organic farming methods. Lin was awed by the immense waves of grain rolling across the expansive fields of rice and moved by the environmentally-conscious farmers. He took his dancers to the village where they joined the farmers in harvesting the rice and embraced the experience of working in the fields. His creation includes exuberant, powerful movements that are woven into his story of the land and the contemplation of the destruction of the Earth. To emphasize the messages, the production uses projection of vivid video images of flooding, growth, harvesting and the burning of the fields. The soundtrack mixes Hakka folk songs, using the oldest among the existing Chinese dialects; Western opera; Taiwanese and Japanese drums; and the sounds of nature – the rustling of grain, the rushing of wind, and the pealing of rain and thunder, all recorded on-site. 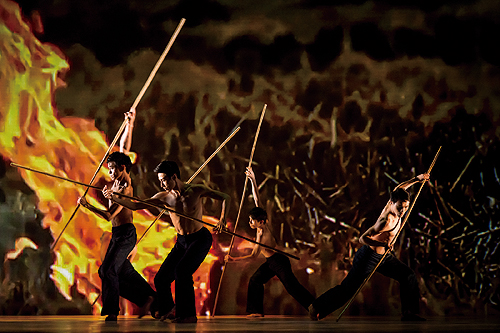 “The Music Center is pleased to present Cloud Gate Dance Theatre of Taiwan, which is an excellent example of our commitment to bring the most distinctive dance experiences to Southern California,” said Michael Solomon, associate vice president, The Music Center. “With Rice, Cloud Gate Dance Theatre of Taiwan delivers what it does best, weaving an otherwise simple storyline into a rich, powerful portrayal of the aspects of life we often take for granted. “The company draws on diverse, yet highly complementary disciplines, blending both Asian and Western influences and uses spectacular visual sets with giant projections that help relay the important message of reclaiming our planet. This is the first time The Music Center has presented a dance company from Taiwan on our stages, and we are excited for Los Angeles audiences to experience Cloud Gate Dance Theatre of Taiwan’s rich compelling performance,” Solomon added.

In order to completely represent the setting for Rice, a cinematographer spent two years on location capturing the cultivation of rice: flooding, sprouting, harvesting and burning of the field. These video images – of clouds reflected in the water, rice swaying in the wind, and fire ravaging the fields – have become the essential visual elements of the production. Immersed in this environment, the formidable Cloud Gate dancers enact a human drama parallel to the life cycle of rice, engaging audiences in a story about death and rebirth, devastation and resurrection. 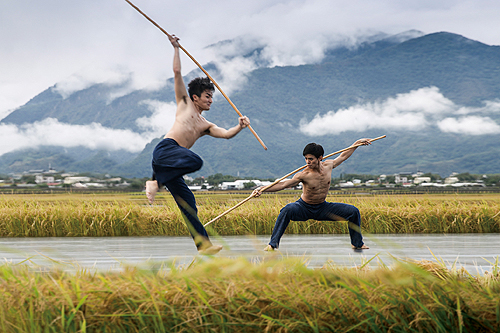 Rice was heralded by The Guardian as “a sharply moving synthesis of man and nature, east and west, death and rebirth…Lin’s own song of the earth.” The New York Times said, “Lin Hwai-min has succeeded brilliantly in fusing dance techniques and theatrical concepts from the East and the West.”