A Gaby Moreno concert is like a family celebration with music – stunning, soaring, shining joyful music.  All of that was on display at the auditorium of the Hollywood Forever Cemetery when Gaby Moreno sang Christmas songs for standing room only crowd of very, very happy fans. Moreno’s huge bright eyes, flashing smile and ever present twinkling tiara shown out over a forest of cellphone cameras and adorning faces. This was familia and it was Christmas…a jubilant, ringing, rocking unforgettable Christmas.

The waves of love that flowed from the seats as Moreno walked from the back of the hall to her waiting band on stage were palpable, and she sent the love back in equal measure. From the opening lines of “Pesces en el Rio” to the final shimmering notes of her encore, Moreno happily delivered  carols in English, Spanish and German from her new album Posada with the blues, rock, folk and pure delight she is loved for. The gift she brought Saturday night was generous – 15 songs, plus an encore, plus a surprise song she sang with the opening band, The Americans.

A LA resident now, Guatemalan-born Moreno tours almost constantly, recently wrapping up a circuit with the band Calexico this year and before that, a tour through Europe and Guatemala with the Punch Brothers.  But it is her electric solo performances that create the love on display at Hollywood Forever Saturday night, and earlier this year on the main stage at the Los Globos for a sell-out mostly Guatemalan-American crowd.  She fills a stage with movement, color, laughter and song like no one else. Saturday night she also filled it with friends, including the renowned Van Dyke Parks on piano, Jordan Katz on trumpet, Matthew Demeritt on saxophone, and Robert Carlos on requinto. 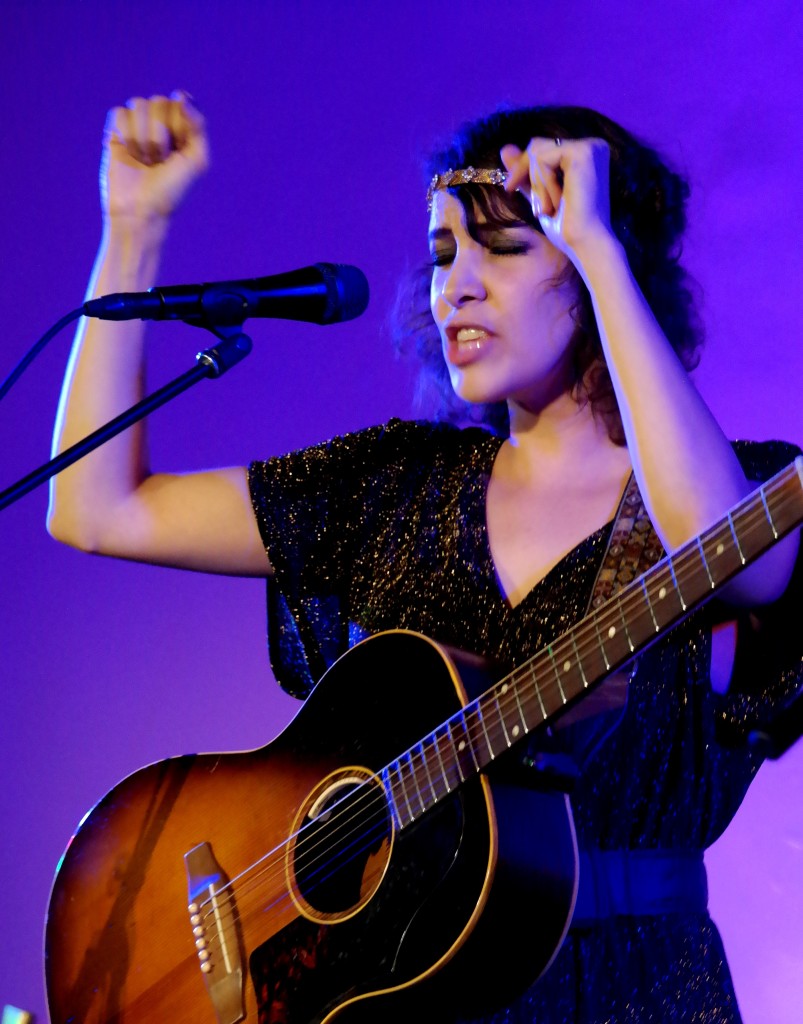 The opening song, “Peces en El Rio” began with Moreno’s trademark bell-like vocals in a melodic intro and then the band came in, with rock, blues and soul. The energy ramped up even more as she turned ”El Niño del Tambor” into a blues song with Arthur Braitsch getting down and dirty on the guitar, making it the best “Little Drummer Boy” I have ever heard and proving to millions that the radio-worn seasonal chestnut can be revived.

Musing to the audience that it is amazing to her that she is singing Christmas songs in a cemetery, she moved on in English to the seldom heard gospel staple “Golden Bells”, rocking the audiences with  Don’t you hear the bells a-ringin’/Can’t you hear the angels singin‘ bracketed by Braitsch’s bluesy/gospel guitar riffs.  She got down even more, belting “The Wrong Way to Celebrate Christmas” led off by a bass line from Leslie Lowe that resonated in your chest.

“Adeste Fideles” sung in English with horns provided by Jordan Katz, Matthew Demeritt, and David Ralicke, provided a traditional break from the bluesy interpretations, as did “Santa La Noce” and later on, “Noche de Paz” sung in Deutsch as “Stille Nacht”  in honor  of her German guitarist  As Moreno pivoted to the slow ballad “December” a woman tiptoed up to the stage and handed her a small gift-wrapped box, which elicited a very gracious “gracias” from Moreno and applause from the crowd. The box, carefully placed on the stool Moreno was using for her music remained there as she finished “December” and picked up the pace with “Go Tell It On The Mountain”, flanked by backup vocalists Lucy Woodward and Erica Canales and harmonica player Vincent Henry.

The blues came back in force with “At the Christmas Ball” played by the band with Belmont Tench on piano and them Van Dyke Parks took the keys for a rhythmic “Oh Pueblecillo Belén”, a far more interesting and entertaining version that the usual “Little Town of Bethlehem” heard in Christmas pageants in schools across the country.  Parks stayed with her through the Spanish children’s song Hacia Belén Va Una Burra Rin Rin” . Tench, formerly of Tom Petty and the Heartbreakers, returned to the piano for “Have Yourself a Merry Little Christmas” before Moreno took up the cowbells and got the entire room clapping and singing for the finale, “Mi Burrito Sabanero”.

But of course it wasn’t a finale. The crowd’s standing ovation quickly turned into chants of “mas” and “more” and they were rewarded with smiles, jokes and songs.  When it was finally over, Moreno was mobbed — gently – as she left the stage, posing for selfies, hugging fans, carrying the love from the stage to the aisles.

Christmas carols with Gaby Moreno was an  early gift to Los Angeles; everyone at Hollywood Forever will take home the memories of the night, not to mention the photos and videos and copies of Posada CD, just leased by Cosmica Artists and Records and called an “instant classic Latin Christmas hit” by Billboard. It was easy to see why Moreno won the 2013 Latin Grammy for Best New Artist.   An unpatrolled voice, an infectious combination of Latin music and blues and folk and rock, combined with an innate ability to bond with fans.  We loved Gaby’s music Saturday night and we fell in love with Gaby herself…again. 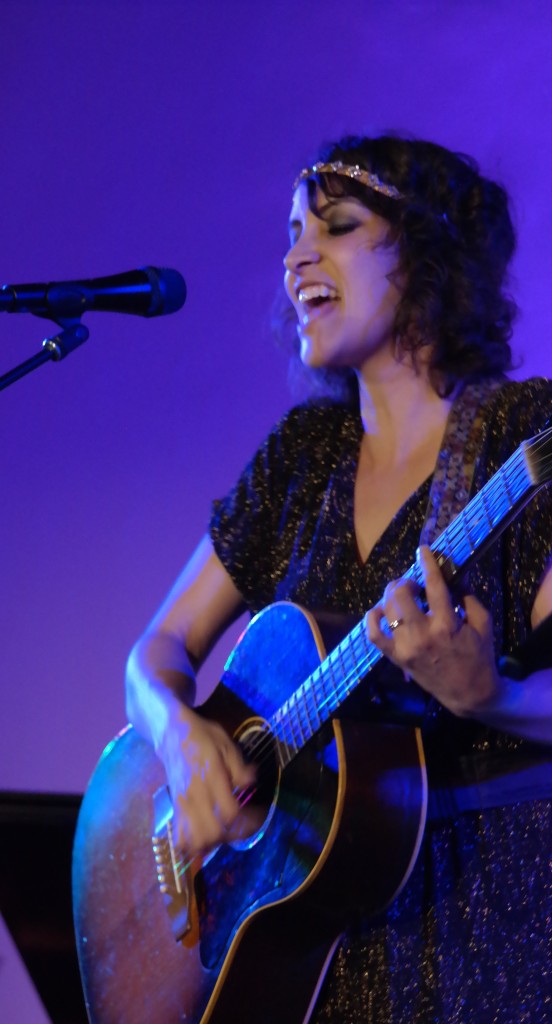 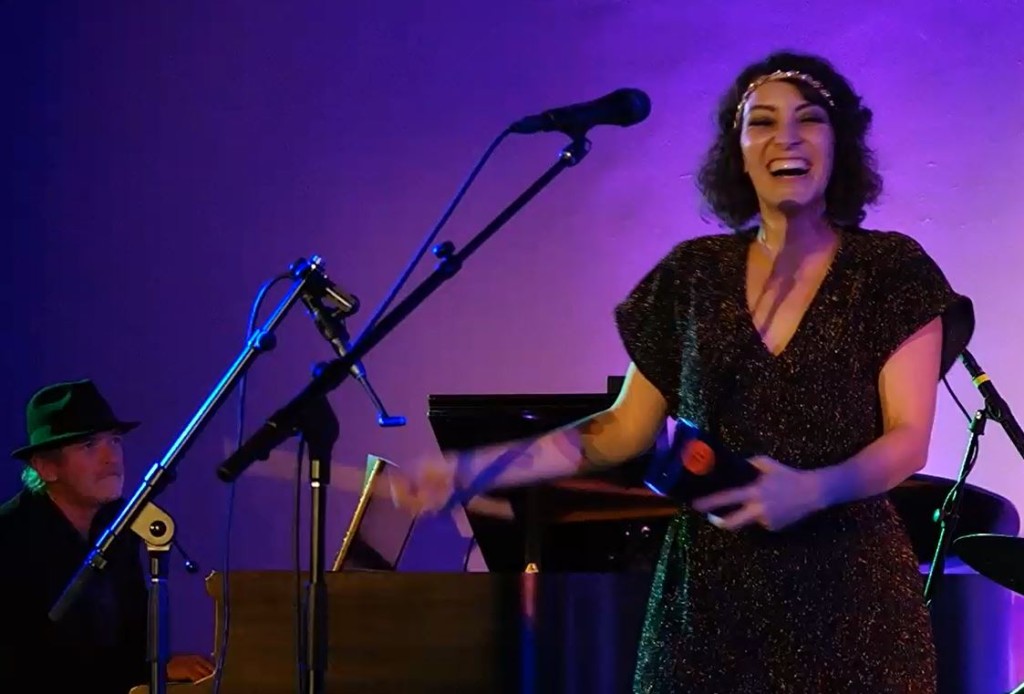 Available at http://www.cosmicaartists.bigcartel.com/ and iTunes