Gaby Moreno at the Roxy: love and joy with a guitar

Gaby Moreno at the Roxy: love and joy with a guitar

Home » Featured » Gaby Moreno at the Roxy: love and joy with a guitar 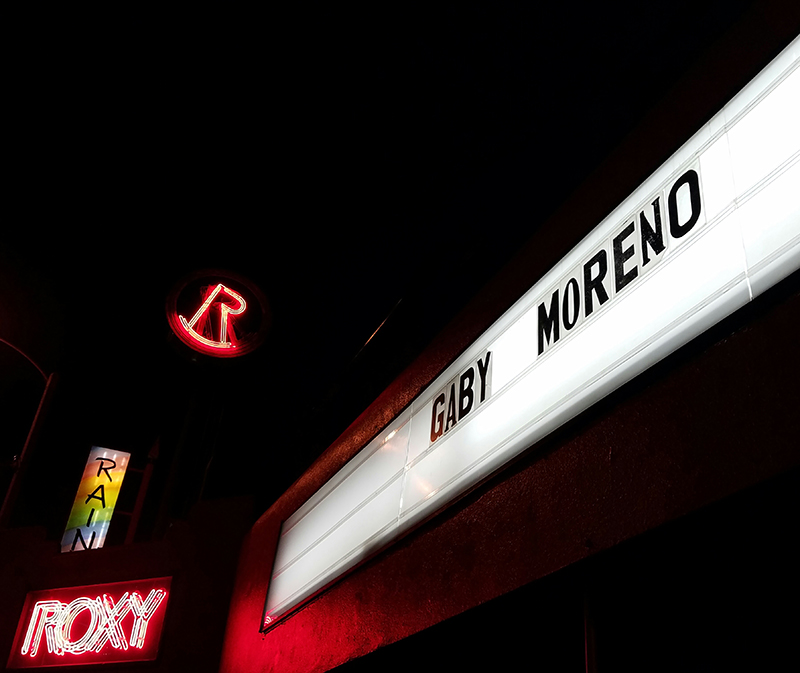 Any concert with Grammy nominee and Latin Grammy winner Gaby Moreno is an inspiring experience, but to see her in an intimate setting with 400 of her closest friends makes it clear why people lover her so much.  She is stunning, inspiring and completely authentic.  With a voice that transcends octaves, a songwriting talent in English and Spanish that opens minds and hearts, and a sense of humor that is as engaging as it is humble, her music says “star” while her presence says “love”.

Her concert at the Roxy – her first time there ever – was both intimate and expansive;  her voice filled the room while her smile and her words – and yes, her tears – pulled each person close. Gaby Moreno gave us an unheard of 19-song set, interlaced with self-deprecating humor and stories, laughs a mention of her theme song and character in the Disney series Elana of Avalor , and then came back for an encore that blew the roof off of the newly remodeled Hollywood music palace.

“This is really my album release show” Gaby joked to her fans, referring to the just released album, Ilusion,  nominated this year for a Grammy for Best Latin Pop Album. The Grammy nomination was a surprise, she told us.  She was on a plane when the nominations were announced and when she got off, her phone exploded with so many texts, calls, and emails that it took several minutes for her mother to get through and tell her the news.  She wiped her tears away as the audience cheered and shouted congratulations;  then she stood up straight, flashed her million-watt smile and started to sing.

And sing she did, for the next hour and a half, delivering songs from Ilusion, Posada, Postales, Illustrated Songs and even her Christmas album.  Talking and singing fluidly in both Spanish and English, Moreno, who admitted to only 2 hours sleep,  led the audience through her musical life, and judging from the majority of the crowd who seemed to know every song, theirs too.

The fans were more than ready.  The Roxy filled up early; it was three quarters full at 8 pm when Bjorn and the Sun came on stage and energized the room with their country pop songs and world class guitar riffs.  By the time Ilza Rosario, also beloved by the audience, stood onstage with her arms outstretched and her movie star smile lighting up the room, it was packed and happy. Rosario was the perfect introduction to Moreno.  Her heartfelt songs delivered with an intensity, clarity and an innocence that belied her skin-tight leotard and plunging neckline, set the tone for the kind of personal, authentic musical encounter that illuminated the night.

Moreno was joined onstage by her full band: Arthur Braitsch on guitar and mandolin, the superbly talented Elizabeth Lea on trombone, Jennifer Condos on bass, Jordan Katz on trumpet and banjo and mandolin, Matt DeMerrit on sax, Patrick Warren on keys and accordion, and  Sebastian Aymanns on drums. The horn section not only added a new depth and variety, it was obvious that Katz, Lea, and DeMerrit were really, really enjoying themselves – and we enjoyed watching them.

After opening with her new single, “Se Apago”, in Spanish, she moved to “Pale Bright Lights” in English, both from the new album.  Before turning to “Ave Que Emigra” she laughingly said that, like the bird in the song, the song itself had migrated from one album to another.  “O Me”, was followed by her Spanish revision of Sam Philip’s song “Herman Rosetta”  which paved the way for the song the audience had been waiting for, “Fronteras”.  The largely Latin audience, wondering about their future lives in a Trump America, sang along with Moreno.  But she leavened the intensity of “Fronteras” with the fun of “Solemncholy”,  and then moved to her beloved blues with ‘Mess a Good Thing” from her Illustrated Song album, and the deep and dirty blues “Down in Reverie” and “Nobody to Love”.  She traded her guitar for a tambourine and, with just a drum backing her, quieted the room with the powerful “Salvese Quien Pueda”.

But the most powerful moments of the night were her solo of “Illusion”.  Standing alone with her guitar, her voice showing no signs of the travel and lack of sleep, she held notes longer and higher and clearer than seemed humanely possible. If you closed your eyes, you could imagine the stars and galaxies singing directly to you, life’s a despairing illusion, until he comes back to me.

As the last notes of “Illusion” hung in the air, Gaby held onto the mood with “Estare”, stretching notes impossibly long.  But then she moved into the stretch, keeping up the pace and moving effortlessly between albums while bringing back the horns in “El Sombreron” and “Blues de Mar” from Postales, “Maldicion/Bendicion” from Ilusion and “Peces En El Rio” from Posada.  She had fun with “Hacia Belen Va Una Burra Rin In”, laughing with the Latinos in the audience about singing it every Christmas as children.

Gaby reached back to her 2011 Illustrated Songs album for the climax of the evening, “Sing Me Life” delivered as anthem that could have filled the Hollywood Bowl, before she wound down with cheers, thank yous and  Elizabeth Lea’s final trombone notes.  And of course, the cries of “otra” from the fans brought her back on stage for an encore, “La Maleguena”,  ending with what is likely the longest, highest, clearest note ever hear in the Roxy.

Guatemalan born, American raised, world traveled, Gaby Moreno is the leading edge of the second wave of the American Latino Music revolution boiling in Los Angeles. Following the trail blazed by Ozomatli, Los Lobos and hundreds of mariachi and ranchero bands that have entertained in and adapted to what is now the second largest Spanish-speaking city in the world, Moreno brings a level of talent, an inner radiance, an ease with bi-cultures and an authenticity that makes her both unique and a leader in the love and joy that music can bring to the world. She certainly brought it to the Roxy. 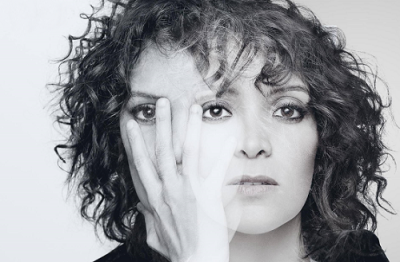 Ilusion is available on the website, iTunes, GooglePlay and Spotify