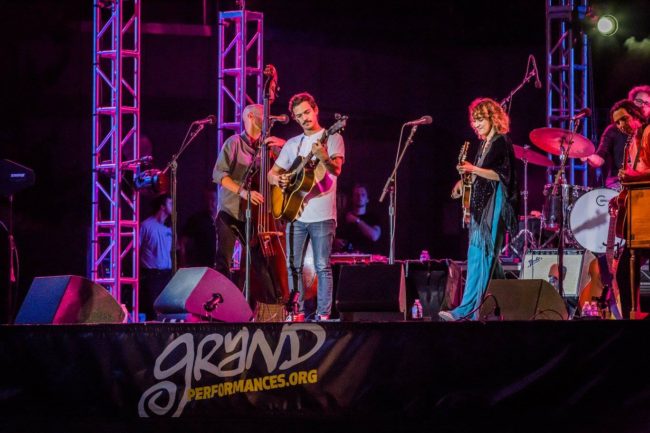 Gaby Moreno and  Caloncho created a magical night Saturday at Grand Performances in California Plaza in downtown Los Angeles.  About 2000 people filled the two-level sunken plaza,  facing a sparkling pond in front of the expansive stage, backed by dancing water spouts and skyscrapers sporting the projected Grand Performances logo.  Lights twinkled all around, families opened picnic baskets or  queued up at the restaurants surrounding the Plaza and the bars in the Plaza.  They settled into chairs or brought their own while the sun went down, auguring the arrival of música especial.

Accompanied by urban sound effects, Caloncho and his band filtered on stage, plugged in and took their positions.  The party was on as the Sonoran-born, Guadalajara-based singer songwriter kicked it off with his soothing summer night anthems of soft tempos and Latin indie-dream pop, animated by a very active trombone/keyboard player who added not only notes, but humor.  At one point, the fans’ heroine, Guatemalan-born LA-based Latin Grammy winner Gaby Moreno joined Caloncho, eliciting applause so loud the music was almost drowned out.  Almost.

Caloncho is brilliant at audience engagement.  While many fans knew the words to his songs, he went beyond fan singing and clapping with the band.  At one point he had the entire plaza pull out their cell-hones, turn on a light and wave to the music – it was 2000 again!.  And then there was the dancing – the Plazas expansive cupula exploded with happy dancing people, whom he saluted and encouraged. 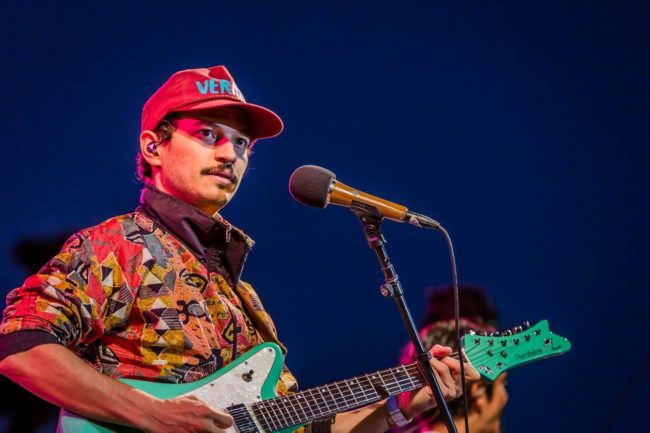 The sun was down, the lights were up and the stars were out when Moreno and her band mounted the stage. As always, one of the most remarkable things about a Gaby Moreno concert, whether in a small venue or a an amphitheater, is how much she is loved. You can feel the adoration flow from the seats, the lawn,  the balcony —  from an audience that is ecstatic. And she returns the love with stories, a smile that can illuminate the balcony seats, and music that fills souls while it crosses genres, languages and borders.

Gaby launched the evening with her new single “Se Arpagó/Love is Gone”  from her most recent release, Ilusión,  her operatic voice soaring over the plaza as she hit the high notes, backed by a comfortable beat and David Garza’s stunning guitar chops. Twelve more songs followed, including two solos, “Ilusión” and “Daydream by Design”.   Caloncho joined her on “Blues de Mar” and she ended the evening with “Maldicion, Bendicion”, inevitably setting off cries of “otra” for just one more song.

Moreno’s set ranged over three albums, with the majority from Ilusión, but she reached back to her 2011 album Illustrated Songs for “Garrick” and “Daydream by Design” and to the 2012 Postales for “El Sombreron” and “Blues de Mar”, all familiar enough to the audience that many people hummed along.  The most moving moment of the night was when she dedicated her song “Fronteras” to people worried about their status in the USA.  Some  in the audience, she noted, were likely to be in that category and there were cheers and tears as she sang “this is where I belong” in Spanish and English.  Like La Santa Cecilia’s “El Hielo”, Moreno has produced an anthem for today’s immigrants, one that is uplifting and defiant, as it should be. 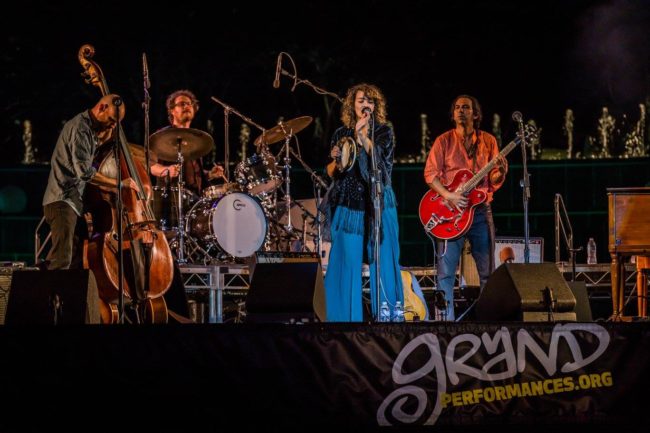 Moreno spiced the night with a story about her grandfather and the song “El Somberón,  background on other songs, and frequent expressions at her joy and gratitude to the audience for being there and supporting her.  It is no wonder that she was named best New Artist in the 14th Annual Latin Grammy Awards, as well as being nominated for an Emmy in 2010 for the theme song for Parks and Recreation which she co-wrote, along with many other honors and awards.  There is simply no one like her in music today in any language

Moreno leaves this week for the Festival Chispa in Albuquerque, NM, and continues on to the Latin Festival Milano in Italy and Montreux Jazz Festival in Switzerland and then throughout Europe in July and again in the Fall.  Grand Performances 2017 continues through Oct. 13 with music, theater and even lessons in beer tasting.  Launched in the late 1980’s and incorporated as a non-profit in 1997, Grand Performances is one of the largest presenters of free performing arts in Southern California and is a national leader as an innovator the arts and in  introducing local talent and international artists to a diverse Southern California audience. Performances are free to the public (although you can join to help support the performances and get special seating and other perks). Details at www.grandperformances.org

Gaby Moreno. https://www.gaby-moreno.com/
Ilusión and her other albums are available on the website an all online outlets